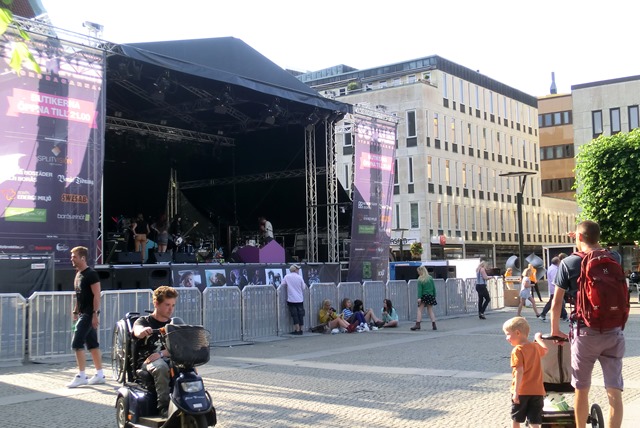 It’s too hot just now to do any serious blogging.

Yesterday we went from rather pleasantly warm/hot to clammy, headachy hot. The indoors temperature rose to above 26° (79°F) which I’ve come to recognize as my “limit”. Above that I get irritable and grumpy!

(That does not mean I never get irritable below 26°C. Above 26° it’s more predictable, though!)

Living in a town flat, evenings also tend to get very noisy when everyone keeps their balcony doors and windows open because of the heat.

One of the major things to irritate me is people who seem to think they “own the world” (like playing their music as loud as if they had no neighbours for miles around). And one of the things that mystify me is why people seem to want ther music four times as loud in summer compared to winter, anyway.

I shut my balcony door and windows when going to bed (if not before), but when I wake up later in the night (as I invariably do) I open up to let some cool night air in. This night I got a few hours exhausted sleep after midnight, then was awake 3:30-7:30, then fell asleep again and slept until 10. Well, I guess I should be thankful (and I am!) that at least I’m free to do that… It makes an odd start to the day though.

The day did not get better when I turned on the computer and found trouble with my Yahoo email. My emails are there but I can’t open them. It must be their server as the same thing happens on the phone app.

Nothing much I can do except wait and trust that they’re working on it, I suppose!

In the meantime, I’ll have to go into town for a while after lunch, and I suppose I might as well stick to that plan; as it will be hot at home anyway.

But I’m not going stay in town until evening…

The photo is from two Thursdays ago. On Thursdays in July the shops in the town centre are open later than usual, and then there are free concerts in the square. A tradition since many years, and very popular. Often the square and the streets nearby are packed with people during the concerts. As I’m not fond of crowds and very loud music, I’m not in the habit of attending, though. This photo was taken in the late afternoon and I bet the girls sitting by the fence below the stage were already “queuing” for a good place.

One thing for which I’m truly thankful (especially on summer Thursday nights) is that I do not live in one of the buildings right next to the town square! In fact, I live just far away enough from the town centre not to be bothered by these events. Just now I keep my fingers crossed that the noisy neighbours will be going, though! (i.e. not stay home and play their own music)

Posted by DawnTreader at 13:08