Book Review: The Book of Nonsense 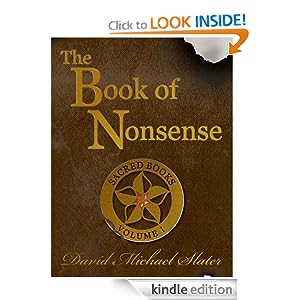 The Book of Nonsense (Sacred Books 1)
by David Michael Slater
****

The Book of Nonsense is the first book in a Young Adults fantasy series by David Michael Slater. (It was temporarily free for Kindle when I downloaded it.)

Daphna and Dex Wax are twins, but very different from each other. Daphna takes after their father, Milton, who is a book scout; i.e. he travels the world in search of rare books, and sells them on to others with the same interest. Dex does not share their interest in books. (We learn more about the reasons further into the story.)

On the day before the twins’ 13th birthday, Milton comes home from one of his journeys, bringing a very old and tattered book. Daphna meets him full of enthusiasm: a new Antiquarian Book Center (ABC) has recently opened in town. It is a really amazing place, and she is eager to show it to her father.

The ABC is run by a very old man, with a young and weird-looking assistant. When Milton goes to meet the shop-owner, Daphna follows him (to the middle of the labyrinth of bookshelves in the shop). The conversation between her father and the shopowner that she overhears puzzles her, as it does not at all follow the usual routine when her father tries to sell books…

From the very first page, we get right into the action in this story, and the fast pace is kept up all the way. I found it to be a page-turner, hard to put down. However, it is a story with a limited set of characters. There are vivid descriptions of details, but the background remains hazy, and the action takes place within just a couple of days (around the twins’ 13th birthday). Within that time, they do also learn some things about the past, though – and I suppose further explanations might follow in the sequels.

My spontanteous feeling at the end was that this book could have been made into a really good stand-alone fantasy novel. The fact that it is the first in a series makes me hesitate. I’m not sure if I’m really interested enough to invest (time and money) in the next one as well (and the next, and the next, and…) I’ll let the decision rest for a while. Time will tell whether the story will linger enough in my mind to tempt me to follow Daphna and Dex on more adventures. (There are three more books in the series published so far, I think.)

If I had fantasty-loving young teens in the family, though, I think I might consider the Sacred Books one of the better series of its kind to recommend (based on the first one).