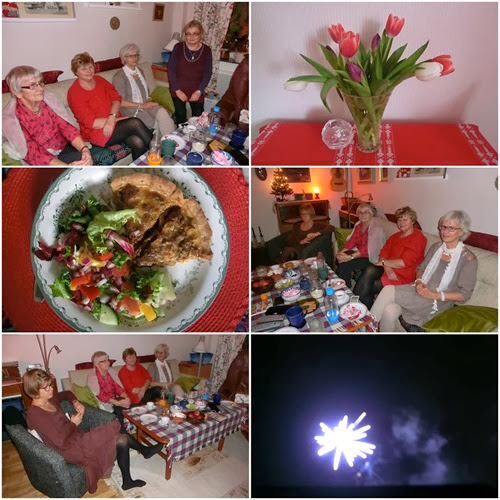 For those of you wondering, the film we ended up watching this last (!) year was The Best Exotic Marigold Hotel (from 2012), with among others Maggie Smith, Penelope Wilton and Judi Dench. (It turned out I was the only one who had seen it before.)

“The New Year never quite starts with a clean slate (plate)...” And if you’re wondering who said that, it was me, this morning! Just a philosphical observation, mind! – not meant to imply that I was left with all the work. (My friends did the first round of washing up after dinner, as well as brought some of the food and drinks consumed during the evening.)

New Year’s Eve is usually the only night in the year nowadays that I stay up after midnight. Even if I weren’t having guests, it would be impossible for me to go to sleep early anyway, because of all the fireworks going on outside all evening, culminating during the hour around midnight.

Luckily, today, on New Year’s Day, I’m free to be as lazy as I please. I think of it as a sort of in-between place, like the Wood between the Worlds in The Magician’s Nephew by C.S. Lewis: “It’s not the sort of place where things happen. The trees go on growing, that’s all.”

Hope you all had a good start to the new year.

Posted by DawnTreader at 17:42