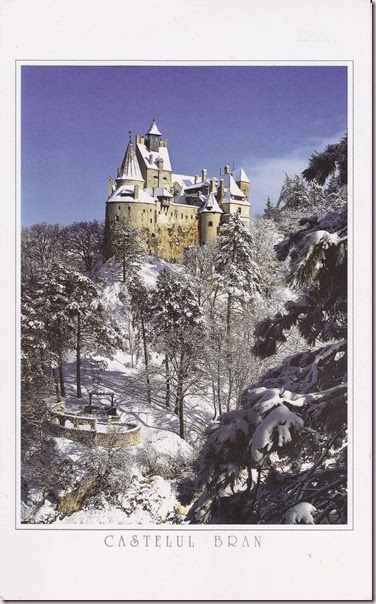 Commonly known as "Dracula's Castle", this castle is marketed as the home of the titular character in Bram Stoker's Dracula (1897). The author never actually visited Romania, but is thought to have based Dracula’s castle on a description of Bran Castle that was available in turn-of-the-century Britain.

I was fascinated to receive this card and to look up and read a bit more about Bran castle, as I read the original novel by Bram Stoker only a few years ago, and found it a much better read than I had expected. (Not really being a big fan of vampire stories or movies otherwise.)

The original Bran castle was built ~ 1377-1388. The Castle was damaged and restored a number of times through the following centuries. Between 1888-1918, it was allowed to fall into decay, and was just used to house the region’s forestry staff.

After 1918, Transylvania became part of Greater Romania. The castle was restored by Queen Maria of Romania, and used as a residence of the royal family.

After WWII, the royal family was forced to leave the country by the communist regime, and the castle was turned into a museum.

In 2006, after several years of legal proceedings, the castle was returned to the heirs of Princess Ileana of Romania and Archduke Anton of Austria. In 2009, they opened the refurbished castle to the public as the first private museum of the country.

You can read more about its history here:
http://www.bran-castle.com/history.html 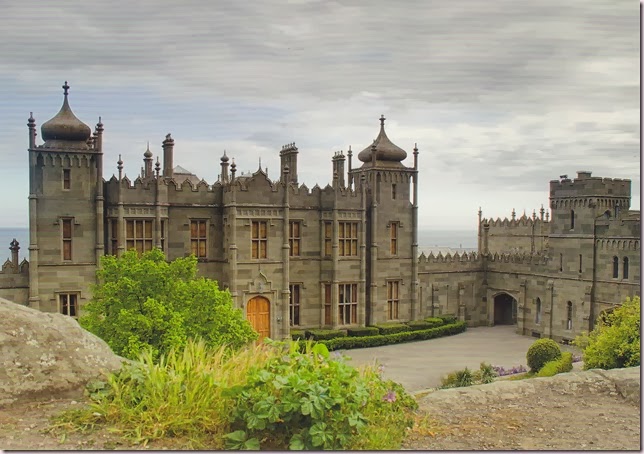 The Vorontsov Palace, or Alupka Palace, is situated at the foot of the Crimean Mountains in southern Ukraine, near the town of Alupka. It is one of the oldest and largest residential palaces in Crimea, and a popular tourist attraction. The palace was built 1828-1848 for Prince Mikhail Semyonovich Vorontsov for use as his personal summer residence.

The palace was designed in a loose interpretation of the English Renaissance revival style by English architect Edward Blore and his assistant William Hunt. Blore is particularly well known in the UK for completing the design of the Buckingham Palace in London.

Posted by DawnTreader at 21:11