“After some trial and error, it seems I have created a blog!

In choosing the title, I had in mind the Island of the Voices in C.S. Lewis's The Voyage of the Dawn Treader, where Lucy enters a Magician's House to find the Magician's Book, and within that book A Spell to make hidden things visible.

She read it through to make sure of all the hard words and then said it out loud. And she knew at once that it was working because as she spoke the colours came into the capital letters at the top of the page and the pictures began appearing in the margins. It was like when you hold to the fire something written in Invisible Ink and the writing gradually shows up...

I really have no clear idea yet what hidden things I want this blog to make visible. But maybe if I start writing, I will find out...“

3 years ago, for technical reasons, I had to move the blog to a new account, and in connection with that I also changed the name to Beyond the Lone Islands.

What I wrote then also still remains true:

“My very first blog post has remained kind of prophetic to me. I had little idea back then how hooked I would get on blogging, how much it would inspire me to keep up both writing and photography, and how many new friends I would be making around the world... And yet I obviously sensed the "magic" and the spirit of adventure involved already at the very beginning; or I would not have chosen the names that I did.”

Something I consider really amazing is that after five whole years, I’m still in touch with several bloggers that I came across very early on, back in 2009. A special thanks to you. I won’t name names, as time is far from the only factor in friendships. But please know that I’m really glad that you’re still here! 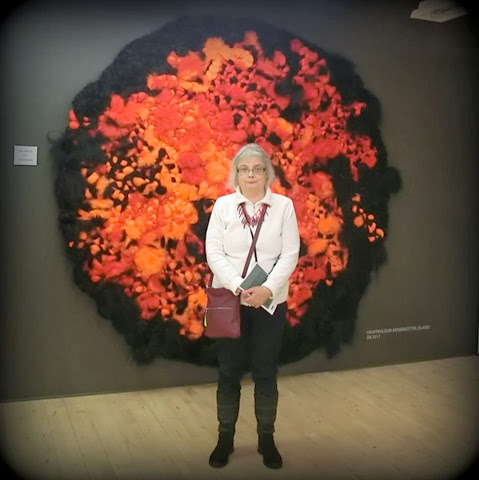 PS. The photo was taken at an art exhibition I visited yesterday together with my aunt and uncle. There will be a few more photos from that occasion coming up in a separate post.

Posted by DawnTreader at 01:00