I can’t remember Wilkie Collins ever being mentioned back in my English Literature studies (long time ago); but looking him up now, I learn that he was a contemporary and friend of Charles Dickens; and The Moonstone originally published in Dickens’ magazine All the Year Round.

Collins is also mentioned together with Dickens in Baugh’s A Literary History of England, which sits in my bookcase (a heavy volume of 1800 pages that does not get taken down very often now that it’s so easy to look things up online instead).

It seems they both had some influence on each other:

Dickens’ shift from novels of humous character to novels of sensational intrigue was partly due to Collins’ precepts and example. But there are differences. Whereas Dickens conceived his characters and then invented a plot to set them in motion, Collins invented his plot and then fitted characters into it. 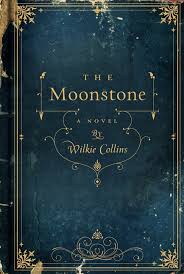 The Moonstone is an “epistolary” novel, told in basically chronological order, but at the same time narrated through a number of different charcaters, each adding their own perspective and “flavour”. The story also turns out more complex than one might at first be deceived to believe; time and again we are sidetracked and led astray along with the narrators, as each of them can only see the events in his/her own light, and no one (for a long time) understands to interpret all the facts correctly.

The moonstone is a precious jewel originating from India – its background is explained at the very beginning of the novel, but most of the story takes place in Britain (in the late 1840s). The style of Dickens did come to mind for me often during the reading; but the first parts, narrated from the perspective of servants at the big country estate where the events take place, also led my thoughts to the recent (and still to be continued, I think) BBC TV series Downton Abbey.

Actually, one aspect of The Moonstone that strikes me as kind of “ahead of its time” compared to many other novels from the same period, is the fact that the narration does include the perspective of both masters and servants.

Parts of the story tend to get a little long-winded; but at the same time, suspense is kept up. I think one has to consider that it was originally published in episodes not unlike modern TV series (like Downton), with parts of the events getting explained or solved along the way, but other things still remaining a mystery until the very end.

As for the final whodunit revelations, I could say that at some point earlier I did sort of guess at it – I think – but then again, I could probably have said the same whoever turned out guilty, as suspicions did tend to shift quite a few times along the way!

I would recommend this book to those who also enjoy for example Dickens, detective stories like Arthur Conan Doyle’s Sherlock Holmes – and upstairs / downstairs series like Downton Abbey!

I can also recommend the Audible companion to the Kindle edition of the book, read by James Langton; a very enjoyable narration. (I read some chapters on Kindle, and listened to others.) The ebook was free and the audio addition cheap ($3.44).

A question on the theme of
Love Stories
from DEB at Booking Through Thursday
(February 12, 2015)

“I’m not asking if you like romances … what I want to know is what is it about stories that you love? Is it the stories themselves? The people? The plot twists?”

Timely question for me, as was thinking about that while reading the book reviewed above anyway; and not least when pondering about the quote from A Literary History of England, about the difference between Dickens and Collins – Dickens inventing the characters first, and then the plot; Collins starting with the plot, and then fitting characters into it.

While I do appreciate a clever plot with twists and turns, it is often the characters, and also the “setting” of a novel (if well described) that stay with me in the long run, rather than the details – actually, astonishingly often, even such details as who in the end turned out to be the murderer in a murder story.

I suppose the best books are really those where it all comes together and both characters and some of the basic plot stick in memory, but which are also so well written that you can still enjoy rereading them after a certain time.

With The Moonstone, just having finished it, I feel that some of the characters stand out more than others; and not all quite in relation to their importance to the plot. There are also some plot twists in this book that might well have a potential for being memorable. And I guess the fact that it still seems to be quite widely read after nearly 150 years supports that many find it still standing up rather well to the Test of Time.

Posted by DawnTreader at 13:48