This was the third royal wedding in Sweden in a period of five years – but now we’ll have to wait a long time for the next generation of princesses (and maybe princes-to-come) to grow up. (Princess Estelle, daughter of the Crown Princess, is the smallest of the three girls to the right in the official group photo above.)

These three weddings have been a boost for the popularity of our royal family; and each one of them also unique in their own way.

▼In June 2010*, Crown Princess Victoria made a prince out of Mr Daniel Westling, former gym-owner and personal trainer (now His Royal Highness Prince Daniel, Duke of Västergötland).  They made their wedding a public affair – not only the wedding ceremony in the church but also the dinner party and speeches afterwards was broadcasted live.
*(Link to my blog post from that wedding.)

▼In June 2013, Princess Madeleine married British-American businessman Christopher O'Neill. Mr O’Neill was offered the title of prince too, but declined, as he wasn’t keen on all the fuss and trouble that comes with it (like assuming royal duties and having to change his citizenship). Princess Madeleine remains a Swedish Princess, though. Their wedding ceremony was public, but the party was kept private.

Carl Philip and Sofia followed the example set by Victoria and Daniel. I think this couple actually had many of us charmed even before the wedding, with their relaxed way of handling various interviews since their engagement.

The wedding ceremony was held in the Royal Chapel within the Palace. It offered some surprises, as they had chosen rather untraditional music for a royal wedding.

(I wanted to insert a YouTube clip here of their exit from the church which was accompanied by gospel music and everyone clapping hands, but seem unable to embed the video. Hopefully you can reach it through the link.)

The room in the Royal Palace in Stockholm that was used for the wedding dinner. – kungahuset.se

The dinner party afterwards was also broadcasted live. Cameras were off while they were eating (we then got snippets of other info instead, for example about the guests and dresses and food etc). But we got to see the various courses served, and hear the speeches – the King (father of the groom), then the father of the bride, the groom himself, and even a few words from the bride, introducing a song written especially for her husband.

Those of us who managed to keep awake until midnight and after also got to see the wedding cake cut, and the newly-weds opening the ball with a waltz.

I had initially only planned to watch the wedding ceremony and cortege in the afternoon, and then perhaps glimpses now and then during the evening… But I actually ended up watching pretty much the whole thing – i.e. from 3 pm until 1 am = 10 hours! 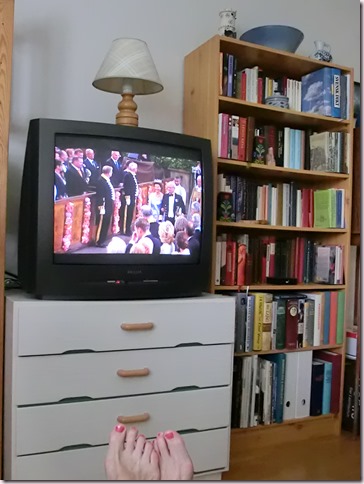 I bet some of the ladies in the wedding party were wishing from time to time during the evening that they’d been able to take off their shoes, too… 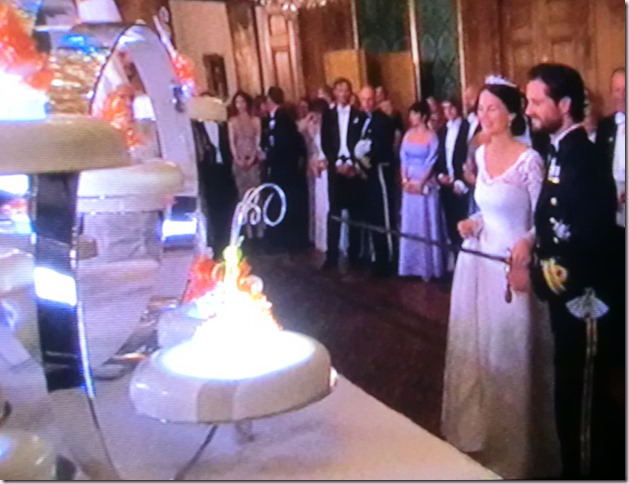 The Prince cutting the wedding cake with his sword, close to midnight… (off my TV screen)

Posted by DawnTreader at 18:13