For my first Advent Calendar post, I open my top kitchen drawer and take out this: 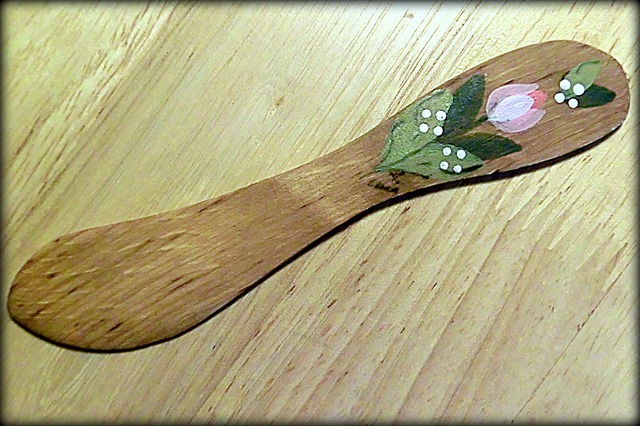 Question for my non-Swedish readers: Do you even know what it is? If not, I hope the next picture will give a pretty strong clue… 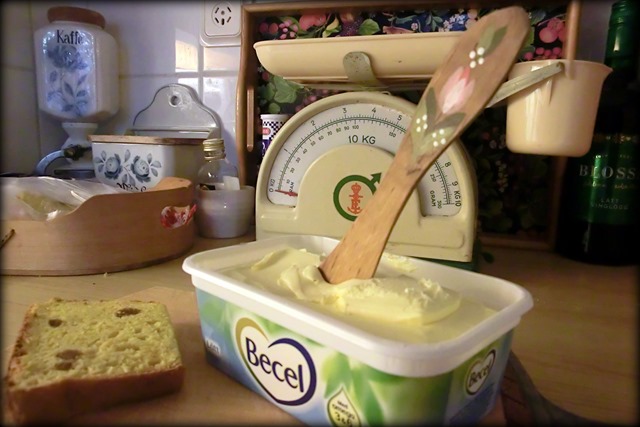 We use wooden butterknives like these a lot in Sweden. At the breakfast table etc it’s common practice to just put one in the butter dish like this (rather than everyone having their own).

This is a particularly nice one though, as it’s not just handcarved but also decorated in traditional folk art style. I actually have two of them - they came as a pair. I’m not sure how long I’ve had them – at least 10, could be 20 years or more. I’m pretty sure I got them from a penfriend living farther up north in Sweden, with whom I’ve been in correspondence ever since our childhood - 50 years next spring! (Not so much nowadays as we’re both more or less handicapped when it comes to handwriting – she more – and she does not use a computer either. With the help of an assistant she sent me a surprise birthday present for my 60th though – which you will be seeing at the bottom of this post.)

Besides the giver, the butter knife also brought other things to mind. For example: In my childhood, butter was actually butter; while nowadays it’s margarine and a whole separate science of percentages and saturated vs unsaturated and Omega this and that. Real butter kept in the fridge was hard and not all easy to spread on a piece of bread (and that’s still the case, I assume, if you use the real thing). When bread and butter was to be put on the table when we had guests, my mum used another special little flat ribbed wooden tool with which to carve it, so that it could be put in elegant rolls on a plate. (I no longer have that tool, but it looked something like this.)

Butter also always makes me think of my maternal grand-father, who was a firm believer in butter as a panacea for any minor injury. (If you scraped a knee or or something – put butter on it!)

The scales in the background in the second photo belonged to my paternal grandmother. To the right of the scales you also see an old coffee-grinder and flour-jar that I think were hers as well, or else her sister’s (who died before her). Anyway, the coffee ground in that grinder would have been the kind to be boiled, not brewed. The bread basket belonged to my mother and is not all that old, but that too is a handcrafted object made in an old woodbending technique. (These things always have their place on my workbench – not hidden away in cupboards or drawers!)

And the piece of bread is my special Advent time saffron bread, made in my bread-maker - a compromise recipe I invented after my injury years ago (after which it became difficult for me to bake the more intricate traditional “Lucia” saffron buns).

Enough reminiscencing for one day! Birthday present from my penfriend. (It was set to my date of birth when I received it.) I will never remember to set it right every day, all year round - so I’m thinking of putting it with my Advent things when I pack them up again after New Year… During the month of December I might possibly remember!

Posted by DawnTreader at 17:10