What I listened to in April (Short Reviews) 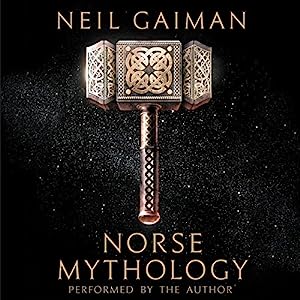 Neil Gaiman has long been inspired by ancient mythology in creating the fantastical realms of his fiction. Now he turns his attention back to the source, presenting a bravura rendition of the great northern tales. In Norse Mythology, Gaiman fashions primeval stories into a novelistic arc that begins with the genesis of the legendary nine worlds; delves into the exploits of the deities, dwarves, and giants; and culminates in Ragnarok, the twilight of the gods and the rebirth of a new time and people. Gaiman stays true to the myths while vividly reincarnating Odin, the highest of the high, wise, daring, and cunning; Thor, Odin's son, incredibly strong yet not the wisest of gods; and Loki, the son of a giant, a trickster and unsurpassable manipulator. From Gaiman's deft and witty prose emerge the gods with their fiercely competitive natures, their susceptibility to being duped and to duping others, and their tendency to let passion ignite their actions, making these long-ago myths breathe pungent life again.

I enjoyed listening to Gaiman's reconstruction of the stories from the old Norse mythology, performed by the author himself. Some of the characters and elements of the story/stories are more or less  familiar to me ever since childhood. I don't really remember how much we were introduced to them in my own school days back in the 1960s. In my memory, my main source of familiarity with them is an old school reader that belonged to my paternal grandfather back in his school years - printed in 1910. I still have that book: 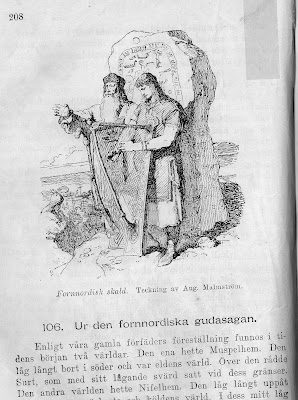 Around ten years ago, I refreshed my memory a bit by reading a modern translation and interpretation of some of the old texts (and their context) by a Scandinavian expert on old runes (Lars Magnar Enoksen, Fornnordisk Mytologi).

I think Gaiman's book is worth reading if you like fantasy, fairy tale and mythology; not least because so many other authors through the centuries have borrowed a lot from these old tales. However, Gaiman pretty much keeps to reviving the stories as such, as readable fantasy for our time, rather than going into analysis. 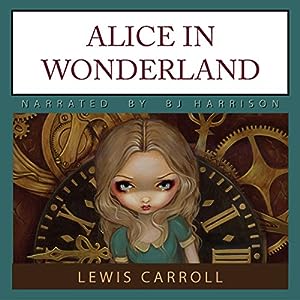 Alice begins her fantastic journey by following an unprecedented White Rabbit with a pocket watch. While in the topsy turvy world of Wonderland, Alice takes advice from a caterpillar and attends a mad tea party. She meets the Mock Turtle and the Gryphon, and participates in a ludicrous courtroom scene. Each character has its own charming voice, as B. J. Harrison delivers one of his most whimsical performances. 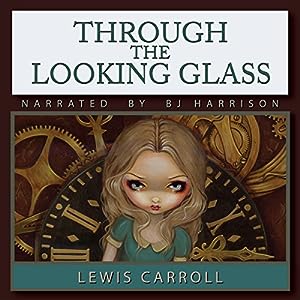 Through the Looking Glass

Alice sees the other side of the Looking Glass, and enters another world of whimsical enchantment. She encounters argumentative chessmen, Jabberwocky monsters, Tweedledum and Tweedledee, and some very insolent flowers. Carroll continues the development of his Wonderland in this second, and many feel richer, adventure of Alice.

I listened to these two Alice books in close connection with also buying the second Alice film with Johnny Depp (Alice Through the Looking Glass). Before I watched that one, I also watched the first Alice in Wonderland film again. If you know the classic books, you should be aware that the first film mixes a lot of elements from both books. And knowing that, you must also be prepared that the second film sort of takes things "even further"...
I'm not sure when I first read Alice in childhood. I only have a very vague memory of reading it, or trying to read it, but at that age (whenever that was) finding it too weird. I don't think I ever had my own copy of it in Swedish, so if I did read it, it was probably borrowed from the library. What I do know is that I did not really begin to appreciate it until I read it in English many years later (well into my twenties, at least). I do suspect that a lot of the wordplay (which is really so very essential in that book) probably gets lost in translation.
My copy of The Complete Illustrated Works of Lewis Carroll is from 1985. I have returned to Alice a few times since then.

I also have to say I like the first Burton/Depp Alice film (2010), even if it makes its own mix of the story. I think I may have to watch the Looking Glass one again to quite make up my mind about that. (But I do think it may be worth while to do so.)

Actually, I think that's probably why I decided to also listen to the originals as audio books in between. (The audios were cheap buys.) Alice is probably best read in print though - again because of all the wordplay that you may want to stop and ponder about. (But also the original illustrations.)
- - - 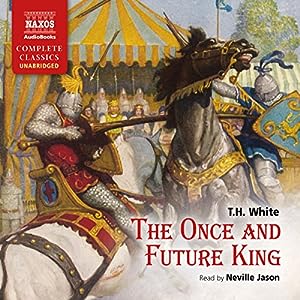 The Once and Future King

The complete "box set" of T. H. White's epic fantasy novel of the Arthurian legend. The novel is made up of five parts: "The Sword in the Stone", "The Witch in the Wood", "The Ill-Made Knight", "The Candle in the Wind", and "The Book of Merlyn".

Merlyn instructs the Wart (Arthur) and his brother, Sir Kay, in the ways of the world. One of them will need it: the king has died, leaving no heir, and a rightful one must be found by pulling a sword from an anvil resting on a stone. In the second and third parts of the novel, Arthur has become king and the kingdom is threatened from the north. In the final two books, the ageing king faces his greatest challenge, when his own son threatens to overthrow him. In "The Book of Merlyn", Arthur's tutor Merlyn reappears and teaches him that, even in the face of apparent ruin, there is hope.

What the Critics Say

"For those who have never read these five books, prepare to be surprised by their adultness, their laugh-out-loud humor and tongue-in-cheek commentary on modern life; for those who know them well, prepare to be delighted with Neville Jason's transcendent reading. The lovely timbre of his narrative voice, his rhythmic, easy pacing and host of individual characterizations transport listeners into White's weird and wonderful otherworld as quickly as Alice slipped through the looking glass. This long production is so entrancing that one wishes it would never end." (AudioFile)

I have not read this series before. (The books were originally published between 1938 and 1977). I did buy them (or the first four) condensed in a paperback some years ago (before Kindle), but as the print is very small, and as my eyesight began to deteriorate in that respect, I never got round to reading it. So took my chance when I found it on audio book sale now. Neville Jason's narration is good, and just as the "critics" review above says, I was also rather surprised at (and amused by) the author's tounge-in-cheek humour in many passages - like, every now and then sort of stepping out of time-period he's writing about, and comparing it to later periods in history, which might be more familiar to his readers. He also puts a different focus and twist on the love story between Lancelot and Guinevere than I recall from other versions of the Arthurian tales that I have read.

However, I think I still feel that among the Arthurian books I read/listened to recently, The Mists of Avalon made even more of an impression. But even though they both go into depth with the story, they are rather different in style from each other.

The first version of the Arthurian tales to enthrall me in the past, by the way, was Mary Stewart's Merlin trilogy from the 1970s: The Crystal Cave (1970), The Hollow Hills (1973) and The Last Enchantment (1979). I read the first two back in my upper teens, probably in Swedish translation the first time. (My English paperback copy of the Crystal Cave was printed in 1977.) I have reread those more than once over the years.

Posted by DawnTreader at 12:52