Sliding Back in Time

Time is a Mystery. Sometimes the past and the present seem to weave seamlessly in and out of one another, separate and inseparable at the same time. Yesterday was my Mum’s birthday, so I was thinking of her. “Hard to believe” (as one often says) that nearly nine years have gone by since she died. Although sometimes that day too seems like yesterday or a long long time ago, all in one.

Anyway – with part of my brain thinking of mum, and another part observing the snowy weather outdoors, my Master Mind connected the two and reminded me of an old photo in one of my childhood photo albums. Probably from January or February 1961. 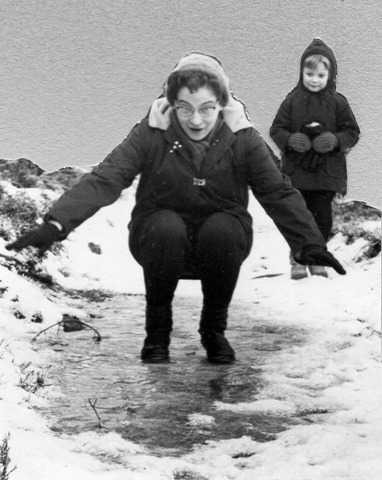 I wonder if when and where we were born affect how we feel about the seasons of the year? My mum was born in February and far up in the North (but only lived the first year of her life up there); and I think she always liked winter a lot better than I ever did. I was born in late August, and I think early autumn has probably always been my favourite time of year. At least I know for sure that I’ve never been a huge fan of winter, and neither at age five nor at any point later in life would I ever voluntarily have gone sliding on ice like mum does here. (Yes, that’s me behind her – looking very sceptical.) 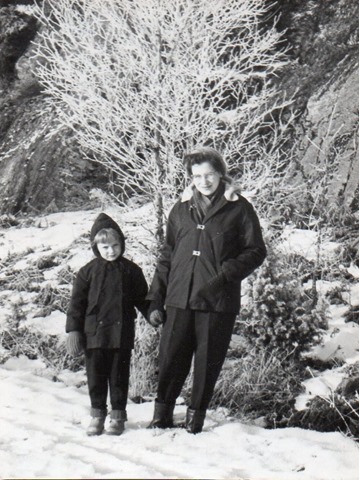 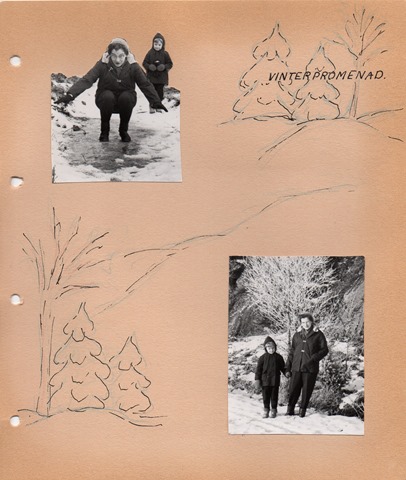 The whole scanned “winter walk” page from my album; with illustrations by my mum.

Posted by DawnTreader at 12:16