For this post I’m choosing some multi-view cards recieved over the past six months. (I don’t think I’ve posted any of them here before. And if I have… Well, never mind!) Another thing they have in common is that they show places with a lot of history. 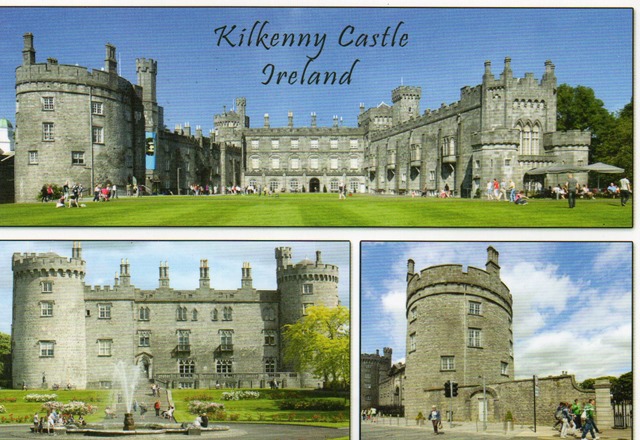 “Construction of Kilkenny Castle began in 1192 by William Marshall, the son in law of Strongbow who led the Norman invasion of Ireland in 1170. It was completed 21 years later.” It was owned by one powerful family from 1391 until 1935. After that, “the condition of the castle deteriorated and it was sold to the people of Kilkenny in 1967 for the pricely sum of £50. Since then, major restoration works have been carried out on both the castle and gardens, both of which are now open to the public 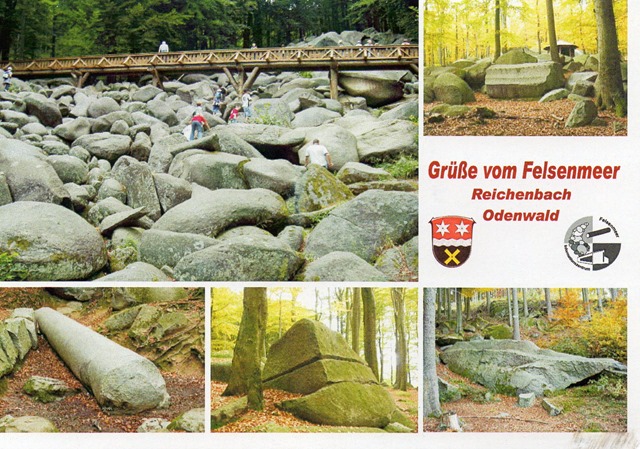 Felsenmeer = Sea of Rocks. This area is said to have been formed about 340 million years ago. During that time, two ancient continents collided and the ancient Odenwald was situated directly in the collision zone. --- The rocks which got a rounded shape were exposed during the ice ages (2.5 to 10.000 years ago) and, as a result of frost and thaw and soil creeping, were transported down to the valley. During the 3rd and 4th century the Romans used the "Felsenmeer" as quarry. Burgen am Rhein – Castles on the Rhein
Postcrossing card from Germany, June 2018 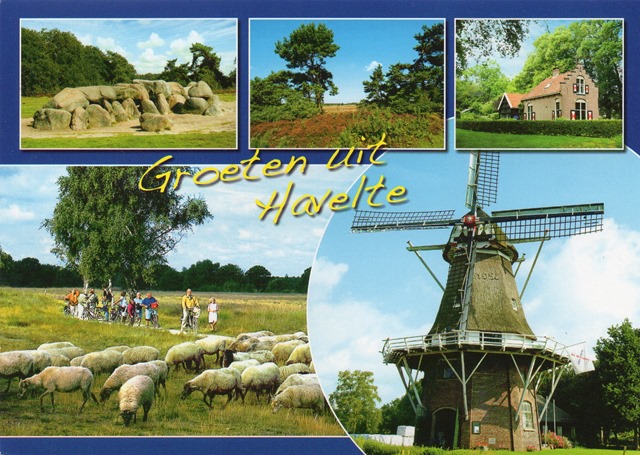 Groeten uit Havelte - Greetings from Havelte
from Jarina in the NL, June 2018

Havelte is a village in the province of Drenthe in the north-eastern Netherlands. Drenthe has been populated since pre-history, and the most tangible evidence of this are the dolmens (megalithic tombs) built around 3500 BC (upper left image). 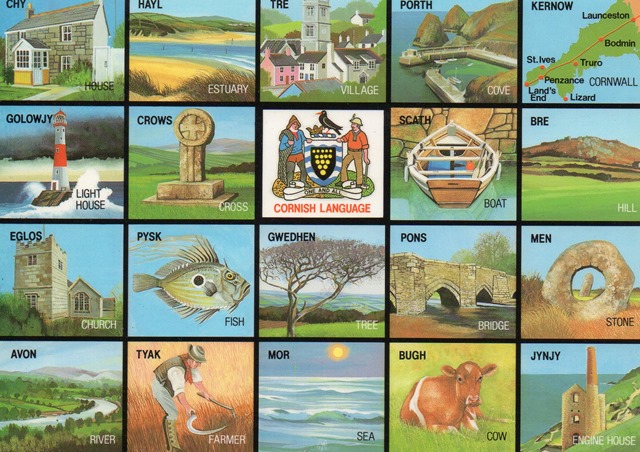 This was fun, it reminded me of visiting Cornwall on a family holiday trip way back in the early 1970s – and I still have a little brochure I bought then, “A Mini-Guide to Cornish”. Truly “mini” - only 15 pages, and most of the words relate to place-names + a few common phrases.

“Cornish is not easy for the Englishman to learn for several reasons. The tongue from which English is derived, as well as most other languages of Europe, is Aryan. From another branch of the Aryan mother-tongue sprang all the Celtic languages – the Gaelic of Scotland and Ireland, Manx, Welsh* and Breton and Cornish. The interesting fact about all these latter is that […] their sentence construction is not Aryan. It has been suggested that the reason for this is that the Celts, when settling in Cornwall, Ireland and so on, superimposed their Celtic vocabulary upon the method of sentence construction of earlier peoples already living in those areas. […] Cornish, then, for the non-Celt, is difficult to learn and difficult to pronounce.” (Quote from the introduction to the Mini-Guide to Cornish)

(*Having tried a little Welsh via Duolingo, I can only agree… It is very different from other European languages. I don’t think I’ll ever be able to pick up more than a few phrases and words. The basic grammar remains a mystery to me.)

Posted by DawnTreader at 22:10