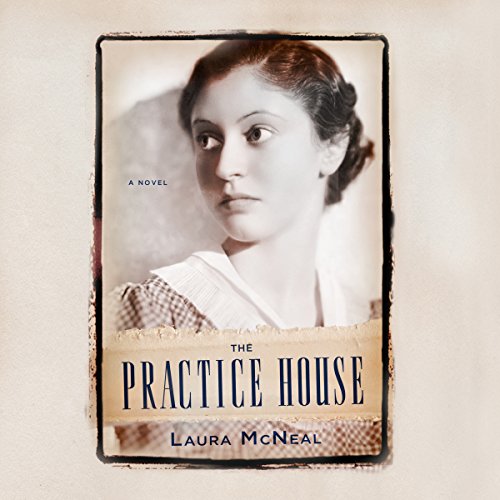 The Practice House by Laura McNeal

The story starts in Scotland in 1929. Aldine and her sister are living with their aunt, when one day they get a visit from two American Mormon missionaries. Aldine’s sister is converted and marries one of the two missionaries and moves with him to America. Aldine moves with them too, and lives with them in New York for a while; but then decides to seek employment as a school teacher in the countryside – and ends up in a small and poor community in Kansas, far away from everyone and everything she knows.

Kansas is suffering from severe and long-lasting drought. A lot of families already moved away, and those who are still left can’t really afford to keep the school going. But one man, Ansel Price, optimistically decided to put in an ad for a teacher anyway; and when Aldine turns up, he does not have the heart or courage to turn her away. She ends up lodging with Ansel and his wife, and their teenage son and young daughter – and teaching the few children still left in the community, without getting any proper salary for her work. Her presence in the household causes tension in the family – the only relationship that does not get complicated is between Aldine and the young daughter. Ansel’s wife is not at all happy about having another grown-up young woman in the household; and besides, she has her own dreams set on the family moving away from dusty and barren Kansas to California (while her husband finds it hard to leave the farm, in spite of all their recent difficulties and misfortunes). Another bad dust storm sweeping in over Kansas changes life for all of them…

I found the story “uneven” – some parts good, others too drawn-out, but also some unexpected twists and turns, and some things kind of left dangling (even if certain attempts are made at the end to tie some loose threads together). From what I read beforehand, I had expected the story to be more about life in a Mormon community back in those days. But it turned out to be very little about that; and instead the main part of the book is about life on the farm in Kansas (and that was not a Mormon family). And then there is yet another surprising shift of perspective (and location) towards the end…

The unexpected shifts of focus make me wonder if perhaps it’s based on a true family history. That might explain a few things, as real life is rarely as “neat” as we tend to want it to be in fiction. But there is nothing in the book to confirm that, so I’m not sure.  I don’t doubt that the author put quite a lot of effort into historical research about the time period and living conditions etc. (I can still kind of taste the sand in my mouth, from just reading about those Kansas dust storms!) What confuses me is the unevenness in the main storyline, and that some characters kind of get left behind along the way.

I might add that I bought the Kindle book + Audio narration on a special offer (less than $4 together), and appreciated being able to shift between reading and listening.

Posted by DawnTreader at 21:04