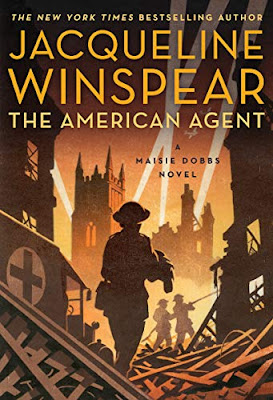 The American Agent
by Jacqueline Winspear (2019)

The 15th installment in Jacqueline Winspear's series about private investigator Maisie Dobbs. In this novel Maisie investigates the murder of an American war correspondent in London during the Blitz. She is asked by police authorities to work on the case together with Mark Scott, an agent from the US Department of Justice whom she previously met in connection with a case in 1938 which took her to Munich in Germany. Nowadays, Maise also has to balance her professional life with her responsibilities for a young evacuee that she has come to love and care for, and wants to adopt.

As usual, my impression is that Winspear does a good job with reflecting the wartime atmosphere that she's writing about. (In the early books, post-WWI - in the later books, WWII.) 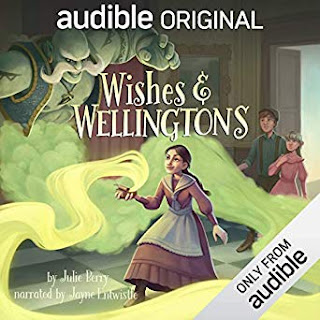 
Wishes and Wellingtons is an Audible original--i.e. only produced as an audio book.
There is no print version. As Audible member this was one of my monthly free 'extras' recently.


This is a middle-grade fantasy adventure. Maeve Merritt is a student at  the London boarding school Miss Salamanca's Boarding School for Upright Young Ladies, and not at all happy about that. One day, as punishment for something, she is forced to sort through the trash, and finds a sardine tin that turns out to contain a foul-tempered djinni - who in turn is not at all happy to find his new "master" to be a mere schoolgirl...

A strange mix of adventures and troubles follows for Maeve, her room mate at the school + and an orphan boy from the orphanage next door, before the story comes to a close. A kind of mix of Charles Dickens and Arabian Nights; with a rather headstrong girl as the main character. I liked the audio narration, but have to say I was less impressed with the plot. But then I suppose I'm not really in the target age group (even if I do still like to read children's and YA books sometimes). 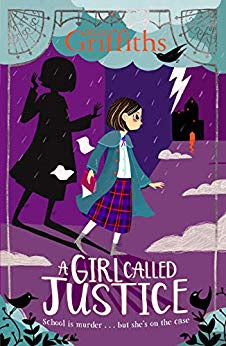 
I was curious to read this because I like Elly Griffiths crime novel series about the forensic archaeologist Ruth Galloway (11 books so far, I think). I also liked her recent stand-alone novel The Stranger Diaries.

This time, she is trying her hand at a book for younger readers, and lovers of for example the Enid Blyton mysteries.

While I remember the children in Enid Blyton's stories as always being on holiday, this is another book set in boarding school environment. Not quite as grim as Miss Salamanca's Boarding School for Upright Young Ladies (see Wishes and Wellingtons above!), and missing the magic of Hogwarts - but still reminding a little bit of both...

But then the heroine, Justice Jones, is kind of set on finding mysteries to solve right from the start when she arrives at
Highbury House Boarding School for the Daughters of Gentlefolk. The story is set in 1936.

Her father, a widower, is a barrister specialising in murder trials, and Justice is sent off to boarding school after her mum died.  Before that, she had been home-schooled by her mum; so coming to live at a boarding school is quite a shock. And when one of the first things she hears about is the suspicious death of chamber maid, Justice at once takes it upon herself to make her own investigations into the mystery. Along the way, she also makes some new friends. But when a winter storm cuts the school off from the rest of the world, the plot thickens...

In an  afterword, Elly Griffiths writes that the school is entirely fictional, but "It is, however, loosely based on ... the school attended by my mother, Sheila, in the 1930s. Like Justice, Sheila was brought up by her father ... and she too heartily disliked boarding school."

For my own part, I prefer the author's adult books; but back in my Enid Blyton days of youth, I would probably have loved this one.

Speaking of boarding schools, I'm also currently in the process of spending my monthly Audible credits on collecting the Harry Potter series in Swedish narration by actor Björn Kjellman.
When I first started reading/listening to Harry Potter, back around 2000, it was in narration by another Swedish actor, and recorded on cassette tapes. (Anyone remember cassette tapes?!)

Since then, I have also read and listened to them all in English (several times); read by both Jim Dine, and Stephen Fry (my favourite). But it's also nice to keep up with the Swedish translations.

(For some reason, I never seem to outgrow the Potter books. I think it is because they're so full of details, and with so many hidden or half-hidden references to all kinds of other stories that there's always something new to discover.)

Posted by DawnTreader at 20:34