The Sepia Saturday prompt for this week (see photo at the bottom of this post) reminded me that maybe I should I try to relaunch a family history project that I got started on years ago - on a separate blog, Greetings from the Past. Among all the papers and photos I found in my parents' house after they died (2009/2011) there was an album of postcards collected by my great-uncle Gustaf - an older half-brother of my grandmother's. (He was born in 1878 and died before I was born.) The earliest postcards are from around 1901. In 1901/02 (while my grandmother was still a baby) he and one of his sisters both emigrated to different locations in the United States - but both later moved back to Sweden again. I also have quite a lot of old photos, but unfortunately with very few names or dates attached. So whenever I start looking into something, I usually end up going "astray" - and not always finding my way back!!

Ah well. While thinking about if, when and how to relaunch that other blog, I'll just pick a couple of ship-related cards for this week's Sepia Saturday here... 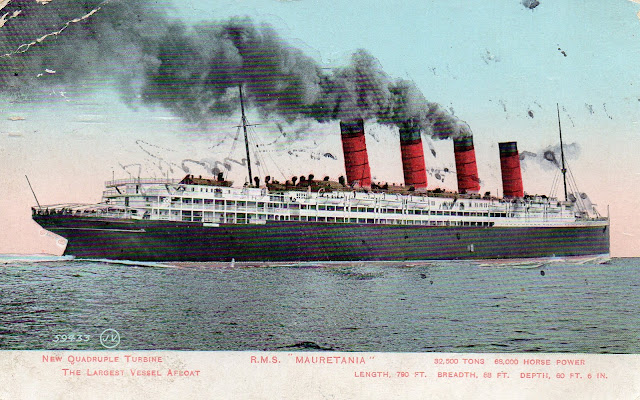 
-----
RMS Mauretania was an ocean liner designed by Leonard Peskett and built by Wigham Richardson and Swan Hunter for the British Cunard Line, launched on the afternoon of 20 September 1906. She was the world's largest ship until the completion of RMS Olympic in 1911. /Wikipedia/
-----

The card was written May 19, 1908 and addressed to Mr Gust Ekman, Galeton Pa, USA. The stamp has been removed from the card (like on all the other cards in the album) but there is an extra postmark to confirm that it arrived in Galeton on May 28.

The text on the back is written in pencil, in Swedish.

Translation:
Aboard the Mauretania, 19 May 1908, at 10 p.m. (Pa time 5 o'clock in the morning) Hello Gust. We are now at Ireland. The Irish are just getting off now. We have had very nice weather every day, so it has been rather nice on the sea. - G. Swanson

The sender also adds an address in Sweden. All put together, I draw the conclusion that G. Swanson was another Swedish emigrant, (probably born Svensson but having changed his name to sound more American), now returning to the old country. And most likely, someone Gustaf got to know in Pennsylvania.

Gustaf himself returned to Sweden in 1911, if memory serves me right. In the US population census of 1910, he is registered as a "yardman" at a sawmill in Galeton, and together with some fellow workers a boarder to the township’s tax collector, a Mr Near and family. (See what I mean about getting sidetracked as soon as I start looking into something??) 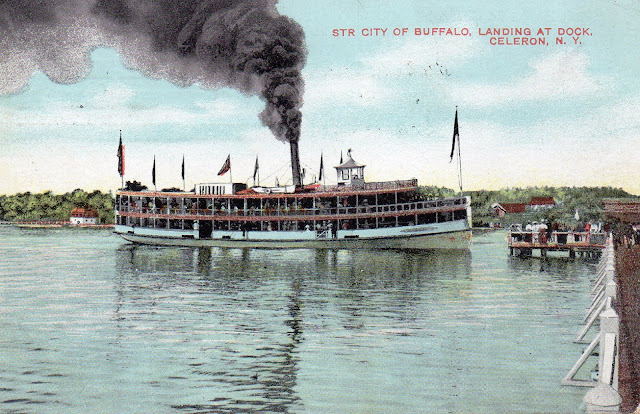 "American Steamship Company (“ASC”) has been a pioneer in Great Lakes vessel transportation. Founded in Buffalo, New York in 1907" - http://www.americansteamship.com/

This card too is addressed to Gust Ekman in Galeton Pa, and was sent from Jamestown N.Y. July 18, (19)09. It is written in English.

I will send you [illegible word] and thanks you very much for the postal you sent me. I hear you had good times on 4 of July in Buffalo. Did you have any girls wheel whed* you. all [?] Gust. I had lovely times out here in Jamestown to. Alfred and Henning is working here in town now so pretty soon all de boys from Galeton will be here in Jamestown. I supoese Hilding have a picnic now wheel whed* all de girls. Good Bye and soon (?)
John Beckman, Broadhead Ave, Jamestown, N.Y.


* Looking at the handwriting again, it's probably says "whed" rather than "wheel". Makes more sense as a misspelling of "with"... Compare how he also writes "de" instead of "the". 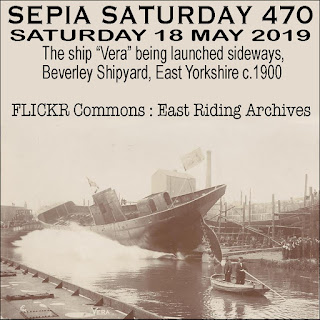 Posted by DawnTreader at 22:49