The Mapping of Love and Death (Book Review) 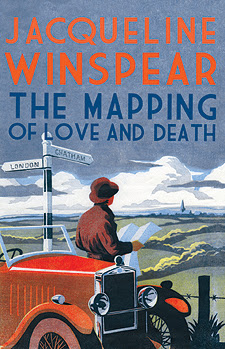 The Mapping of Love and Death by Jacqueline Winspear (2010) is the 7th book in her series about private investigator Maisie Dobbs, set in London between the two great World Wars.

The main character Maisie began her working life at the age of thirteen as a servant, and later came to serve as a nurse in the first World War. Years later, in 1929, having apprenticed to Dr Maurice Blanche, revered for his work with Scotland Yard, Maisie sets up her own business as a private investigator. Her assistant Billy Beale has working class background and served as a soldier in the war. Maisie’s former employers Lady Rowan and Lord Julian Compton are her supporters and sponsors of her education and provide the link to the upper class society.

I read the first book in 2006, and on average I’ve been reading about one per year since then - while the author has also continued to publish one per year, which means I am still a few books behind!

While the books are well written, and I assume a lot of research has gone into background details, I find them a bit… gloomy, and slow-paced… with more focus on thinking than on action. As the series continues there is quite a lot of repetition of background (for the benefit of those who did not read all the previous books). The War keeps hovering in the background, and Maise as a literary character still also seems to be keeping a certain emotional distance - even from the reader. At the same time I find the period of time interesting and from that aspect I find the books adding to the general picture.

As with any book which is part of a series with an ongoing background story, I find it hard to give a detailed review, as it may reveal too much to readers who have not read the others.

The short intro to The Mapping of Love and Death on the author’s website reads:

The “mapping” in the title refers to the fact that the soldier in question was a cartographer; which means there are quite a few references to cartography and its use in the first world war. This, in itself, I found interesting (learning a little bit about something I never really thought about before).

Weighing in both main plot and background story… I think I’ll stop at 3 stars. (Maybe 3½…)