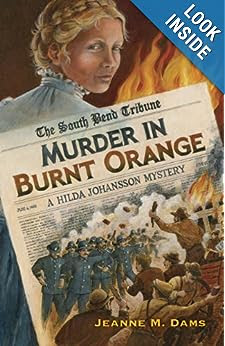 Several months ago, someone suggested that I might want to read the Hilda Johansson mysteries by Jeanne M. Dams. I’m not sure whether that was in a comment on this blog or on my Greetings from the Past blog, where I have been writing quite a lot about my great-aunt Gerda, who emigrated to America in 1902 to work as a maid in various households in Chicago for about ten years (and later on as companion for rich English ladies travelling both in Europe and other countries).

Hilda Johansson, the heroine in a series of mystery novels by J.M. Dams, is also a Swedish immigrant working as a housemaid, not in Chicago but in South Bend, Indiana, in the early years of the 20th century.

I had never heard of neither the author nor her books before, but found one of the novels available cheap for Kindle ($2.99), so I decided to give it a go. It must be  at least the 7th book in the series, but the previous ones seem not to be available for Kindle at all.

In Murder in Burnt Orange, Hilda is no longer working as a housemaid, and has also changed her surname, since she is recently married. She is also pregnant with her first child. There are several reminders of Hilda’s background throughout the book though, so not difficult to read it as a stand-alone novel.

The general set-up reminds me quite a bit of the Maise Dobbs novels by Jacqueline Winspear (of which I have reviewed two or three before on this blog) – even if Hilda, unlike Maisie, has not made a professional career of her detecting skills.

All in all I quite enjoyed making Hilda’s acquaintance and was impressed with the auhtor’s use of historical background. The novel is set in 1905, and inspired partly by some real historical events, like labor unrest (in Chicago), strikes and train wrecks.

Here’s the blurb copied from Amazon:

It's a heat wave in more ways than one in the summer of 1905, as strikes, arson, and train wrecks threaten the fabric of civilized society in South Bend, Indiana. In the tumultuous first years of the twentieth century, anarchy seems to rule, with the assassination of an American president and labor unrest like the Anthracite Coal Strike bringing misery to millions. How can a Swedish immigrant like Hilda Johanssson, formerly a housemaid and now pregnant with her first child, possibly affect these conditions? Making deductions worthy of Sherlock Holmes - and using her own "Baker Street Irregulars” - Hilda reognizes a pattern to the disturbing events. No one thinks she'll actually be able to solve matters, especially since custom forbids her even leaving the house. But they reckon without Hilda's quick mind and stubborn determination to see the job through - even when the crime wave turns into murder, and touches her nearest and dearest.