I’m beginning to wonder if according to some ancient calendar the year 2016 is perhaps the Year of Dragons? Anyway I seem to have stirred a few of them during this month of January!

The first week after New Year, I (re)watched (on DVD) the three movies based on Tolkien’s The Hobbit.

I copied this image from Google search but it is the same cover as on my own paperback copy from the mid 1970s sitting in my bookcase.

I also (re)watched the last of the Harry Potter films, where there’s a dragon playing a part too.

A week ago I received this postcard from South Africa – with photos from Drakensberg = Dragon Mountains. Yesterday, on the charming blog The Postal Adventures of Morris Mouse there was an interesting new blog-postcard throwing light on the world-wide phenomenon of dragons and ... let’s say, creatures of related kind.

And today, further evidence of dragon activity reached me by mail, in the form of a Postcrossing card from Russia: 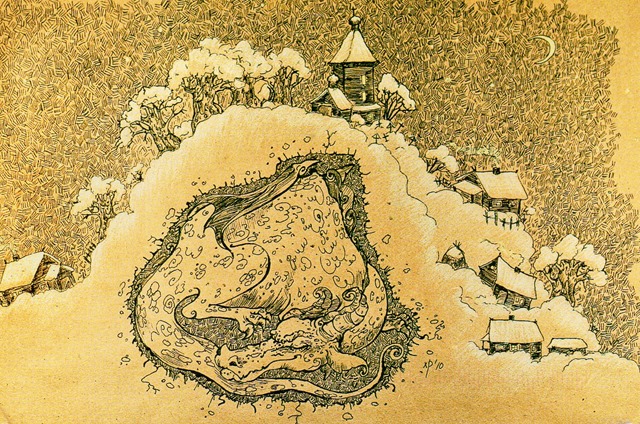 "Here be dragons" means dangerous or unexplored territories, in imitation of a supposed medieval practice of putting dragons, sea serpents and other mythological creatures in uncharted areas of maps. [Wikipedia]

Posted by DawnTreader at 20:51