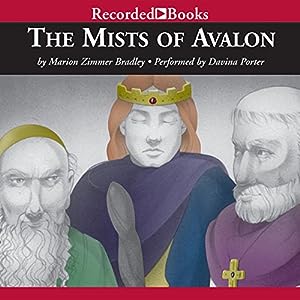 Marion Zimmer Bradley’s The Mists of Avalon was first published in 1983, but I never read it before. Now I listened to it as audio book, excellently narrated by Davina Porter. Even though it’s a very long book – lasting nearly 51 hours – I was kept under a spell all the way.

The novel has been called a feminist take on the Arthurian legend; telling the events predominantly from the point of view of Morgaine, Arthur’s half-sister, who is more often (in other versions of the legend) portrayed as an evil sorceress (Morgan le Fay). We also get the perspectives of other female characters, like Morgaine’s mother and aunts, and Arthur’s wife Gwenhwyfar; while all the men sort of remain in the background for a change.

However, the book is not only about the male vs female lookout on life; but also a great deal about the clashes between the old religion (represented by Avalon) and the new (Christianity).

The ruler of the mystic realm of Avalon, also known as the Lady of the Lake, is the High Priestess of the old (Brittonic) religion. For the major part of the story, this position is held by Morgaine’s aunt Viviane – while Igraine, Morgaine’s mother, spends her last years in a Christian convent. Morgaine herself continues to cling to her bond with Avalon; even though with time, that ancient island seems to be drifting further and further into the mists (and getting harder and harder to find one’s way to, even for believers).

King Arthur’s wife Gwenhwyfar on the other hand is a firm believer in the new religion (Christianity); while certain other characters, including Arthur himself and (the) Merlin*, act as sort of go-betweens, looking for compromises. (For better or for worse will be up to each reader to decide for him/herself, I think!)

*Merlin in this book is not a personal name but rather the Merlin; indicating an ancient druid title in Avalon.

All in all I found the novel giving “food for thought” for our own turbulent times as well.