… with my computer, and the Windows 10 updates…

*Bella, my laptop, is still “alive” and keeps trying to download and install the tiresome updates; but for some reason she has not yet been successful with the last “Cumulative Update for Windows 10 Version 1607 for x64-based Systems (KB4015217)” this weekend.

And as far as I can understand, Windows does not even give one the choice to do it manually any more, even when one feels that might be better.

Automatic updates may sound good in theory – implying that “you’ll hardly notice it being done”… Bah! The thing is, when it doesn’t work out smoothly, what actually happens is that one ends up thinking about nothing else, and getting nothing else done either! The computer’s eternal searching and downloading and failing to install slows everything else down too. And after a certain amount of trying and failing, poor Bella sometimes gets overheated now and just gives up and shuts down… (I can’t say I really blame her! I tend to do the same myself…)

Checking up on when I bought it, I find that it’s actually 7 whole years that we’ve been together now. That’s a long time for a laptop. She probably deserves to retire!

So I’ve started looking into finding a replacement… But there’s sooo much to think about, and I’m not really all that good at all the technical details and terminology. Basically I still want one rather similar, but perkier and not full of 7 years of cumulative update clutter… 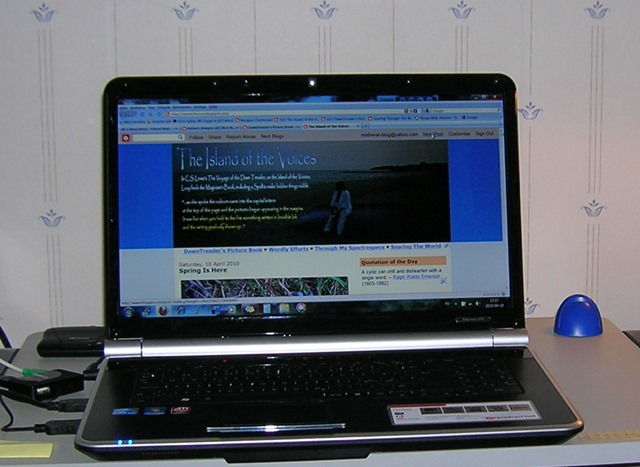 Young Bella back in April 2010.
(She still looks much the same, really.)

*(Named ‘Bella’ by me because it’s a Packard Bell.)

Posted by DawnTreader at 20:57