From Spring in my Step to Sudden Fall

Last Friday (19th May) was a lovely warm spring-on-the-verge-of-summer day here. In the morning, I took a bus across town with the purpose of buying a new camera. Mission accomplished – details another time...

After I had made my purchase, because it was such a nice day, I decided to go for a bit of an extra walk  As it turned out, not one of my best ideas. There were some nice views along the way (which will appear in another post), but then... 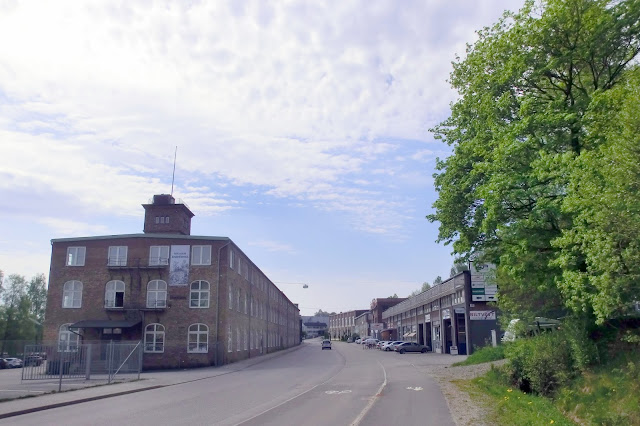 Photo taken with my old camera.

Walking along this street through an industrial area, I had my eyes (please note: not the camera!) focused on a car that was about to back out from the parking space in front of a shop. I wanted to make sure the driver was aware of me before I passed. He did see me; our eyes met in his rear mirror. But then - as he put it afterwards - I just suddenly vanished from his view and was nowhere to be seen! (Like Alice down the rabbit-hole…)

The driver and his partner both got out of the car to check what on earth had happened. And found me on the ground, trying to sort out the same, and if I had broken anything… After a little while, I decided I probably hadn’t; so let them help me get back up on my feet. Rather miraculously, I seemed neither to have broken nor seriously twisted anything.

I'm pretty sure that what happened was that while looking at the car, I stumbled on the kerb of cobble stones separating the walk path from the bicycle path. (You can see it in the photo.) I remember doing a little "dance" trying to regain my balance. But alas...

Meanwhile, a shop assistant inside had also seen us and came out and offered us to come in. The most obvious injury was that I was bleeding through my jacket from a wound on my arm (close to my elbow), which also looked rather nasty when I removed my jacket. 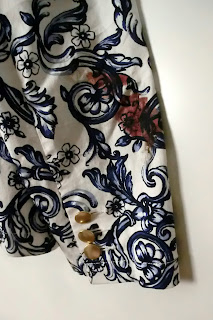 The girl in the shop had a first aid kit though, and did a good job of basic cleaning of the wound and providing a temporary dressing while we talked the situation over. We agreed I had probably better also have that wound professionally seen to. So the couple with the car offered me a lift to my health care centre – which I gratefully accepted.

Unfortunately, I arrived during the lunch hour, and I had to wait a while. (However, an old friend of mine was manning the reception desk, and got me a cup of tea while I waited. A little bit beyond normal service...) As soon as the lunch hour was over, I got to see a nurse who gave me a proper dressing of the wound. I had some scrape wounds on my hands too but they only needed ordinary sticking-plasters.

I got myself back home by bus okay. Had to wait a while for the bus too, but it was still a nice and sunny day, the HCC is in the city centre and I bought myself an ice-cream and found a bench to sit on. (Could have called for a taxi if I had felt I needed it.)

When I got home I discovered that I also had scrape wounds and bruises on my right hip, leg and knee, even though (mysteriously!) there was no damage to my jeans. The scrape wounds were just superficial. (Obviously the trousers had been good protection!) The bruises of course behaved as bruises do and got worse over the weekend before beginning to fade… But on the whole I feel very lucky, as I could so easily have been much worse injured.

I took most of the fall on my right side, which is my bad shoulder/arm since before. So yes, pain did catch up with me before the next morning (also triggering the old chronic pain a bit). I’ve not been able to lie/sleep on my right side all week, and it’s still hard to write and so on. Neck/shoulder a bit stiff too, but getting better. Was back at the HCC yesterday and got my elbow bandage changed. Will have yet another checkup of the wound on Monday. But it's healing.

It may be a while yet before I’m back to “normal” presence in the blog world and correspondence, though. But now you know why... 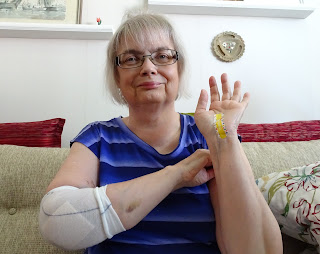 PS. List of worldly items that also were not broken in the fall:

Nor anything else in my handbag or backpack.

The dark blue trousers I wore bear no traces whatsoever of an accident, even though my hip, thigh and knee underneath still do.

The jacket has been washed, and the only damage is a small tear in the sleeve that can be mended (when I have mended myself!)

Posted by DawnTreader at 12:56