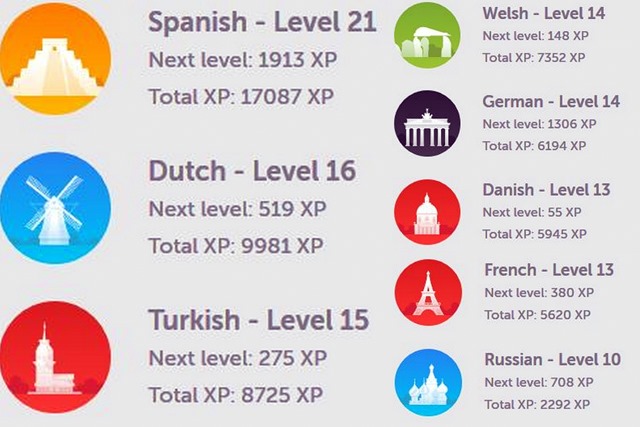 It’s been a while (5 months) since my last Duolingo report. I like to make note of my progess here on the blog every now and then, as the Duo app does not show the history with each language (only where I am right now).

In Spanish, which I started learning (“from scratch”) in May 2016, I’m currently rated by Duo as 48% fluent. They made some changes in the Spanish course over summer, which means I’m getting more of a feeling of moving on there now (rather than just repeating the same old exercises over and over). I also recently read a few chapters of a free e-book without access to any English or Swedish translation. I decided not to finish it, but not because I found the language too difficult, but because I did not really like the characters and story. Meanwhile, I picked up a tip from a comment on someone’s blog recently about a Spanish TV-series on Netflix – Velvet: (“In 1950s Spain, the heir to a fashion house romances a beautiful seamstress who works for the company, despite the objections of his family.”) Luckily it comes with Swedish subtitles… Yikes, Spanish is a fast-flowing language!! (My brain’s deciphering of stray words and phrases always seems to come several sentences behind!) I see there are four seasons of this series though, so that may give me some practise in listening… ; ) (Watched three episodes so far.)

A Turkish TV series also made a come-back on Swedish television after summer: Paramparça (English title: Broken Pieces). I only recognize stray words and phrases – but perhaps (I like to think) a few more than a year ago (first season).

With Dutch and Welsh, Duo also recently added more exercises, which  I’m working my way through. With Dutch, understanding the written language is not too difficult, but spelling, listening and pronouncing it is a different matter… And with Welsh, it’s that and just about everything else… (Possibly I’ve got a teeny tiny bit better at pronouncing it. But as I’m the only one listening to me, who knows!)

I also recently added Russian to the list, curious to see how I’d cope with a different alphabet. So far, I have to confess I’m finding it very much a guessing game. Very difficult to relate the spoken words to the spelling; and the other way round… If I were setting my goals high, I’d be very frustrated. I’m not, though! (Knowing I can quit any time I like and I’ll still know more than I did before.) However, I think it will probably be a while before I try yet another alphabet.

[German and French: Just reviewing. In reality, my German is a lot more solid than my Spanish - and my French probably at least better than my Turkish!]

Posted by DawnTreader at 21:37