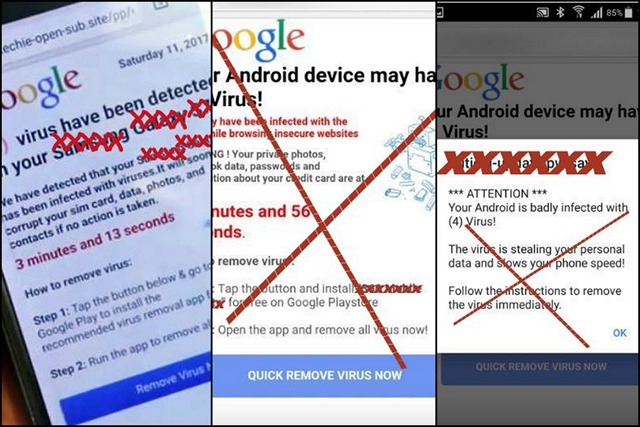 If a "Google" message turns up on your mobile/cellphone screen saying that your phone is getting infected by viruses and you have only five minutes to stop it from completely locking your phone and stealing all your info (with a clock ticking dramatically in the background) - don't panic. It's a fake message. (Do NOT click on the "remove virus" link.)

I got one like this a few days ago. And of course it had to happen late at night, when I was just about to turn off the phone and go to sleep… I did somehow feel that it was probably just a hoax – but the countdown really is very stressful. My Scarlet O’Hara-style* response was to just shut the phone off completely; because whether fake or real, I'd probably be better able to deal with the consequences in the daytime!

*(“I’ll think about that tomorrow.” Famous quote from Gone With the Wind.)

The next morning, I did some research from my laptop, and found support for the suspicion that it was a fake message. If there is a virus involved at all, that would be in the app that they tell you  to download. However, if you do nothing, and just let the clock run down to 0:00 – NOTHING happens. (Some brave tech guy put that to the test in a YouTube video.)

So I had zero problems opening my phone again, and it was working just fine. Without downloading any extra cleaning software, I manually cleared cache memory in the browsers I use on it + Facebook (not being sure from which browser that page had turned up for me – but I think it did happen via Facebook). I thought that should have cleared the history, but today I found the web page was still there in the memory of my Chrome browser. Now I have also separately cleared the browser history (synced with other devices) and hope I’m rid of it. Phew. Even when virus warnings are fake, they still do steal a lot of time!

However – trying to find a bright side – I did manage free up some memory space on the phone in the process… (No virus, just accumulated “stuff”).

The image collage made by me, using screenshots I found in my “research”. (Some details crossed out by me.) I think what makes one panic the most, besides the countdown, is that they seem to be able to correctly identify what type of phone you’re on. On the warning that came up for me, it did not just say “Android device” but the exact type of phone that I have. Which does make one think at first that the pop-up message really comes from some built-in security within the device.