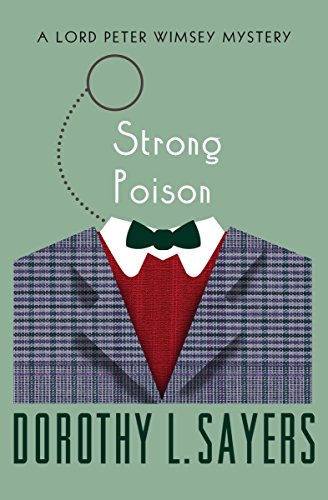 The first book I read (or finished reading) in 2018 was Strong Poison, a Lord Peter Wimsey mystery by Dorothy L. Sayers; first published in 1931.

I’ve read it before; more than once, but probably in Swedish. I bought the whole Wimsey series for Kindle some years ago (reduced price at the time) (and got rid of a few falling-apart old paperbacks from my bookshelves). I (re)read the first (Whose Body) and the second (Clouds of Witness) in 2016-17; but now felt like skipping ahead a few to Strong Poison, which is where Peter first makes the acquaintance of Harriet Vane – a crime novelist herself, and now accused of the murder of her ex-lover, another writer. Lord Peter does not believe she is guilty, and gives it his best effort to find out and prove what really happened. It’s clear from the beginning that the victim died of poison; the question is how. Did he take his own life? or was he killed by someone else? This book is a good example of a classic murder mystery, with focus on who, when and how. Having read the book before, I pretty much knew how it ends; but the quality of this novel is to be found in all the intricate details of the mystery (some of which I had forgotten), and also in witty dialogue and repartee, and the growing relationship between Peter and Harriet – the knight in shining armour vs the damsel in distress. While Peter unexpectedly finds himself falling head over heels in love, Harriet feels trapped – not just physically (in custody awaiting trial, and unable to do anything about the situation herself), but also psychologically – having to depend on Peter to literally rescue her from the gallows, while all she is really longing for is to be free and independent again.

I really enjoyed rereading this one.

“Curious,” mused Wimsey , as he pattered along Bedford Row  “everybody is so remarkably helpful about this case. They cheerfully answer questions which one has no right to ask and burst into explanations in the most unnecessary manner.”

“Next to hidden treasure and mysterious documents , nothing is more full of sensational suggestion than a packet of anonymous white powder.”

Posted by DawnTreader at 19:17