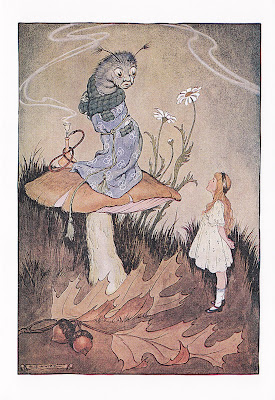 My own adventures in Wonderland, continued.


Monday (last week): Waited for doc to call (as previously agreed). He did not.

Tuesday: After a lot of button-pressing and waiting I got in touch with a nurse – who sighed and let me understand this was not the first time she'd had to sort out missed phone calls and messed-up bookings for this dr.  She said she'd have him call me back ”before lunch”.

Apparently doctors don't have lunch until late in the afternoon (or perhaps not at all); but eventually he did call, and even sort of apologized (even if he obviously wanted to blame most of it on the computer system). Followed by another rather confusing conversation, not really making me feel much wiser. (Cf. Alice above.)

Thursday: Walk in wet weather to ECG & BP appointment with nurse. BP even higher than last time. ”I'm not surprised”, I said (having felt very stressed over the past week). Nurse said to go and sit in the waiting room again; and the doc would see me in a bit. 'A bit' turned into an hour or so, watching staff running to and fro. Caught sight of the same nurse again, and asked How long...? She: ”Has he still not come??” … and went off in search of him (again). Finally he turned up. In spite of eye contact this time (our previous encounters have just been voice calls over the phone), still a lot of confusion. For one thing, he seemed to assume I was already further along in the ”plan” (gradual change of medication) than I was; while I argued that if I was supposed to be, that had not been made clear to me. A rather heated discussion followed. (In my own head afterwards, images of duels in the Harry Potter films turned up...) On the one hand, I was able to ”give him a piece of my mind", and  eye to eye this time. (For example I told him straight out that if he had taken a different approach from the beginning, explaining things properly, that would probably have made things easier for both of us!). On the other hand, I'm still not sure that wasn't all mostly ”water off a duck's back” on his part. Anyway, once again it ended in a kind of truce. Besides not having much choice, I do realize that he probably does know a great deal more about the latest progress in medicine than I do. (His communication skills and his ability to enter things correctly into the booking system, on the other hand...)

Back to the waiting room again, as I also wanted a couple of additional lab tests over with while I was there anyway. (When talking to the nurse on Tuesday, I had also asked her to check if those had been ordered at the lab, and she promised to remind the doc of that as well.)

You probably already guessed. Those tests had still not been ordered. So the lab nurse had to go and ask the him to fix that (I imagine her watching him like a hawk while he did it). She then came back, took my blood, and I was free to go...

... to a chemist's shop to collect new correct dosages of the medicines currently being changed. To be honest, I was half expecting the pharmacist to have to call the doc as well; but to my relief, the prescriptions had come in. They still caused some frowning on her part; but she was the calm and flexible kind of person and sorted it out.

Before walking back home again in the rain, I decided that what I really needed after 3+ hours of frustration was good old shopping therapy, in spite of it being lunchtime rush hour...  I am still careful about keeping distance, though, and limited the shopping spree to three shops. But I ended up successfully spending money I got for my birthday (back in August) on a soft jacket/cardigan + a new winter handbag  +  a bunch of flowers.

This week, besides continued step-by-step changes in dosage, I'm also shifting my intake of pills from morning to evening, according to doctor's orders. (Except the one I'm supposed to quit taking altogether from Friday anyway. I really could not see the point of changing the time of day for that one, for the last week only...)

The doc is supposed to call me again this Friday. Hmmm. 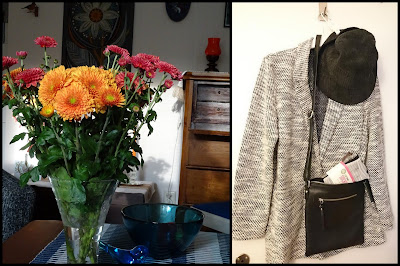