After my father died ten years ago, my brother and I were left with a house full of old papers and photos, most of which were related either to my grandfather's career as a journalist with special interest in local history, or to my dad's interest in railway history. Luckily, the main efforts of their interests in these fields had already been preserved in printed books.

When my grandfather died (in 1969, only 65 years old), he had nearly finished compiling a book about old 'crofts' in the parish where he grew up (small farms on ground owned by bigger estates - I think the English word croft comes closest). He grew up on one such croft himself. My dad (together with his mother and mine) completed the book and had it printed (much appreciated by the local history society).

After that, dad also wrote four books about railways in south-west Sweden. (He grew up in a house by the railway in the 1930s, which was what triggered his interest.)

After he died in 2011, there was an overwhelming amount of papers and photos left in the house to sort through and decide what to do with.

The railway-related stuff we donated to the national railway museum. In August 2012 three guys from there came down with a big truck and took more than half the contents of dad's very large study away with them. (Phew!) We also gave some papers related to my grandfather's research to the local history society.  Even so, quite a few papers and photos related to our own family history also came home with me. Every now and then, I've taken a plunge into them. Bits and pieces have also got blogged about now and then over the years. But I obviously do not have the same perseverance for this kind of thing as my forefathers. (And I've also no wish for my own study to end up in the same state as dad's in the end...)  After a while, I always feel the need to come up for air and let "here and now" take over again. But that also means that whenever something inspires me to dive into the history again, I always sort of have to start over! (And this, I guess, is a typical starting-over post.)

One day back in the summer of 2012 (while we were still up to our necks in it all), my brother and I went in search of the places where our paternal grandparents grew up, though - as we knew those still existed, and not too far apart from each other.

Our grandmother grew up on a farm. For both her parents it was their second marriage. Her father died when she was only 7 years old. Until she got married at age 30, she continued living on the farm in a family constellation consisting of her oldest half-brother (30 years older than her), her mother, a half-sister from her mother's first marriage, and a younger brother. (She also had five more grown-up half-siblings, one of whom returned from America to live at the farm again for a while when my grandmother was in her upper teens.) This is the branch of family history I heard most about in my own childhood.

The b&w photo of the farmhouse in the collage below is from the 1920s; the other three are mine from 2012. 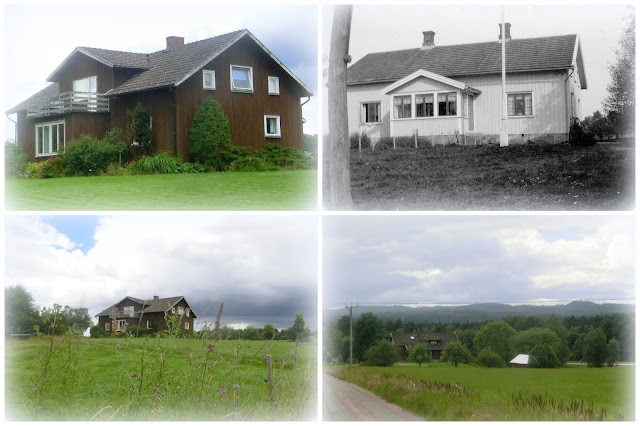 My grandfather on the other hand grew up in a small simple 'croft' cottage. As the only son of an unmarried mother, he was mainly brought up by his grandparents. (His own background was no doubt what inspired him later in life to dig into the history of other crofts in the same parish. But that wasn't clear to me back in my childhood.)

Back then, the cottage was grey and unpainted (the b&w photo). A century later, an idyllic little red holiday house. 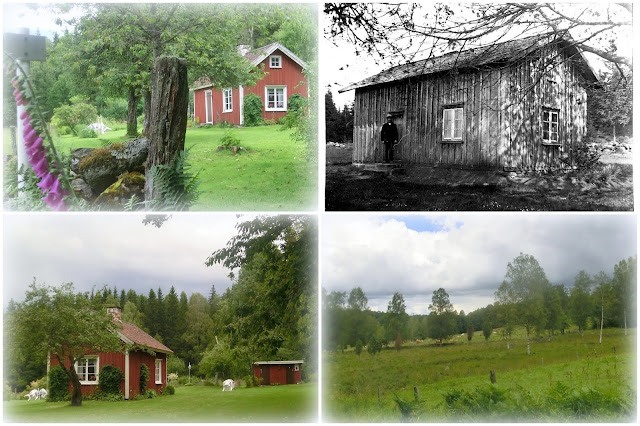 So what inspired me to bring all this up again, just now? Well, as so often, one thought leads to another. Recently a fellow blogger wrote about a manuscript left behind by his father. A Swedish friend posted on Facebook about her latest family history research. I discovered my 'new' printer (bought last spring) can scan documents as PDF. And so, one day I found myself returning to some of my grandfather's notes from back in the 1950s. If nothing else, perhaps I can scan some notes to preserve them in a more handy format for the future.

These are notes typed on typewriter by my grandfather himself back in the 1950s and marked as related to family history. Most of them are just "bits and pieces" from different sources. And some things he seems to have kept repeating and putting together in different versions. A bit confusing (for me) - but I can't really blame him, I suppose, as I find myself doing the same thing!

Overall impression: Some ancestors were crofters and very poor; others were farmers and a bit more well off, but still had their troubles. Most families back in the 1800s had a number of children who died very young. Many women died giving birth. People often married again after their fist spouse died. (Which means lots of half-siblings to complicate the family tree.) Some individuals were regarded as odd, mentally deficient or fragile (how each one of those would have been diagnosed today one can only speculate about). Some got some kind of financial support from the parish in their old age. Some were sent away to institutions. Some people died young, and others lived to be surprisingly old (well over 80 or even into their 90s), in spite of poverty and various hardships.

In among all the sad stuff one can come across some "gems". Like this piece of information:

My grandfather's grandmother's mother Annika (married to one of the Sven Larssons), born 1800 and died 1887, was "one of those women who back in the mid 1800s were hired to teach children to read and write, before there were any regular schools".  My grandfather notes that obviously Annika also taught her daughter Rebecka (his grandmother) these skills, because even in her old age (she lived to be 79), she still had a neat handwriting.

(This story is included in my grandfather's book, related to the croft where Annika lived, but without making a point of the people mentioned being his own close relations.)

Alas I have no photos of neither Annika nor Rebecka.

It may be a bit of a stretch, but I'm linking this post to Sepia Saturday 559. 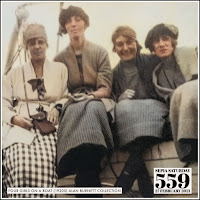 Posted by DawnTreader at 14:07