Christmas Around the Corner 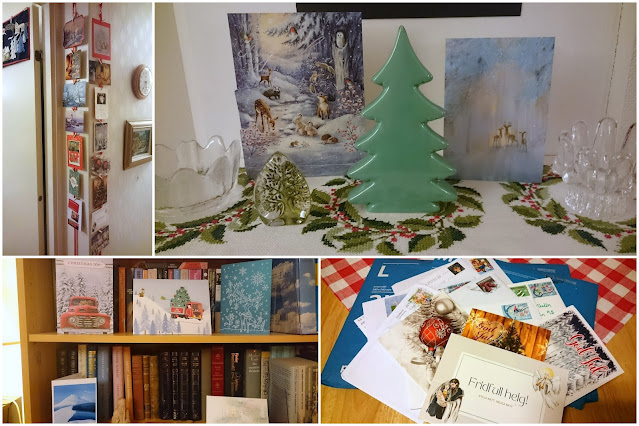 It's been kind of a crazy week. After two weeks of lots of snow and cold weather, it all turned to rain and slush. I didn't go out much until the snow and ice was properly gone and  streets and pavements bare again... 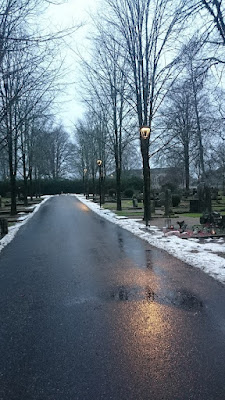 On Thursday I was able to go out and post my Swedish Christmas cards and parcels, though. I preferred to go to the main post office for that, in case the more local letterbox might be too full to want to swallow my three big 'parcel' envelopes.

Cards and parcels have also been delivered to my own postbox this week. As can be seen in the collage at the top, I've put up my usual red ribbons to display card on, by the door between my living room and study - and some cards that can stand for themselves have found their place on various bookshelves. 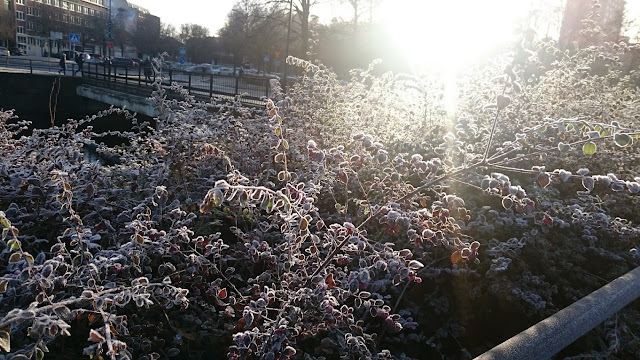 Yesterday, temperatures were back below zero (freezing point) and frost, and also a glimpse of the sun again. I took advantage of that to walk into town for a couple of minor errands.

Today, I found myself once again back in a grey and foggy world, hesitating between frost and thaw. I went for a walk to the recycling containers - a rather depressing sight. (I took the photo to send a "report" email when I got back home. They encourage that on that sign.) 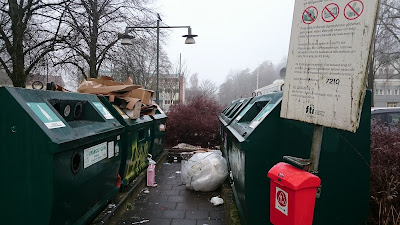 (No, that red letterbox is not for Christmas cards... It's for used batteries!)

This afternoon, I've been waking gnomes and Santa figurines from their 11-months-a-year sleep. Photos may appear some other day; they're still feeling a bit dazed and sleepy, being woken up on such a grey and dismal day with almost no natural daylight - and no snow!

Those living in the bathroom said they agreed to a photo, though. There's never any daylight in there anyway, and they seemed eager to get the celebrations started:

They are magic plastic ones that can be reused over and over on tiles. They belonged to my mum. She used to have them running all around her kitchen at Christmas.

Besides contemporary Christmas stuff, I've also kept myself busy with interpreting postcards sent by my great-aunt Gerda from France in mid December 1914, to her brother in Sweden. Have you ever received Christmas greetings with cannons or soldiers on them?? I'm linking two posts (and three cards) this week to Sepia Saturday 601 from my blog Greetings from the Past: (1) La Guerre (2) Winning or Losing 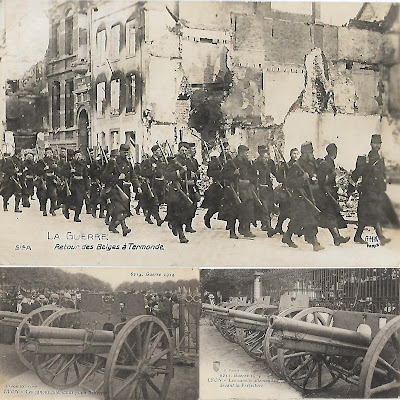 ...Wishing us all a Peaceful Christmas...

Posted by DawnTreader at 20:47