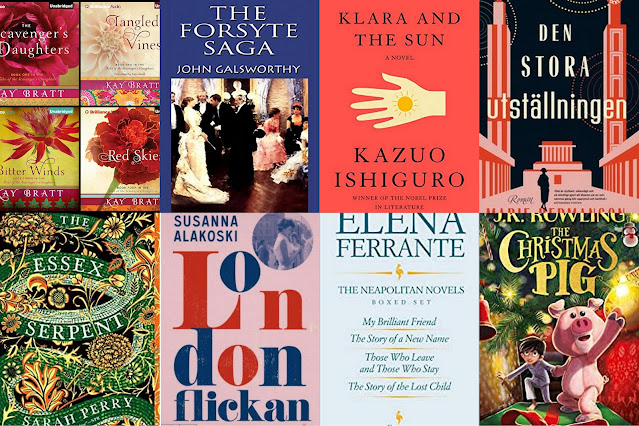 I just had a look at my list of books that I read in 2021. On average, I've consumed about 1 book per week - which is pretty much what it usually adds up to at the end of a year for me. That includes printed books, e-books, and audio books. Some bought, others borrowed; some in English, some in Swedish: some new, some old; some read for the first time, and some re-read; some reviewed before on this blog, and others not.

Below is a selection of titles, including some that I did write reviews about, and some that I didn't. Normally I don't review Swedish books here unless I know they can also be found in English. But I'm making a few exceptions here... Even if you can't read the books, mentioning them may still say something about what kind of books I've been reading.

In the early months of the year, I read a series of books by Kay Bratt, set in China, The Scavenger's Daughters. From those, I'm still left with a lot of "images in my head" of lives very different to my own. Around the same time, I also read a book in Swedish written by a friend of mine who lived in China for many years and who was recently asked to write a summary of the history of missionary work in China by a certain Swedish church/denomination.

In March, I read a Swedish book that made a much deeper impression on me than I had expected. You won't be able to find it in English, but I'll mention it briefly anyway. It's one I inherited from my parents. It's a diary kept by a Swedish soldier, crofter, navvy and blacksmith who lived in this area of Sweden 1843-1925, during the same time as some of my own ancestors on dad's side of the family. The manuscript was found in 1990 and was published by the local history society in the village where my parents lived. The title translated would be something like 'Many dogs will be the death of the hare' (a proverb). It's written in the local dialect of 100+ years ago - and moreover there were no spelling rules back then! I always thought it would be hard to read. But once I got started, I found myself fascinated. I could see quite a few parallels to the life of my p. grandfather's grandfather, who was a soldier, crofter and  stone mason. Around the same time, I was also going through and re-typing (into my computer) some family history notes by my grandfather.

In May, I listened to The Forsyte Saga by John Galsworthy, as audio book. That brought back memories of the black & white TV series based on those novels from the 1960s. Quoting from my own review:

If you're not familiar with the story, it spans over three generations of a "commercial upper-middle class" family in London, starting in the Victorian era during the 1880s and ending in the early 1920s. It's a lot about their relationship to money and social status, but also deals the general developments within society during that time - and not least the changing position of women.

In July, I read Klara and the Sun by Kazuo Ishiguro (winner of the Nobel Prize in literature in 2017). It's another one not easily forgotten, as it has an AI robot as the main character.

In August, I read a Swedish novel which I first borrowed as e-book from the library, but then decided to also buy in paperback, as I really liked it and may want to return to it. The author's name is Marie Hermanson. Several other books by her have been translated into English, but alas I can't find this one among them (yet). It was published in Swedish in 2018, and the title in English would probably be 'The Great Exhibition'. It's about the Gothenburg World's Fair in 1923, and involves Albert Einstein who was invited to hold his Nobel Lecture there. The author has taken some liberties in getting the famous man involved in the plot of her novel - but it's done in a both clever and entertaining way. If it has not yet been translated into English, it ought to be!

In September, I read another Swedish novel, by Swedish-Finnish author Susanna Alakoski. It's the second in a series of novels about the history of textile workers in Finland and Sweden. This book takes place in the 1950s and (among other things) involves the immigration of many Finnish textile workers to Borås, where I now live. Where I grew up myself in the 1960s (100 km or so north of here) we had a lot of Finnish immigrants as well. Part of this novel is also set in London, though, and the book title in English would be 'The London Girl'.  I love the author's short introduction to the book: "My mother worked as a nursemaid in London for five years. There she bought a coat and met Frank Sinatra and Liz Taylor. That's all I know." And from that she built a whole story... I found that inspiring!

Another book I read in September was The Essex Serpent. Quote from my review:

I found this a captivating but rather unusual sort of novel - hard to quite categorize. It's far from a straight forward love story; and at the same time, the Essex Serpent remains more of a background mystery than the real focus. Themes of love, friendship, grief, fear, obsession, superstition, faith and science keep intertwining throughout.

In October, I listened to a new children's book by J.K. Rowling - The Christmas Pig. It's a story for young children, but still enjoyable for adults as well (at least if you're still in touch with your inner child). It's about a boy who loses his favourite toy, a plush pig. Just before Christmas, it gets thrown out of a car, and is lost. For Christmas, he is given a new one - but replacing a favourite toy is hard: a new one is never quite the same... However, Christmas Eve is "a night for miracles and lost causes" ... The replacement pig takes Jack on a magical journey to seek for his old friend in "the land of the lost" - which turns out to be the mystical place where all kinds of lost things go - not just toys, but also things like scissors or combs or whatever... (I can see this book being turned into an animated film one day!)

After I got my new Kindle towards the end of October, I started reading the Neapolitan Novels by Elena Ferrante. I came across a cheap Kindle offer of all four novels in one. So far I've read the first two parts: My Brilliant Friend and The Story of a New Name. I think I'll wait to write more about them until I've finished all four, though.

Happy New Reading Year 2022 to everyone who loves books! :)

(If you wish, name a favourite book of yours from 2021 in the comments!)

Posted by DawnTreader at 17:06