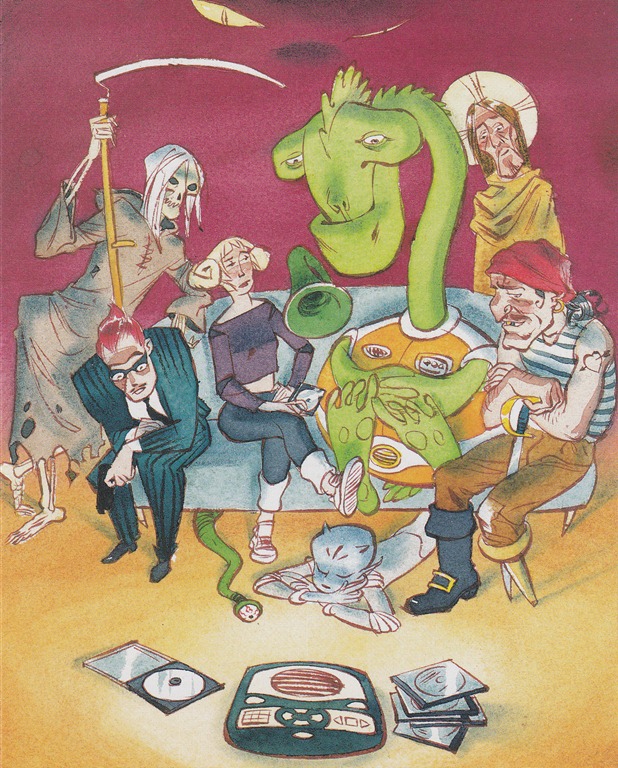 The picture above is a showcard for The Swedish Library of Talking Books and Braille (Talboks- och Punktskriftsbiblioteket, TPB);  it’s a picture postcard I got some years ago at the town library.

I have mentioned several times on this blog that I listen to audio books a lot, the main reason being that a combination of neckpain plus certain visual problems often makes it difficult for me to read for very long at a time.  Lucky for me, commercial audio books on CD have been growing in popularity among all kinds of people over the last decade. When I started listening to audio books back in the late 1990’s, and even more from 2000 onwards, they were still mostly on cassette tapes – the talking books for the visually impaired as well as the commercial ones.

The libraries back then had a very limited choice of the commercial kind, and so I soon went on to ask if I could also borrow Talking Books produced primarily for the blind. No problem; the rules for borrowing those also include other kinds of handicaps which are an obstacle to normal reading.

The first library for the blind in Sweden was founded in 1892 through the initiative of a philanthropic braille association. At the outset these activities were carried out entirely on a voluntary basis and continued in the same manner after the Swedish Association of the Blind took charge of the library in 1911.

1955, the lending of open reel talking books started at the Library of the Swedish Association of the Blind.

In the 1970s, talking books were copied onto compact cassettes.

In 1996, they started transferring recordings to the new digital DAISY format (on cd-rom). Since 2001 all new talking books were produced in the DAISY format.

Technology keeps moving forward, and yesterday I took yet another step into the world of Talking Books by applying at my local library for a password which makes it possible for me to download talking books directly from the TPB online library to my computer.

My request turned out a bit of a challenge for the librarian in charge at the small branch library, since they don’t get a lot of requests of this kind. Since he also had to pass on instructions to me about the whole downloading procedure, he needed some time to rehearse it himself first. So we agreed I’d go back home for an hour and come back later! (I live only five minutes walk away). I think I was probably more up-to-date with the downloading details than he was, just having read about it - I really only needed the password… But the registration had to be done by him and he was also obliged by the rules to give me a lesson in the downloading procedure. Anyway, we managed it, and when I got back home the password was waiting for me in an email and I was able to complete the procedure and download my first talking book over the internet. I then copied it onto my Android phone, where I can listen in the free Mort audio books app I already had installed since before. (Having it on the mobile phone means I can keep listening whether I’m resting or doing housework or out walking or whatever.)

Just before I was hit by my latest additional eye problems back in March, I had started on a library book (printed, in English), which I didn’t get to finish before I had to return it to the library this week – The Tiger’s Wife by Téa Obreht. This was the first one I now downloaded from the TPB library (in Swedish translation) and so I’m finally getting on with it!

A big bonus with the possibility to download directly from home is that I no longer have to wait for the popular ones… I’ll probably still be popping into the library now and then for inspiration but it’s also great to have immediate access to almost any book I want!

Posted by DawnTreader at 22:00