Some time ago, Librarian posted a review of a book My Lord Duke by E.W. Hornung (1866-1921) – an author perhaps better known for his stories about a ‘gentleman thief’ by name of Raffles. At least that was the only ones in the bibliography that rang a little bell with me. I was also interested to learn that Hornung was brother-in-law to Sir Arthur Conan Doyle.

I went to browse titles by this author free for Kindle, and came across The Camera Fiend (from 1911).

There’s just no getting away from those early 20th century cameras and photographers lately!! 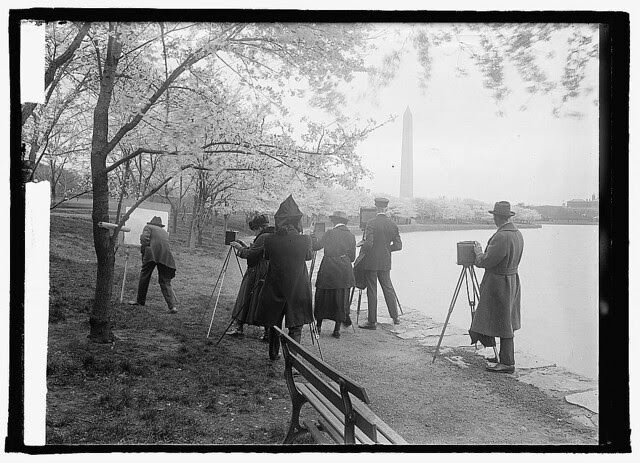 This photo was used as prompt for Sepia Saturday this week.
http://www.flickr.com/photos/library_of_congress/5890411469/

They also seem to turn up in every other book I read:
The House of Arden. The Secret Keeper. The Year After.

The intriguing thing about The Camera Fiend (besides the title) was that there was no introduction to it on Amazon (just a paragraph about the author) and not a single review. The only way to find out was to read.

So I did (this weekend). A little hesitant through the first chapter or two, not really having any clue at all what kind of book it was supposed to be. My first guess was to place it in the genre of humour, but soon the story started taking unexpected twists and turns, and that rather fast. Actually a lot of the charm lies in the surprise elements, and not knowing where it may be going next… So I don’t want to give away too much. But the further I read the more the plot thickened and I found it harder and harder to put the book down. (Today I just kept reading, except for a cold windy walk to the supermarket, and lunch.)

The main character is an asthmatic young man (the word teenager was not yet invented) by name of Tony “Pocket” Upton, on leave from boarding school for a couple of days to go into London to see a specialist doctor about his asthma medication. His intention to stay the night with friends does not turn out quite as planned… and trouble escalates in ways he’d never been able to imagine. Let it be enough to say that the story also involves a suspicious death or two, a professor interested in photography and spiritualism, a young girl, and a private investigator with assistant.

It was an entertaining read, and I think I’ll try more titles by this author.

You cannot sit up half your nights with asthma and be an average boy.

Pocket was not one of nature’s heroes, but he had an overwhelming desire to behave like one.

That is the worst of your conscientious ass; he takes his decision like a man; he means to stick to it like a sportsman; but he cannot help wondering whether he has decided for the best, and what would have happened if he had decided otherwise, and what the world will say about him as it is.

“I think that Dr [---] has the strangest power of any human being I ever heard of; he can make you do anything he likes, whether you like it yourself or not.”

Posted by DawnTreader at 21:33