It is not every day that one wakes up in the morning with no particular plans for the day, and ends up at a fairytale wedding. Just now I seem to be making a Saturday habit of it, though. Last week it was our Princess Madeleine (even if I only took part via television). Today I still don’t know whose wedding it was, but I ended up enjoying (part of) it anyway. And live this time!

We had another beautiful summer day today, after rain yesterday and more rain predicted for tomorrow (actually it’s starting as I write this, Saturday evening); so I decided I’d better take advantage och spend some time outdoors this afternoon.

When I set out from home (after a salad lunch) I still hadn’t decided where to go. I knew that there were “things” going on in the town centre – a sports event, a triathlon… So there would be photo opportunities. But also a LOT of people, and I wasn’t really sure I was in the mood for that. My other alternative was our Museum Park, but that’s a longer walk… I actually postponed the decision until half-way into town (where I had to choose).

But I chose the Museum Park; and no regrets!

I took some photos on my way there too, but I’ll save those for another day and post. This is what I want to share today: 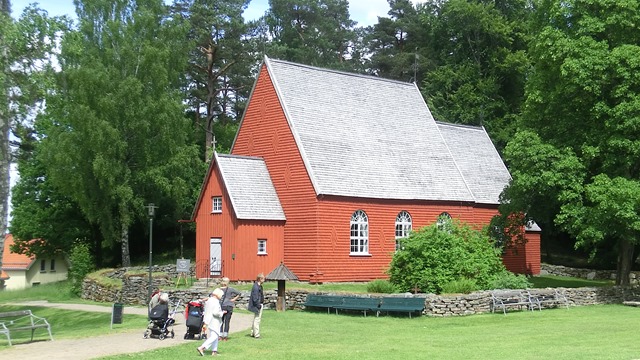 One of the buildings in the park is this old church, originally built in 1690. It was moved to its present location in the museum park in 1914. I’ve blogged about this church (and museum park) before so some of you might remember it. The church is part of the museum, but is also used for wedding ceremonies and christenings and other special occasions. When I passed it today I noticed a sign on the door which announced that a private wedding ceremony was taking place (“welcome back later”).

So I decided to hang around for a bit and maybe get to see the couple when they came out. While waiting, I had a cup of tea at the café, and a pastry which goes by the name of “mazarin” here (I don’t know what it may be called in English, if you have it at all): 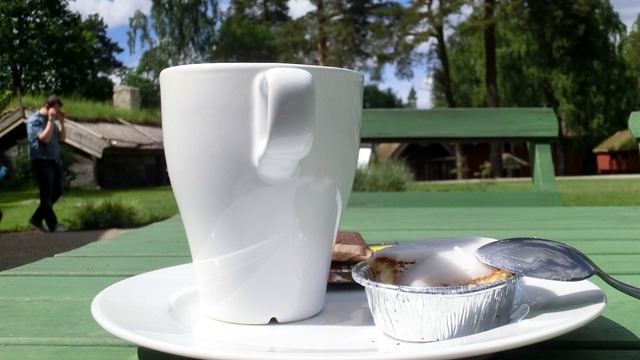 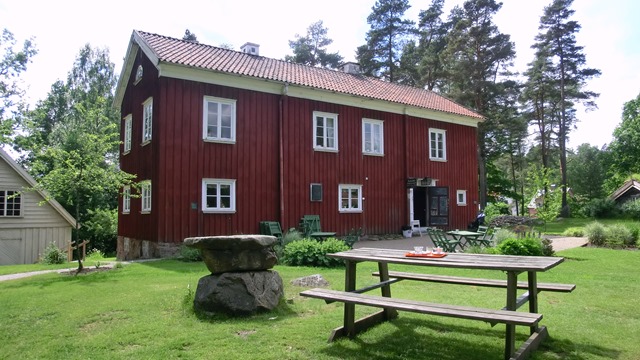 The café. An old inn which like all of the other old buildings in the park was moved here from somewhere else in the area (instead of just being torn down).

As I sat down at a table outside, I spied with my little eye something interesting half-hiding behind the next building, so I had to go check that out before I drank my tea: 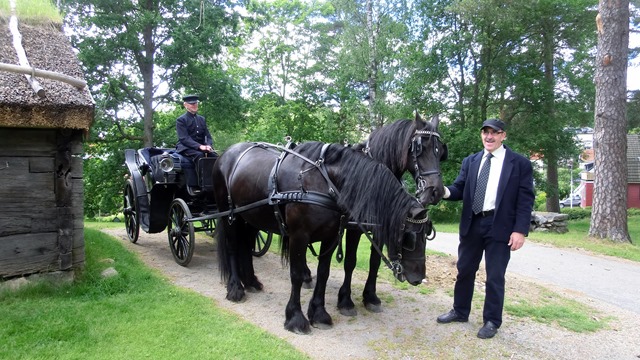 Well, now I really had to stay and watch the rest!

Eventually, out they came: 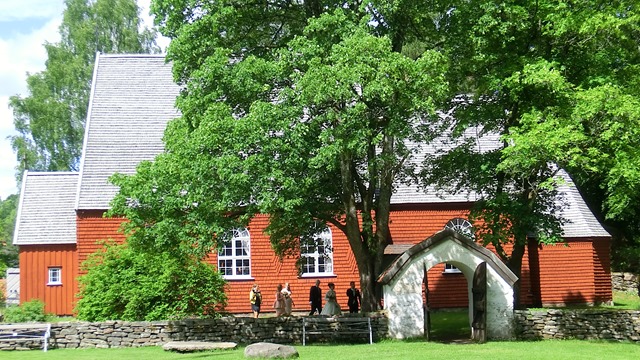 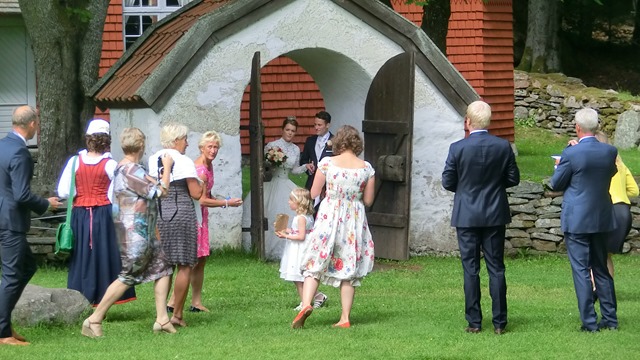 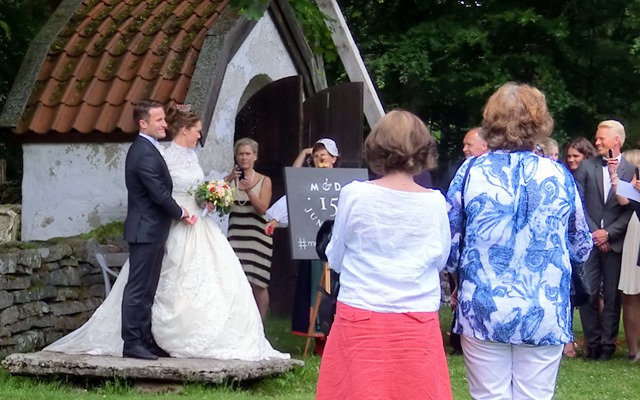 The couple stepped onto the special flat bridal stone outside the church which has traditionally been used for the same purpose way back through generations. They stood there quite a long time while all the wedding guests came up one by one to hug them and congratulate them. 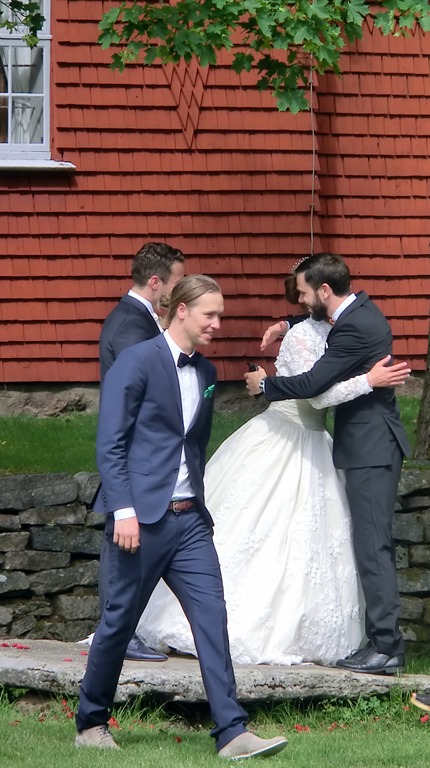 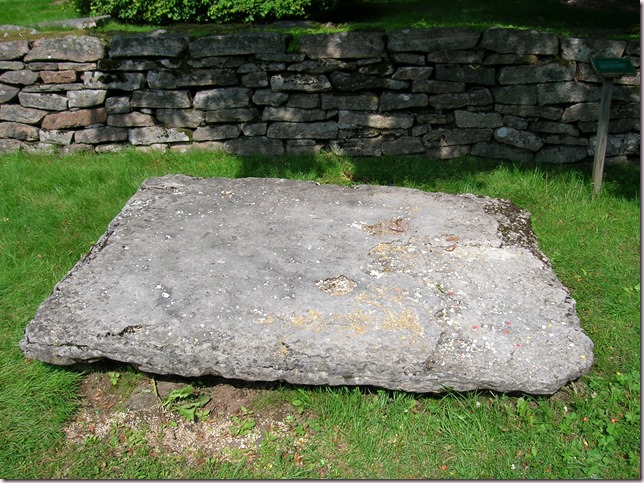 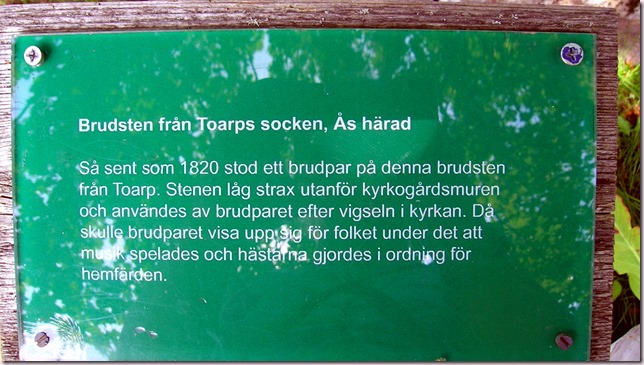 The sign says: “Bridal stone from Toarp parish, known to have been used there as late as 1820. The stone was placed just outside the wall around the churchyard, and was used by the bridal couple after the ceremony in the church. They were then supposed to show themselves to all the people while music was played and the horses were prepared for the journey back home.” 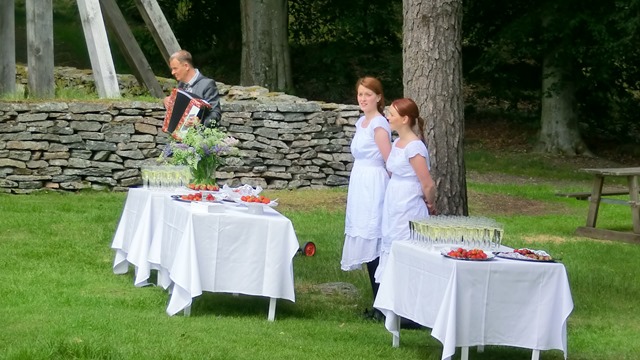 This couple today had evidently decided to follow the old ritual literally. While they were standing on the stone being greeted by all their friends, a musician was playing the accordion in the background, and the invited guests were served strawberries and champagne (or it might have been low-alcohol cider, considering that some of them must have been driving). 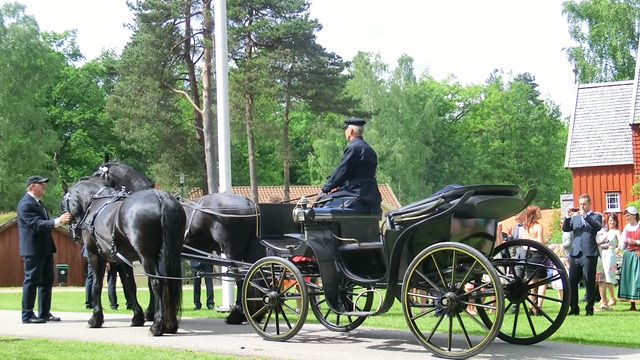 Finally, it was time for the bride and groom to enter the horse-drawn carriage to go wherever it was they were having the reception. Not all easy getting the dress aboard: 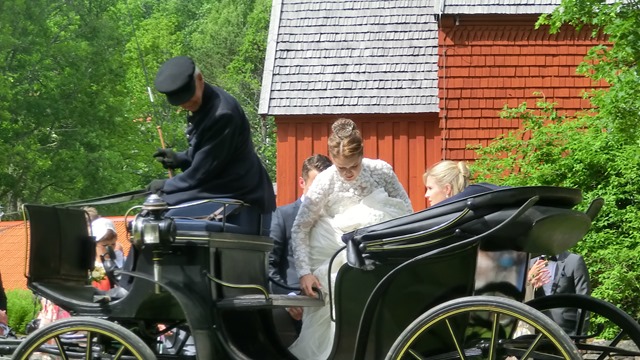 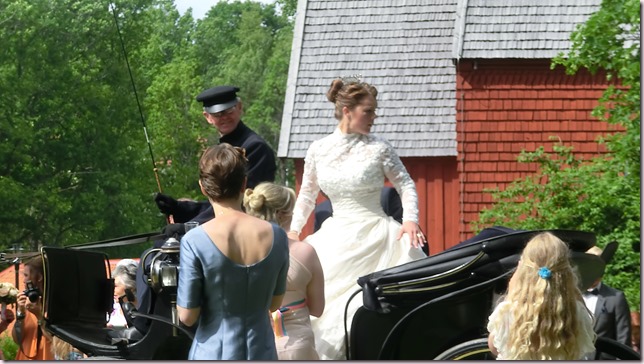 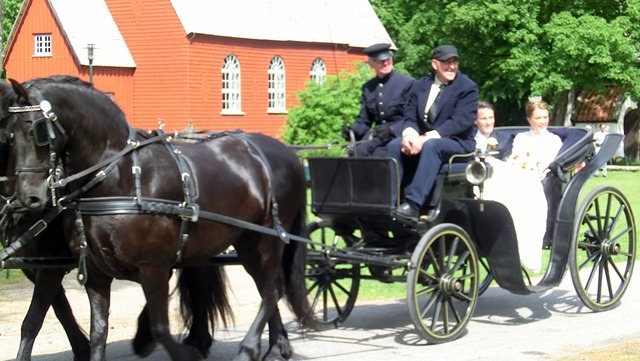 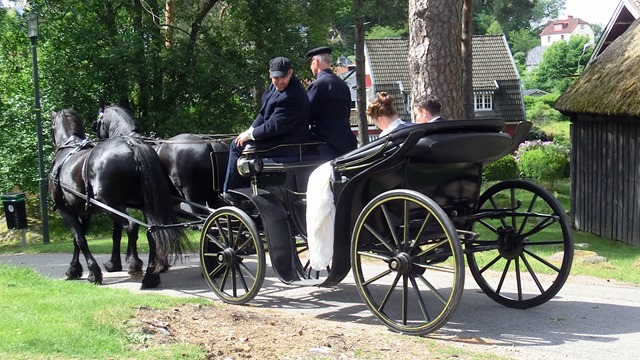 Goodbye, and thanks for the “show” :)
May you live happily ever after, whoever you are!

Posted by DawnTreader at 22:15