It was a dark and stormy night…

It seems we got our worst gusts of wind from the storm Simone here late last night around 10 pm.

I thought I had taken enough precautions to remove/secure exposed items on my balcony earlier in the day, but what I had missed was that my clematis trellis was not fastened securely enough to the wall… Of course the playful Simone caught sight of that immediately, and only needed a little whirlwind or two to rip that piece of plastic off the wall… 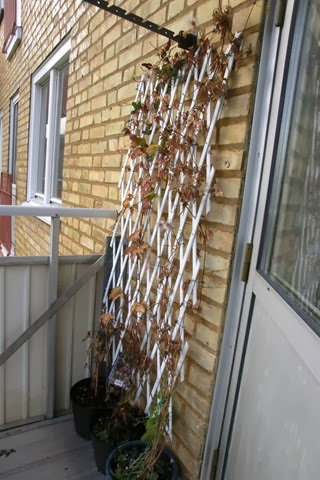 I saw it happenening though, and managed to get out there and raise it up again and fasten it with a lashing strap to the airing rack (the metal pole sticking out from the wall). Not so much worried about the plants as for the trellis to fly off and maybe cause damage somewhere else! Wasn’t sure the strap would hold it either, but it did. While I was at it, I also strapped the box of strawberry plants onto the bench, hoping they’d “help each other” stay in place that way… (Everything else small and loose I had taken inside.) (the photos taken this morning)

I was a bit nervous for a while but within the next hour or so the worst of the wind seemed to have “moved on”, and then I decided to just go to bed…

From what I could see from my windows in the morning, nothing too dramatic seemed to have happened in the immediate neighbourhood during the night.

The morning news on the radio reported over 60.000 households in southern Sweden to still be without power. We don’t seem to have had any powercut here in town though. And the morning newspaper did not list anything in the village where we have The House either, so keeping my fingers crossed about that (for now).

The most damage was caused in the southern parts of Sweden and especially along the coasts. Wind gusts of hurricane force were reported from Halland. Parts of roofs etc blown off, trucks tipped over on the roads, and lots of trees falling over roads and power lines etc. The precautions taken by cancelling all trains in southern Sweden, as well as many ferries and flights and busses, together with closing certain bridges, and telling people to stay in, must have prevented many more serious accidents though. So far I’ve heard no storm-related deaths reported.

Today we’re still having very windy weather (even if not storm force) with rainshowers coming and going every five minutes or so. Having no special reason to go out, I decided to just stay in today as well.

Posted by DawnTreader at 14:43