I'm (re)reading (on my Kindle) another old Dalgleish-mystery by P.D. James: Unnatural Causes. I've not finished the book yet, but was again struck during the reading by how much technology has changed since the mid 1960s. However this story might end, it is clearly set in a different time than the 21st century…

[the] portable typewriter was ready for them at the Inn, placed squat and shining on the edge of a small oak table in the saloon bar. The attentions of the finger print men and the typewriter experts seemed to have given it an added lustre. It looked at once ordinary and menacing, innocent and dangerous. It was, perhaps, the most intimate object that [X] had owned.  --- They knew at once why it was there. They were required to type two passages of prose; 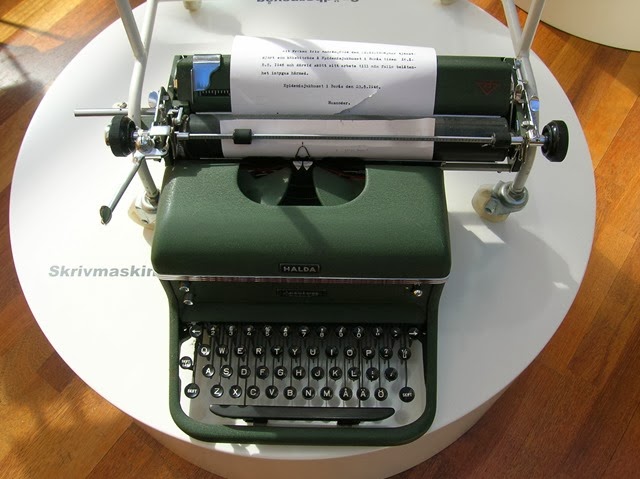 Typewriter exhibited at our hospital's museum a couple of years ago

Ah, the good old days for detectives when they might be able to tell from a typed sheet of paper not only which typewriter was used to write it on, but even who the typist was, based on the force of their individual keystroke…

(In the quotes below I replaced actual names of characters in the book with letters A-G.)

[A] took some time to settle herself but once started the strong fingers, bony as a man’s, danced above the keys to produce, in an incredibly short time, two accurate copies elegantly set out and perfectly typed.

[B] used all five fingers correctly although her speed was only moderate and, unlike [A], she kept her eyes firmly on the keys.

[C] staring at the machine as if she hadn’t seen one before, protested shortly that she couldn’t type --- Eventually she was persuaded to make a start and after thirty minutes’ effort, produced an appallingly typed two pages  ---

[D]  when he could bring himself to touch the typewriter, was surprisingly quick and accurate ---

[E] was almost as expert as [A] and rattled away in sullen silence.

[F] said briefly that she couldn’t type but had no objection to trying. She refused Courtney’s help, spent about five minutes examining the keyboard and the carriage and settled down to the laborious task of copying the passage, word by word.  ---

[G] was hopeless, but even Courtney couldn’t believe that the man was faking.

To my amusement, when googling my choice of title for this blog post, that led me on to the two videos below. The first one is very short. Watch it! And if you doubt its ‘authenticity’, go on to the next one!

If anyone is wondering what about typewriters evokes nostalgia in me, the answer is that most of my working life I worked as a secretary. When I went to secretary school at age 20, we still only had one electric typwriter in the classroom (and took turns using that). However, I knew how to type properly long before that. I was only 13 when I first learned, using my dad’s old typewriter at home, and a correspondence course book of my mum’s, with a cardboard shield over the keyboard to prevent me from looking at the keys.

I would not really want to go back, though!

Posted by DawnTreader at 19:50