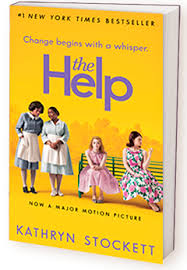 I listened to this as audio book in Swedish translation. I’d never heard of it before, just happened to see it on the CD audio book shelf in the library, and it caught my interest.

The story is set in Jackson, Mississippi, in the 1960’s, and is told from the perspectives of three different women. Skeeter, a young white girl from a wealthy family, with dreams of becoming a journalist (while her mother only wishes for her to find a suitable husband), comes to befriend Aibileen, a black maid working for one of Skeeter's closest friends. Aibileen is outwardly subservient, but well read, and used to doing some writing of her own too (although so far only for herself, and without ambitions). Aibileen in turn has a friend, Minny, also a maid, who used to work for another old friend of Skeeter’s in the past. Minny is a lot more temperamental and outspoken than Aibileen; which has often got her into trouble with her employers.

It’s an era of blatant racial discrimination, and Skeeter, feeling a bit rebellious about society’s rules in more than one area, gets the idea to write a book about the situation of black maids from their perspective, by interviewing them about their lives. The plan is to get the book published anonymously, and using fake names for everyone involved. She gets Aibileen and Minny to help her with the project. But everyone is still very much afraid (for good reason!) of what the repercussions might be – not only for themselves, but also their families – if the truth leaks out.

I found this a well-written and interesting book, bringing the time period and situation back then to life – well, as far as “rhyming” with the news flashes that reached us here in Sweden back in the 60’s, anyway. (I was born in 1955, so in the early 60’s I was only a child. But when Martin Luther King died I was 13, and able to take in a bit more of the discussions of racial discrimination etc. I still have in my bookshelf a copy of Coretta Scott King’s book about her husband, in Swedish translation, printed in 1970.)

One of the strongest points made in the novel is the basic contradiction of the white upper class women leaving their children in the care of the same maids whom they keep treating as less than human.

PS. I just looked up some quotes from the book on the internet, and was a little taken aback by how big a difference it sometimes makes to read a text in the original language compared to reading it in translation. The Swedish translation and audio recording in this case made no or very little attempt to imitate the dialect/grammar used by the black maids (“You is kind. You is smart. You is important.”)  No doubt because it would be linguistically impossible to do this in a meaningful way in modern Swedish. But it seems from the quotes that the original text makes this distinction throughout. My guess is that reading the book in English thereby probably emphasizes the class differences even more. What effect this may have on the general impression of the book for an American reader is hard for me to say, though.

I also find that the book has been turned into a movie.
I think I shall have to get it on DVD as well!

Posted by DawnTreader at 14:50