Today started out sunny but not too hot, and I decided it might be a good day to go on some little adventure in the afternoon (after an early lunch at home).

However, this week there's way too much adventure for my taste going on in the central parts of my town, as in Borås we are just now hosting the Swedish Championship, with lots of different sports going on all over the place every day for a whole week.

One consequence is that some streets have been turned into racing tracks etc, which in turn means that not all buses go where they usually go; and you can't even be sure of being able to walk where you intended to to walk...

Sports enthusiasts and holidaymakers may be having the time of their life; but for ordinary citizens just wanting to get their ordinary errands done, it's a hassle!

As for me, I have next to zero interest in these sports events; and after my fall some 6-7 weeks ago, even less desire than usual just now to rub elbows with crowds of excited sports spectators...

So I decided to seek quieter adventures in a part of town not so much involved in all that.

Just recently, we had some changes in the (permanent) bus routes within the city; one or two of which can actually be helpful to me - as they make it possible for me to travel to certain places without passing the city centre and/or changing buses. So I decided to try out one of those today. Not all the way to its destination (I might try that some other time); but part of the way, taking me closer to our museum park (open air museum, with old buildings). There's still a bit left to walk from the bus stop, but it is the least boring part, as I don't walk there so often.

Just where I got off the bus, there is another little park which I also decided to have a look around before going further. But I'll save those pictures for another post.

However, walking that way, I came out somewhere else than I usually do; and as a result also ended up "getting lost" for a bit - not being so familiar with the narrow old streets in this part of town. (Didn't get so far off the mark that it really mattered, though!) But a street that I thought would take me straight to the museum turned out to go down to the lake below instead... 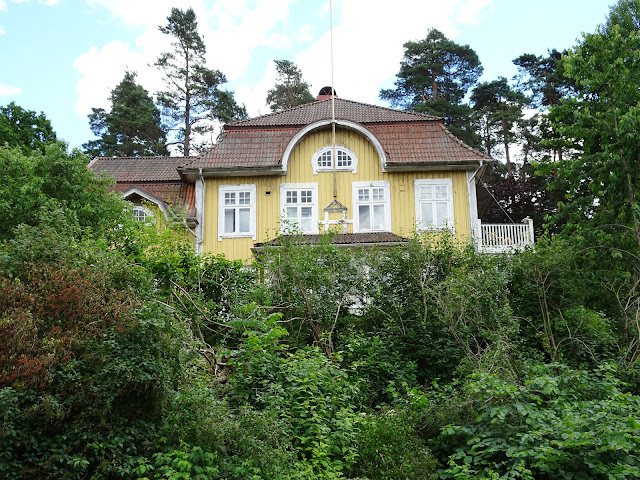 Along the way I happened to catch sight of this old wooden house.  I've seen it before but not from this direction, I think. Anyway it reminded me of Villa Villekulla - the fictional home of Astrid Lindgren's Pippi Longstocking... 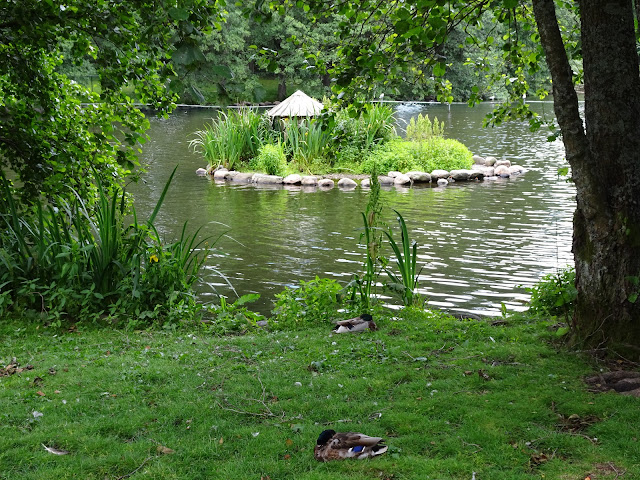 From the lake I had to walk back up a hill again to get to the museum... but I preferred to take a longer sloping street rather than the "shortcut" straight up these stairs: 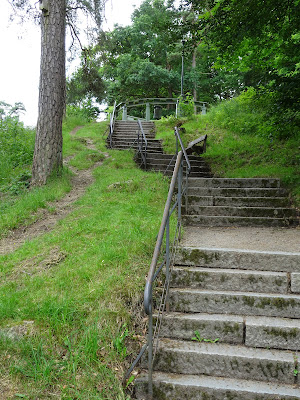 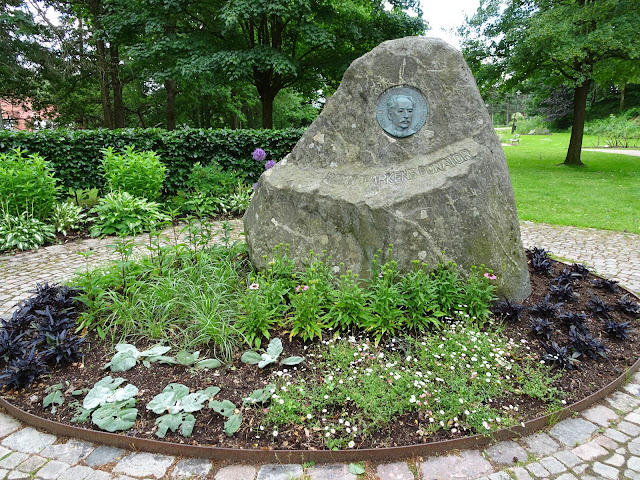 Monument honouring the founder of the park (~ 100 years ago). 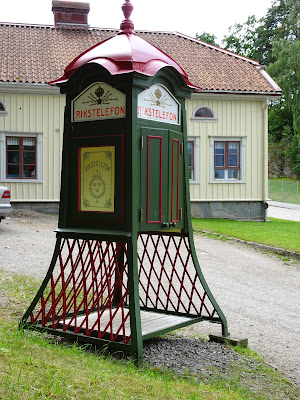 Old phone booth at the museum. No phone inside, though! 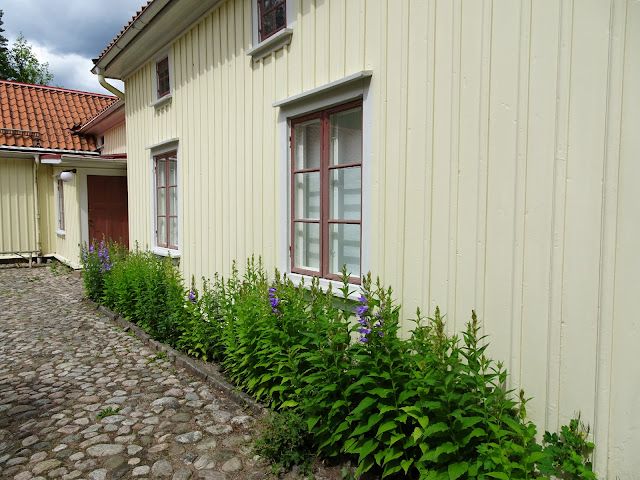 The yellow building houses the reception and exhibition halls (for temporary exhibitions) - and offices and workshops, I think. 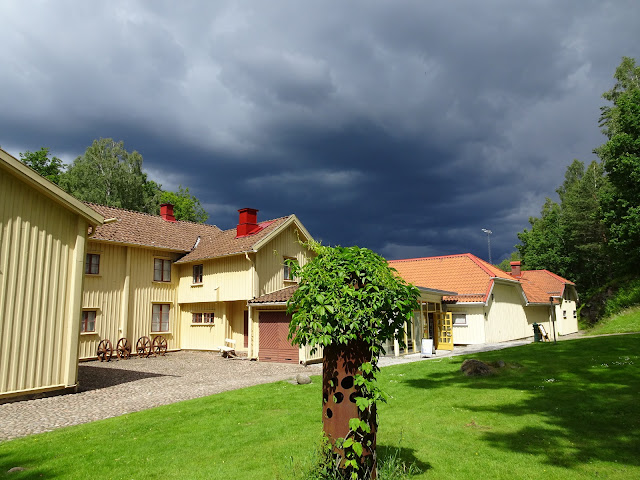 Ooops! Dark clouds gathering from that direction... I may be in for more of an adventure than I thought! 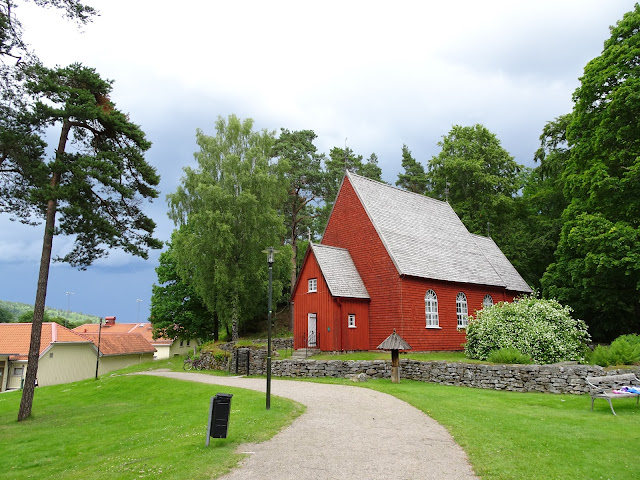 Old wooden church from the 1690s, originally built somewhere else (a smaller village), but moved to this park in the early 1900s. There are no regular services held in this church now - it is more of a museum - but it is popular for weddings in the summer season. 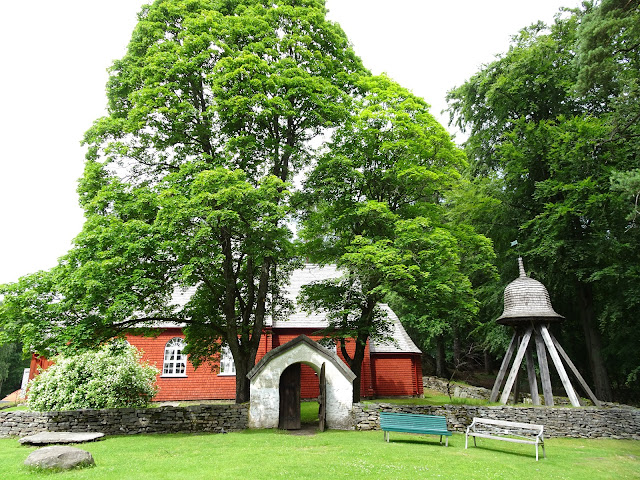 As it is the tourist season, the church was actually open for visitors today. (It's only open when they have guides there, as there are so many valuable historic objects inside.)  I took the opportunity to go inside and take some photos. (First visit with my new camera...) I'll save those for another post though, as this is Outdoors Wednesday! 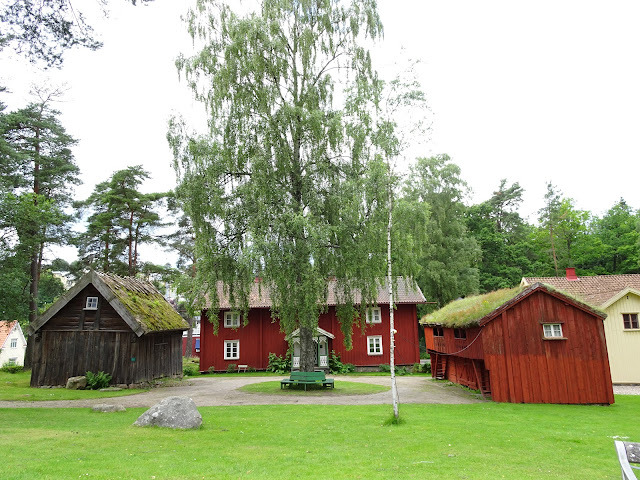 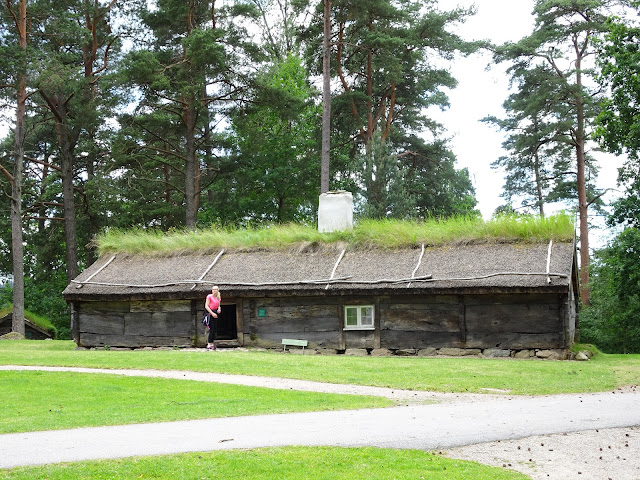 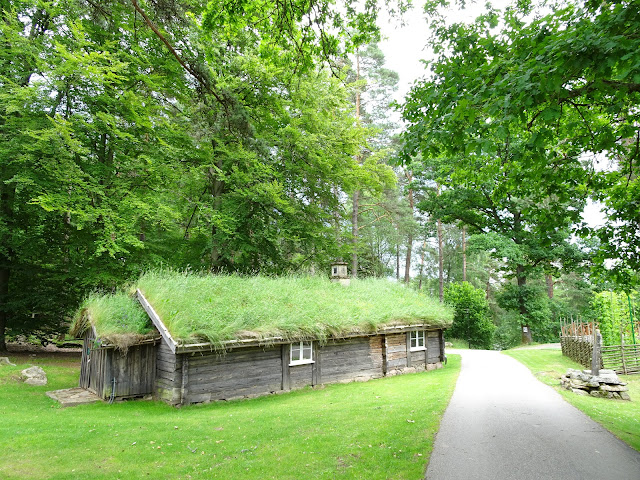 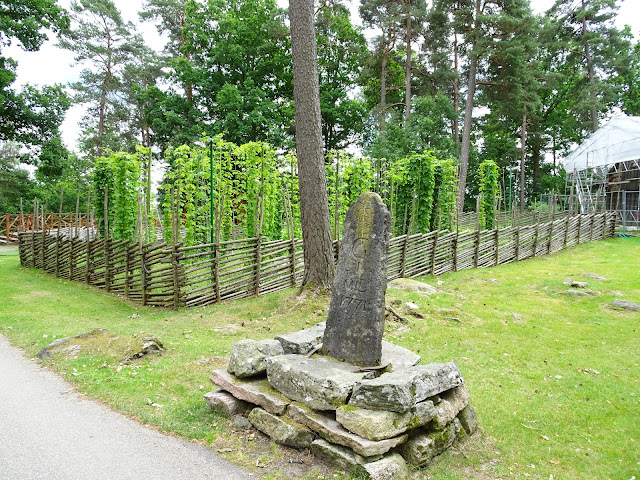 Old milestone (to tell the distance to/from somewhere).
And a hops/herbs garden in the background. 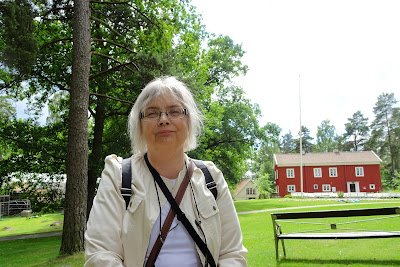 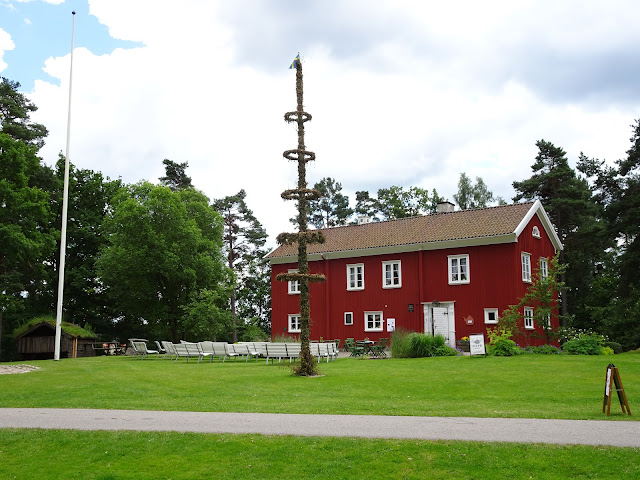 The midsummer pole is still up in front of the old inn; where there is also a café open in the summer afternoons (with tables indoors as well as outdoors). 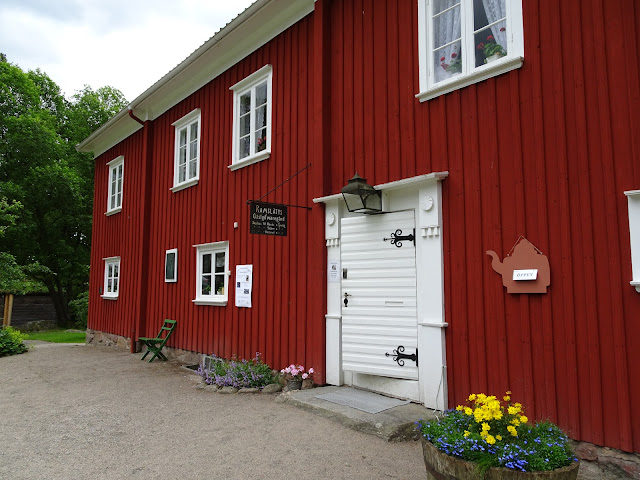 Lucky for me! as thunder was now rolling in the background, soon  followed by heavy rainfall... 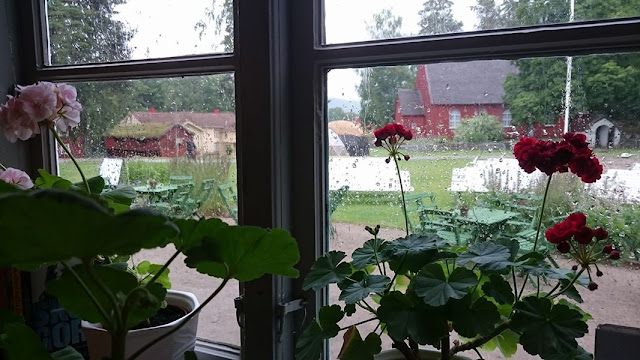 So I ended up sitting in that café for a good while. But finally had to get out into the rain anyway, in order to catch my bus back home (about 15 minutes walk to the bus stop - the "straight" way).

But I did have a rain cape in my little backpack; and as I was going straight home, and could get a dry change of clothes as soon as I got in... Well, never mind!