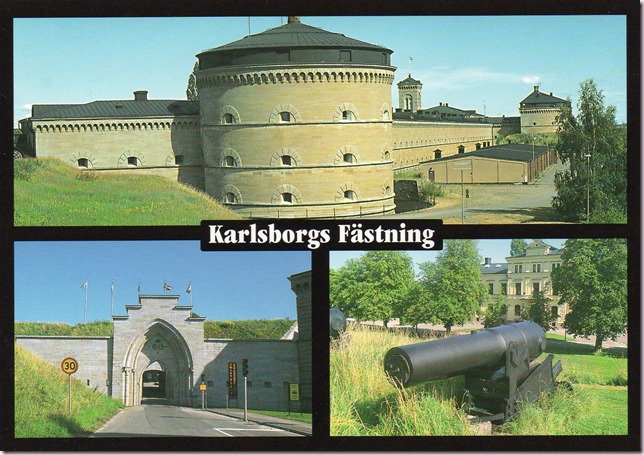 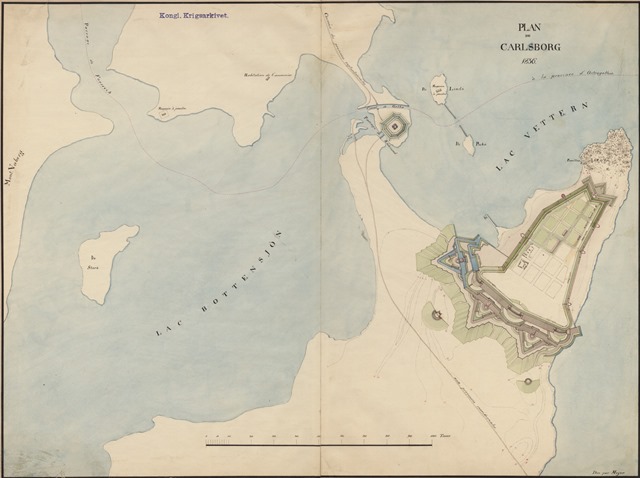 Old plan of the fort [from Wikipedia]

Carlsborg Fortress (Karlsborgs fästning) is situated on a peninsula at Karlsborg on the north-west shore of Lake Vättern, in the province of Västergötland. Construction of the fortress began in 1819, in order to realize a central defense idea adopted by the Swedish military after the Finnish and Napoleonic Wars. The site was chosen in connection with the construction of Göta Canal (providing good possibilities for transportation).

The central defense idea (…which did not last much longer than the 90 years it took to complete the fortress…) was that in the event of an attack against the kingdom,  the King, the Council, the Riksdag and central command functions would ensconce themselves in this fortress in the middle of the country. Even the gold reserves of the central bank of Sweden were to be safeguarded here in times of trouble.  It would serve as an alternative capital, so to speak. The fortress was meant to house a garrison of 6,000 enlisted men and an additional 8 to 10,000 people.

The Carlsborg fortress is one of northern Europe's largest buildings. The main building material is local limestone from a mountain on the east side of Lake Vättern. Construction was begun in 1819 on 100 hectares of land.  The walls were mostly complete in 1830 but due to great expense and reduced funding, it wasn't in operation until 1870, and not fully completed until 1909. After WW1, in 1918, the central defense idea was abandoned; but the fortress has continued to be used for military education purposes. Since 1935, the fortress is a Swedish “listed building”, and nowadays it also houses a fortress museum, open to the public.

As far as I can recall, I’ve never been to Karlsborg before, and I really had no concept beforehand of how HUGE the place is. My brother, on the other hand, knows the place “all too well”; as this is where once upon a time he did his military service – back in the early 1980s…

Between 1901 and 2010, Sweden had mandatory conscription (värnplikt) for men. In 2010, peace-time conscription was made dormant and at the same time the law was made gender-neutral. From January 2018, conscription is now to be reintroduced, but for a limited number of 19-year-olds (both men and women) compared to the 1900s. 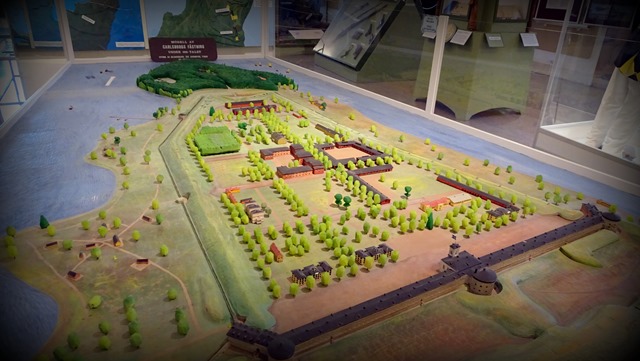 Model of the fortress on display inside the museum.
The main fortress building is said to be 678 m long and the longest heated building in Europe. 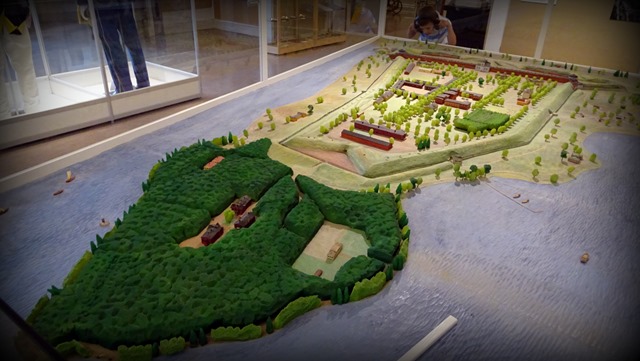 The model seen from the other end. 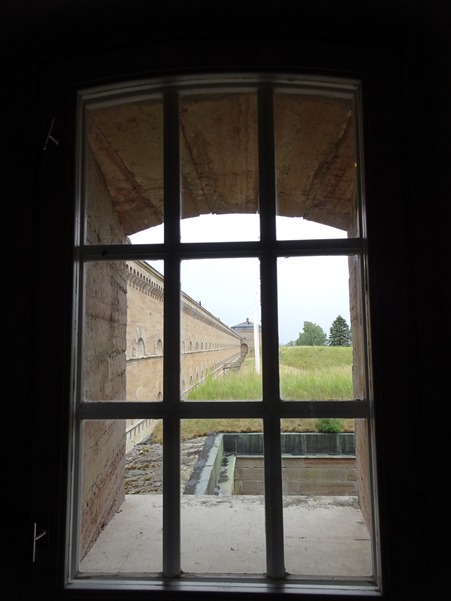 View from a window inside the fortress, looking along the wall to one side.

Even though I’ve now been there, I still have difficulties grasping the size of the place.

We drove into the fortress through the gate you can see in the postcard at the top. There is a traffic light because the gate itself is too narrow for cars to meet there. But once you’re inside, there’s plenty of space – and many various kinds of buildings.

As we arrived in the middle of a heavy rain shower, we started with darting straight into the museum rather than exploring the outdoors. 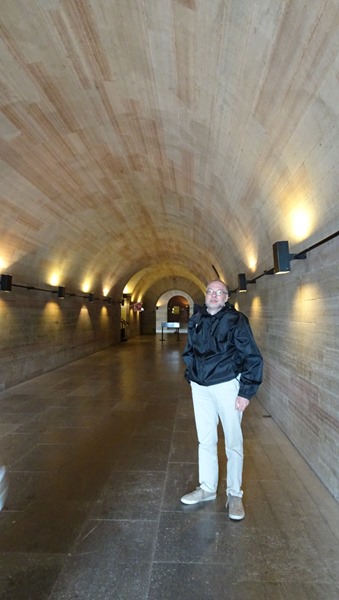 Going inside felt almost like going “underground” at first! 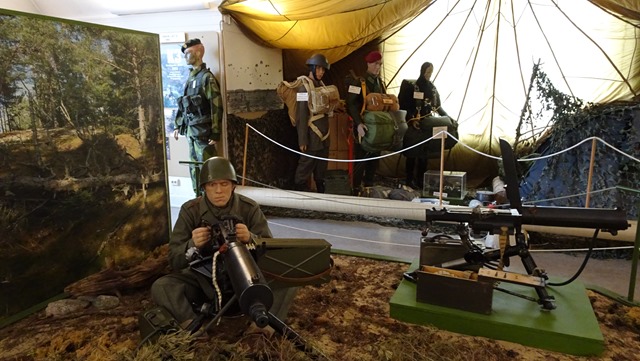 In the fortress museum, all kinds of military jobs are illustrated by life-size dolls. 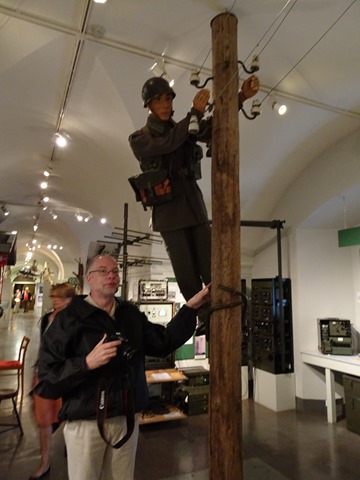 This was the kind of job my brother did in his military service. (Don’t ask me for details… Probably top secret anyway!…) 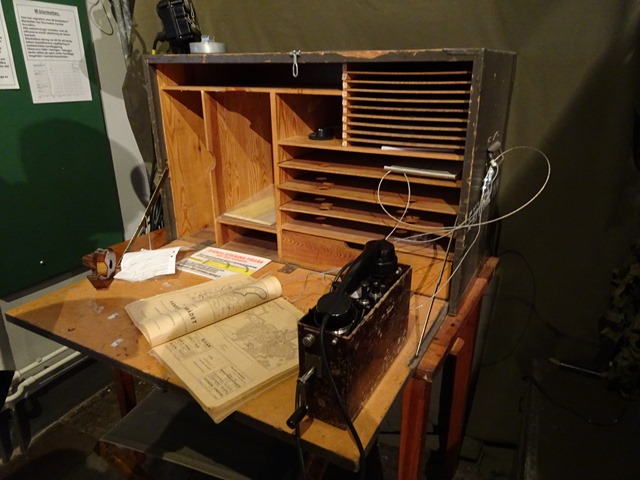 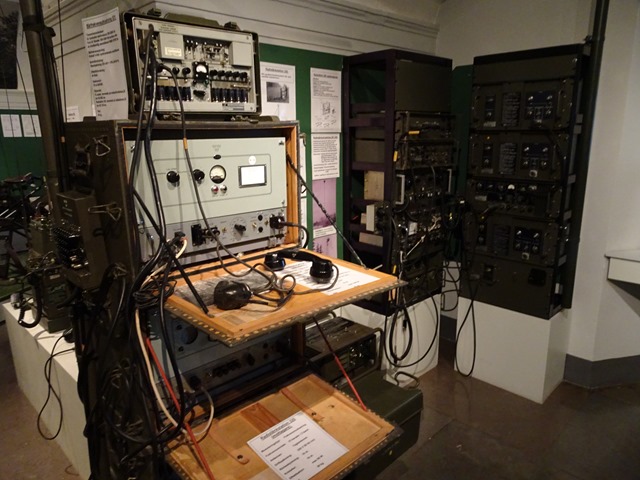 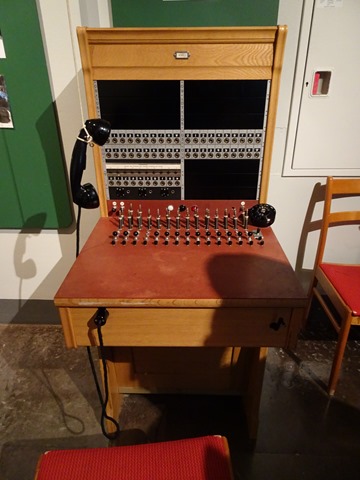 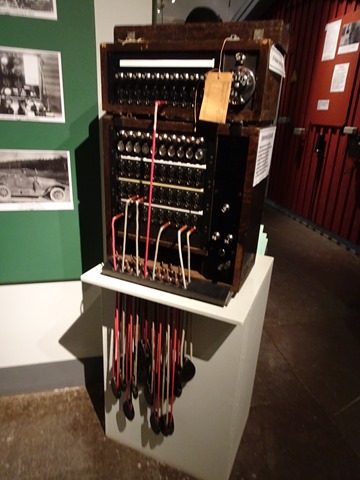 I never had to do any military service, but back in my earliest secretary jobs (mid 1970s) I too had a go at handling “this kind” of telephone exchange (or similar) now and then – i.e. with wires to plug in and out and (not) tie into knots. (It wasn’t my ordinary job but I sometimes had to help out temporarily at the switchboard.) 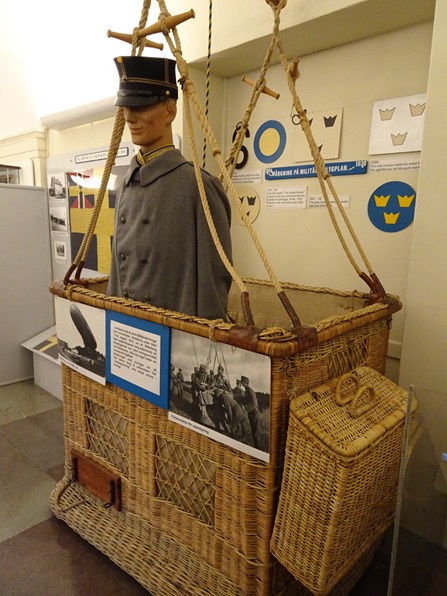 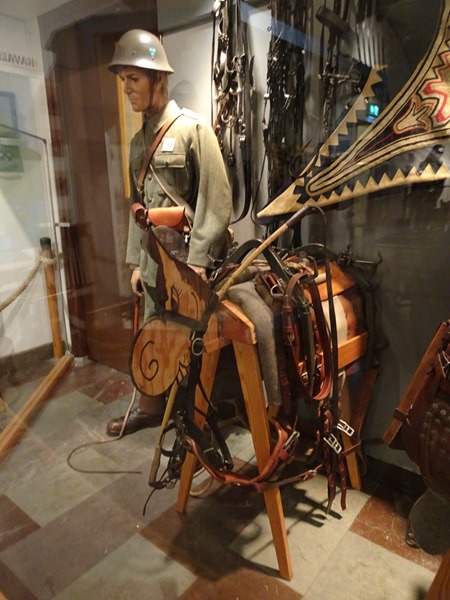 The cavalry is coming! (please note the horse…) 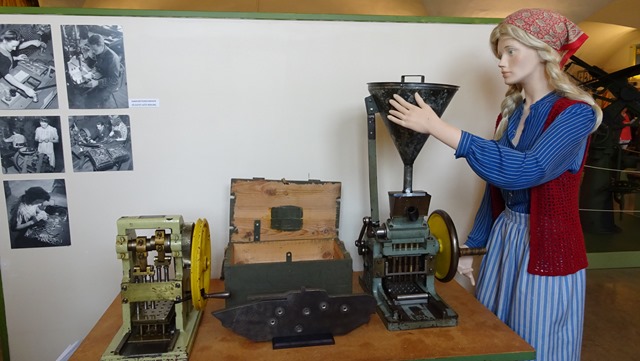 Women’s wartime jobs in the past: Providing ammuntion and food… 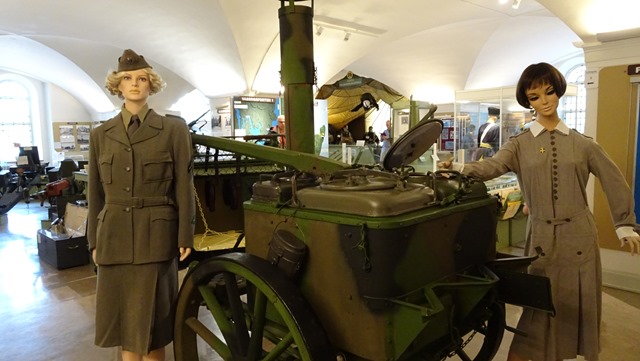 We also visited the Garrison Church (Garnisonskyrkan), which is located upstairs from the museum. The church can seat 700 people and was built to also be able to be used for the parliament in case of war. (The link takes you to the museum’s Swedish website with photos of the outside and the inside of the church from perspectives I did not manage to capture.) 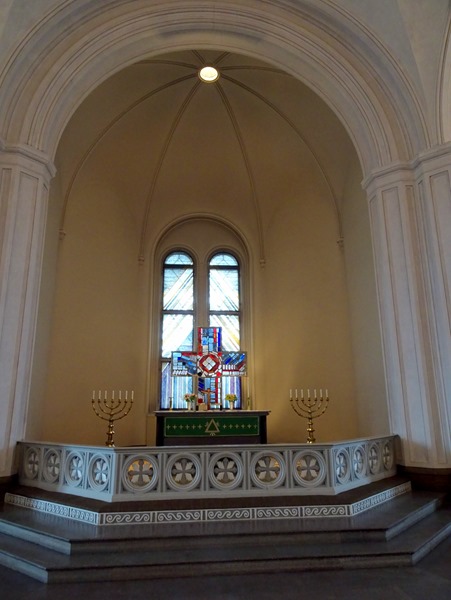 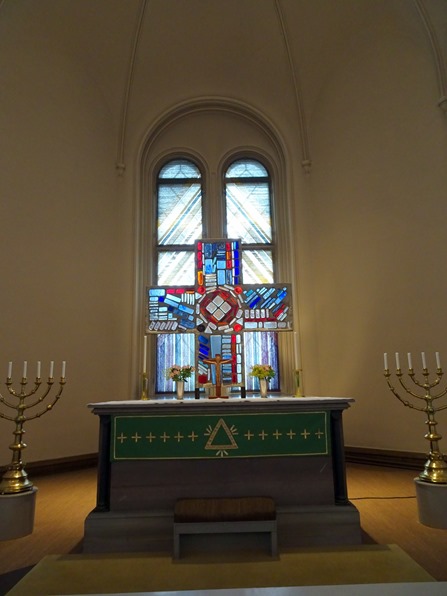 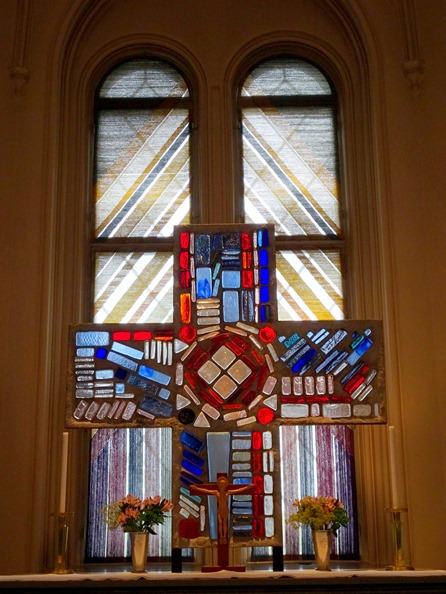 When we got back outdoors, it was still raining. Instead of a walk, we went for a random drive inside the fort. I snapped a few shots from the car, but I’m afraid I have very little idea what we’re looking at… Various buildings for accommodation and storage, I suppose! And the long straight road in the first image runs along the rampart, I think. 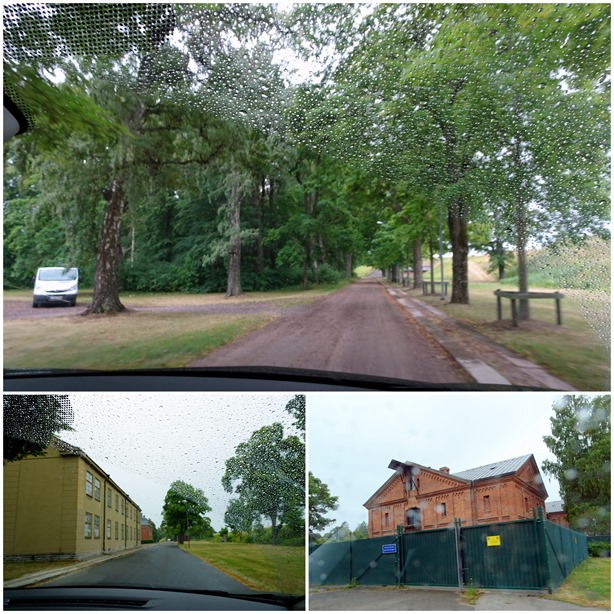 Eventually we managed to find our way to a cobbled square surrounded by wooden houses that looks more like a normal old town. But we’re still within the fort, mind! 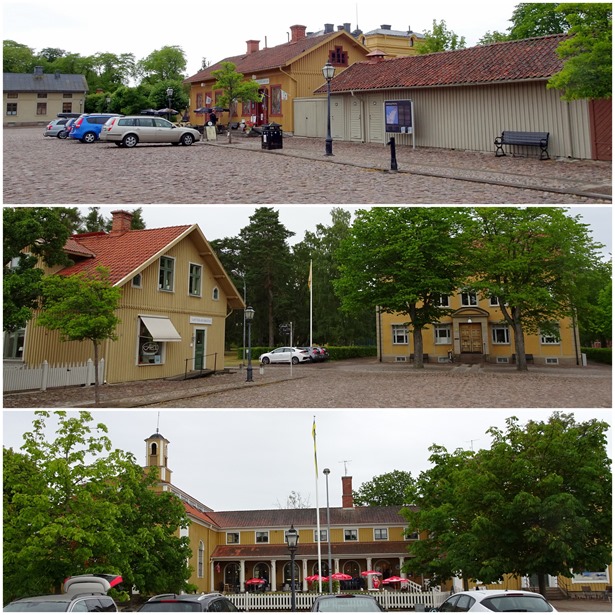 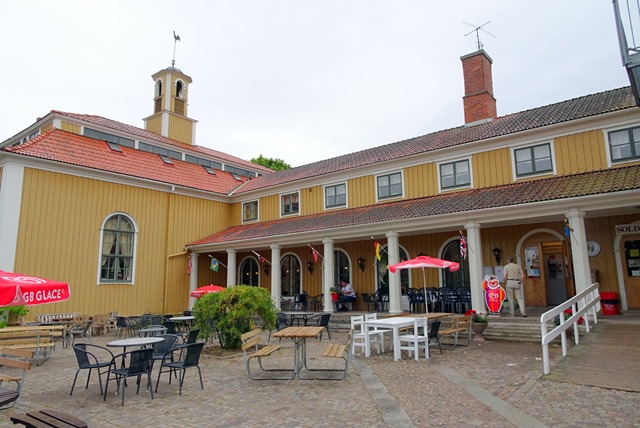 Before we left, we had tea/coffee here at the soldiers’ recreation centre / café. (Indoors, not outside!)

Posted by DawnTreader at 17:12