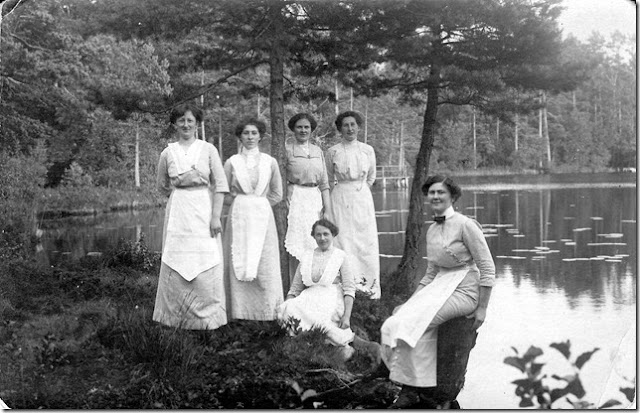 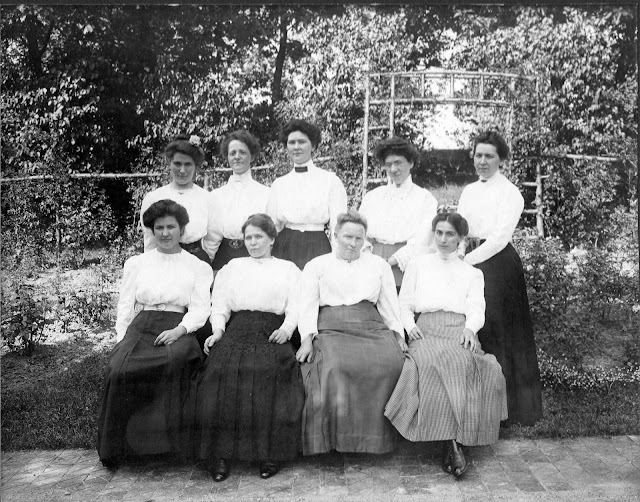 Since Easter, I have continued to work away at playing detective with the old postcards collected by my great-uncle Gustaf and his sister Gerda (many of those addressed to Gustaf also written by Gerda), during the years when the two of them both lived in America, c. 1902-1910. While Gustaf went to Pennsylvania to find work at sawmills and lumber yards (and ended up living most of the years in Galeton), Gerda went to Chicago, seeking employment as a maid. She changed addresses in Chicago a few times before she ended up working for the same family from some time in the autumn of 1906, and through at least 1910. This I know from addresses written on postcards, plus that (back in 2012) I managed to find both Gustaf and Gerda in the US Population Census of 1910.

The two photographs above, showing Gerda with a rather large team of other maids in what seems to be a countryside environment, have long puzzled me, though, as they don't seem to fit the Chicago city addresses.

This past week, I think I may have stumbled upon an answer, while deciphering two postcards sent by her to her brother in the summer of 1906.

To give you an idea of what I mean by "deciphering", here are the postcards: 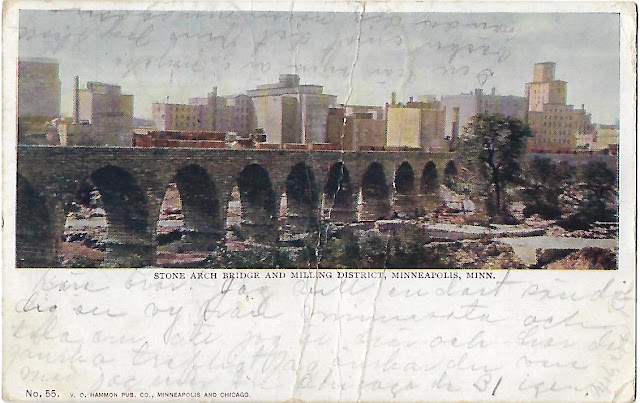 Yes. Gerda has this rather unfortunate tendency to write her messages (often in pencil) all over, around and upside-down on the front of the cards... (The back in those days often reserved for the address only.) She also often used cards with images nothing to do with where she sent them from; and most of the time she starts off with standard phrases (I wonder how you are / I am having a good time / I am waiting to hear from you / I will write a letter soon, etc.) - but then, just when she's running out of space, she remembers something more important she wanted to add, and squeezes that in right at the end, along the edge, upside-down, or in really minuscule writing - and 115 years later, it has faded into obscurity... (To be fair, I don't suppose she ever considered the possibility that her baby half-sister's granddaughter might want to read the cards in 2021...) Moreover, somewhere along the years, some eager stamp collector removed the stamps from all these postcards, which often makes the postmarks/dates unreadable as well!

Add to that a few old photographs with no notes or dates attached.

However, most of the postcards seem to have been sorted by year into Gustaf's postcard album. So on my blog Greetings from the Past, I am trying (periodically, now and then, since 2012) to go through them in order, one card at a time, drawing my conclusions the best I can from what I know so far - but prepared to change my theories along the way, when new pieces of information turn up.

The card with the view of Cave Hill, Belfast, Ireland, was sent by Gerda from Chicago on June 12, 1906. Upside-down over the hill, the most important piece of information on the card is: I am leaving my place here in 2 weeks. ... However, she does not reveal what her plans for the future are, only says she'll write again to give him her new address. (If she did, that was probably in a letter. And I have none of those, only postcards.)

The next card from her is the one with a view from Minneapolis, Minnesota. That was sent from New London, Minnesota, on Aug 16, 1906, and reads: Just sending you a view from Minnesota to tell you that I am here and having a rather good time. I wish you were here. I'll be going back to Chicago on the 31st. / This view is not very beautiful but there are some, I'll send you another one later.

I looked up New London, and found that nowadays they call themselves "The City on the Pond" and "Gateway to the Glacial Lakes". This led my thoughts to that photo of Gerda with a team of other girls dressed in some kind of maids' uniform, by a lake. (G. is the one sitting on a tree stump on the right in that photo. And on the other, more formal group photo, she is in the middle of the back row.) Judging by the way they are dressed, with the long skirts etc, I'd also say 1906 feels just about right.

Now knowing that Gerda left one employment at the end of June, 1906, and probably did not start her next one until a bit later in the autumn - I'm thinking that this gives her a couple of summer months in 1906 to travel up to Minnesota to work for a while at some kind of summer hotel or lodging-house there. A sort of "working holiday", away from the big city of Chicago.

No brooms to be seen in the hands of the ladies in my photos; but I'm linking to another "team of women" at Sepia Saturday 565

Posted by DawnTreader at 13:44