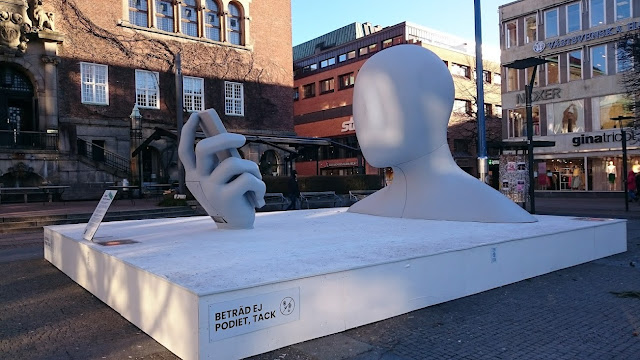 Yesterday I went into town for a haircut; and after that, a couple of minor errands took me to the main square. When I got there, I realized that I obviously hadn't been as far into the city centre as the square since before New Year - and before the arrival of this (temporary) sculpture, called 'Faces', which was put up for the city's New Year Eve celebrations. I read about in the local paper back then, but since then had forgotten all about it. Once I did get to the square, it was kind of hard to ignore - even though it was currently in "anonymous" mode. The sign next to it informed me that it only shows its face(s) between 16-23 (i.e. after dark). I'm very rarely in town at that time of day myself, though - at least in winter. And yesterday, I definitely did not feel like hanging around the square for three more hours just to  see the sculpture "in action"...
However, scanning the QR code at home from my photo, I discovered that you can have a look at all the faces and information about the artists at https://artscape.se/faces/. 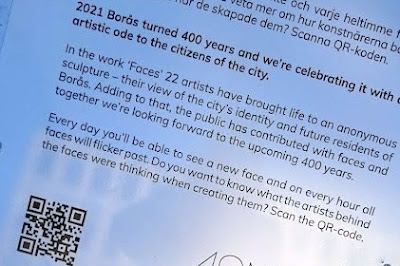 Here's the face for today (18 January), copied from that website: 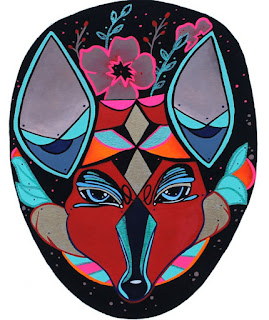 Felicia Gabaladons gathers inspiration from nature, her native American heritage and it’s symbols and brings it to life with bold palettes and symmetric patterns. She’s based in Oakland, California.

“The fox is often seen as a symbol of intelligence as well as playfulness. Combined with an artistic expression inspired by textile art and modern indigenous art from the U.S. tribes, it connects Borås with other cultures.”

Linking to Our World Tuesday
Posted by DawnTreader at 16:30