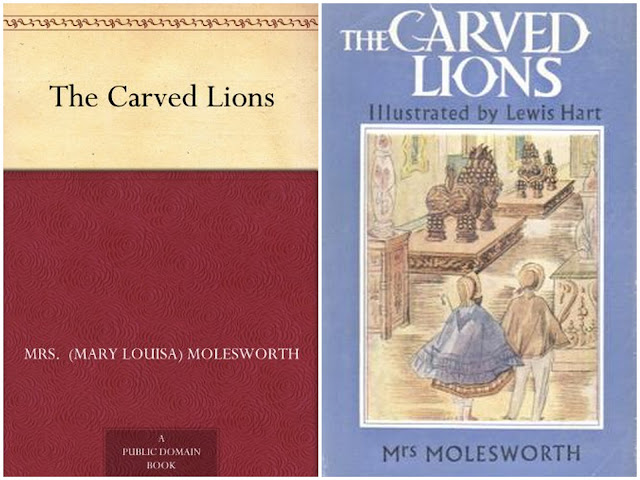 Recently, Meike (Librarian) blogged about another title - Christmas Tree Land - by Mrs Molesworth (1839-1921) - a classic English author of children's stories, previously unknown to me. Meike's review of that book made me wonder a bit if maybe her works could have inspired C.S. Lewis when writing his Narnia series. So I looked up some more of her titles, among which I found The Carved Lions (in the public domain and free for Kindle). Having read it, I'm still wondering... If C.S. Lewis did read this book in his childhood (and he could have - he was born in 1898), I suspect he may have felt (like I do) that there were elements in it that could have made it a good fantasy book - but weren't (in that respect) quite used to their full potential...

Reading it 125+ years after it was written, and as an adult, to me the the story feels "uneven". The narrator in the book is an old woman looking back on her childhood (so the events meant to have occurred in the early 19th century rather than towards the end of the same century). Geraldine and her brother were quite happy living with their parents in a village. They were not exactly poor, but also not rich. ("It never entered my head that there was anything to be ashamed of in living in a small house and having only two servants.") Her brother (a couple of years older) went to school but Geraldine was home-schooled by her mother. Sometimes she wished she could go to school to.

One of both children's favourite things was to accompany their mother when she had some errands in the village. At the entrance of one shop there were two huge carved lions, looking very life-like. Geraldine and her brother used to imagine (or pretend) that these could come alive, and carry them off on adventures.

"A little way in from the front entrance to the shop --- stood a pair of huge lions carved in very dark, almost black, wood. They were nearly, if not quite, as large as life ---"

Then suddenly there is a big change in their lives. The children's father gets a job abroad (which it seems he has to take for financial reasons). His wife has to go with him; but for reasons to do with climate and whatever, they can't take the children.

So the children are both sent to boarding schools - Geraldine to one for girls in the same village where they lived. Apart from her parents going away, she is actually kind of looking forward to this - hoping to make some new friends.  But the school turns out a huge disappointment to her. And here the story goes off into lengthy descriptions of the school, the teachers, and her growing unhappiness. Until one day she runs away, in the hope of finding someone who might be able to help her get news of her parents. It turns out she doesn't remember the streets of the village as well as she thought, so she gets lost - but eventually ends up at the shop with the lions, so exhausted that she falls asleep next to one of those.

And then the lions come alive, and wonderful things start happening... Or... do they?
(Spoiler alert for the next paragraph)

Next thing, Geraldine wakes up, and finds herself in a strange bed, surrounded by faces she does not know. It turns out the owner of the shop found her sleeping next to the lion, and had taken her in. She has contracted a bad cold from being out in bad weather, and has to stay in bed for a while. However, it all turns out for the best. Various misunderstandings get sorted out, and she ends up not having to go back to the school, but gets to stay with nice people (including a girl her own age who also likes the carved lions); until eventually her parents come back from abroad.

The book is quite short (79 pages). It has been called the author's masterpiece by some; but as I already said, to me it feels uneven, with some parts of it full of details, but others only very hastily sketched, and the fantasy parts not allowed to mix too much with "reality".

The idea of the carved lions coming alive and letting the children ride on their backs to a faraway place still reminds me of Narnia, though. ;-)

(Remains to be seen how well I'll remember the book in a couple of years or so - that's usually the best way to tell the quality of a story in the long run!)

Posted by DawnTreader at 15:29