'Something to Hide' (Book Review) 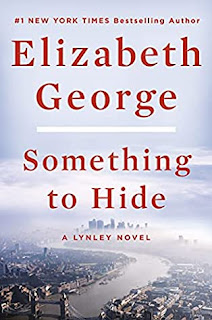 A black female police detective, Teo Bontempi, is found unconscious in her home. She is taken to hospital but her life cannot be saved. The autopsy reveals that she had been given a blow to the head, and a murder investigation is started. She had been working on a special task force to do with FGM – female genital mutilation (female circumcision). Acting Detective Superintendent Thomas Lynley is assigned to the case, together with Detective Sergeants Barbara Havers and Winston Nkata.

Parallel to the murder case, we're introduced to a Nigerian family, husband and wife (Monifa) with two children, a teenage boy (Tani) and a younger daughter (Simisola). The father wants to keep the old traditions from his native country, and against his son's wishes, he is making arrangements for him to marry a young girl in Nigeria. He also starts making similar arrangements for his own daughter, even though Simi is still just a child. Those arrangements include FGM – female genital mutilation (female circumcision). Husband and wife have some different opinions about this ritual though. Monifa can't really see a way to stop her husband's plans – but she has her own ideas about how deal with it. At the same time, Tani is prepared to do everything he can to protect his little sister - from both their parents...

Lynley's old friends Simon and Deborah St James (from several previous books in the series) manage to get involved in this case (or these cases) as well. Deborah is a photographer, and as such working on a film/photo project with an organization working against FGM and domestic violence. Through this project she gets to know both victims and helpers – some of whom might be involved (one way or another) in the murder case as well.

As usual, the detectives' personal lives play a role in the story too. We get to know a bit more about Nkata's background and family (I can't recall having heard all that much about his family before, but I may have forgotten). Lynley is (still) struggling in his relationship with Dairdre, and also still processing the loss of his wife Helen (who was murdered I forget how many books ago). Although his own life is vastly different from the case he is working on now, there are still certain parallels that can be drawn when it comes to relationships and what men/women expect from each other. As for Barbara Havers, she too is still struggling with what other people seem to expect from her.

There are a lot of loose ends to either untangle or tie together in this book; which takes the author some 700 pages to sort out. I did feel from time to time that there were a few too many repetitions, and that it could all have been wrapped up quicker. On the other hand, I suppose the length of the novel does reflect the complications involved: cultural differences, unclear identities, missing paperwork and evidence, wrong conclusions, need for secrecy vs bureaucracy, mistrust of authorities, etc.

All in all, the book deals with an important topic, and the plot is quite interesting. But I can't help getting the feeling that after 20+ books, the author has a bit of a struggle sometimes with how to proceed with the personal lives of the detectives...

Posted by DawnTreader at 19:54