This week started kind of abruptly for me. On Sunday at lunch I broke a tooth. It was the same tooth that also broke twice last summer, and both times I was told it was tricky to fix, as the damage went deep. For the same reason, it may also be tricky to put a crown on it, though. So when I felt part of the filling had given way now, I feared "the worst"...

In Swedish we have a saying "ha tur i oturen" which is difficult to translate to English in an equally short catchy phrase. It basically means "to have a bit of good luck in the midst of bad luck". The first time I broke that tooth (not the very first time, but the first time last year) was on Midsummer Eve (a Friday). I had to get through the rest of that weekend on foods like mashed bananas and yogurt etc, and call the dentist first thing on Monday - when I also had a scheduled appointment for my 2nd covid jab later the same day. Luckily, the dentist managed to fit me in early though, and also to fix the tooth; and I was able keep my afternoon appointment for the covid jab as well. This was also the last week before the dentist closed for summer holidays in July, so in that respect I was also "lucky" that it happened when it did, rather than in July.

The next time that tooth broke (another corner of it) was in August. Then it happened on a Thursday and I had to call first thing on Friday morning, knowing they would be closing early that day. It also turned out my own dentist wasn't there. But luckily, her colleague managed to squeeze me in at the very end of her closing-early day. And again, managed to fix the tooth.

And now, the third time, it happened on the last Sunday of the Christmas holiday season. I decided to wait to call until an hour after they opened on Monday morning. With covid numbers sky-rocketing after Christmas, I guessed the dentist would be likely to get a few cancellations first thing at the start of the first week after the holiday season... I may have been right about that, because when I called at 9 am, the nurse was able to offer me three choices the same day. The first one was at 10:20. That suited me fine... I might not even have to reschedule my booking of the laundry room (starting at 12). The streets were icy, but the weather was okay, even offering a glimpse of sun again after a weekend of dull snow/slush/grey. I was able to walk into town without hurry; the dentist once again managed to do miracles (even if still not able to make any promises how long it may last) and I did get back home in time to get my laundry done as planned. (After  all that, I was feeling pretty exhausted in the late afternoon, though.)

Two photos snapped with my phone yesterday, on my way to and from the dentist's. The river calm as a mirror, not really reflecting all my "drama" at all! 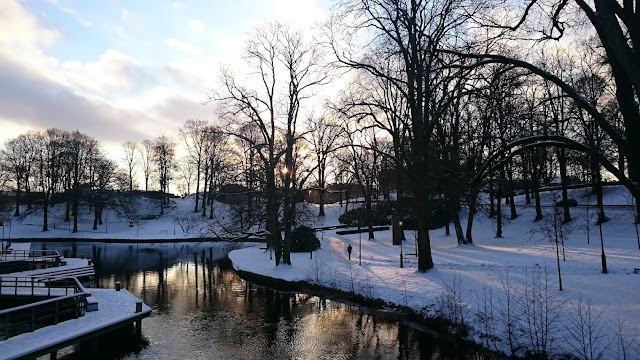 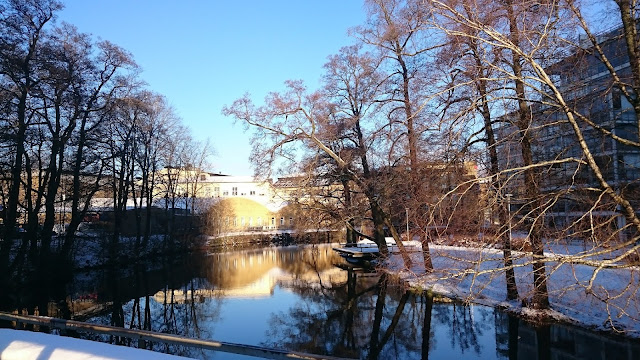 Today, we're back to grey. I've been for a short walk to the recycling bins with some stuff + popped into the small neighbourhood shop for some bananas and tomatoes on the way back. And I packed a bunch of Santas/elves/gnomes back into their box for hibernation until next Christmas. What I did with the rest of the day I can't really say!

Tomorrow and the next few days it's supposed to get warmer once again, and rainy. I'm hoping for all the knobbly ice on the streets to be washed away before the next round of snow (which is likely to happen at some point as we're still only in the beginning of January). Tomorrow I'll probably be staying in, packing some more Christmas things to go down to the basement.

"Luck is the phenomenon and belief that defines the experience of notably positive, negative, or improbable events. The naturalistic interpretation is that positive and negative events may happen at any time, both due to random and non-random natural and artificial processes, and that even improbable events can happen by random chance. In this view, the epithet "lucky" or "unlucky" is a descriptive label that refers to an event's positivity, negativity, or improbability." [Wikipedia]