Another Week Gone By 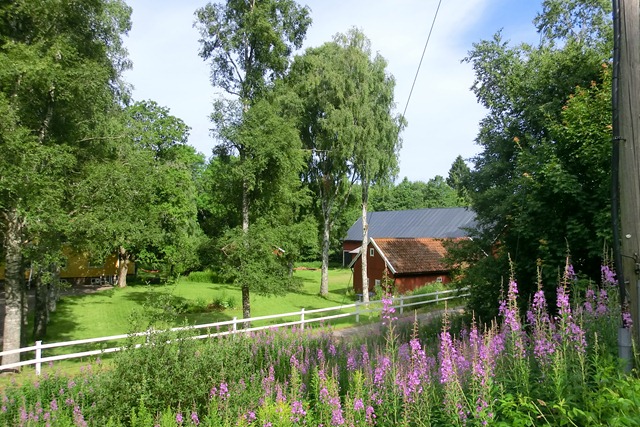 Countryside view for Jan’s Straight Out of the Camera Sunday

The weather has been generally unreliable this week. The forecasts for Thursday however weren’t too bad, and as my own body wasn’t complaining too much either when I got out of bed in the morning, it seemed the best choice this week for an “outing”.

So I took an early bus out of town and got off not far from our House. But I did not go straight to the House; in fact I set off for a walk in the opposite direction, to the church and cemetery. The problem is that the bus does not pass by the church; which is why I very rarely get there on my own.

The position of our House, the church and the center of the village could be drawn as each being in their own corner of a triangle; each side measuring (roughly) ~1500 m (~1 English mile). I don’t think I’ve actually ever walked the whole triangle before. At least not in the last decade or so. But I did now. 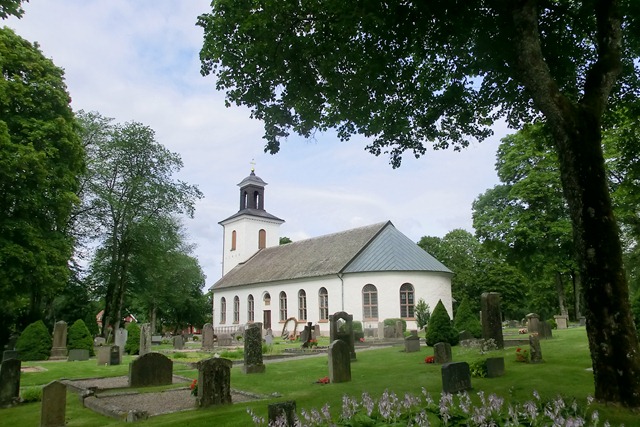 I wanted to get to the cemetery because I wanted to make another “round” among the family graves for which my dad had the official responsibility, before we have to decide what to do about them all. (My grandmother had 11 [half-]siblings! Not all of their graves were in dad’s care, but some.) 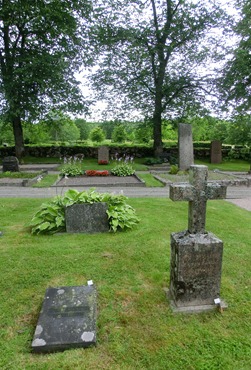 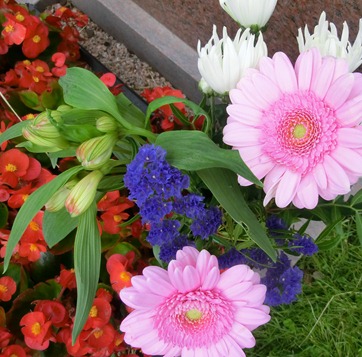 The oldest and the newest. In the left hand corner to the left:
The grave of my paternal grandfather’s maternal grandparents!
To the right: I put a bouquet of fresh flowers on my parents’ grave. 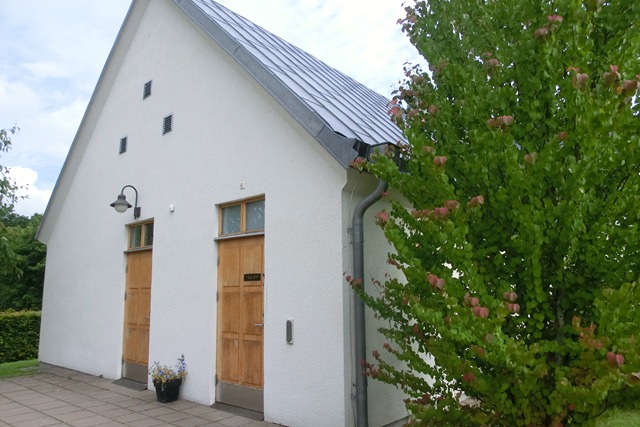 Essential ‘public convenience’ facilities… Had I not known it was there, I wouldn’t have dared venture out on this long walk in the first place!

After making my round I sat down for a while on a park bench and checked emails on my new phone!

Then I decided to take the long route back to the House, i.e. via the village – because I also needed to buy some food. 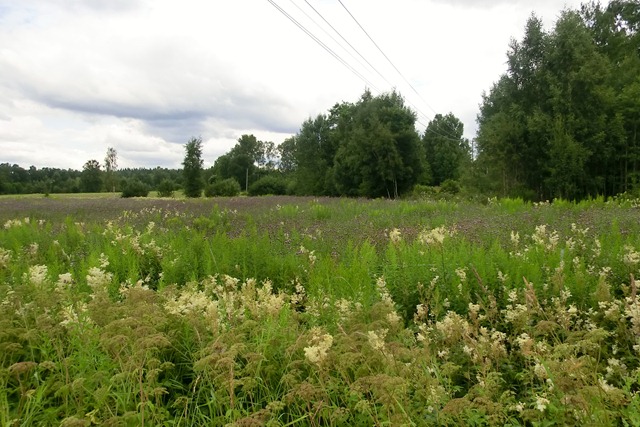 The purple flowers out in the field are thistles! I couldn’t help looking about for Eeyore… (You know – Pooh’s friend.) Thistles are his favourite food. Not mine though, so I had to continue! 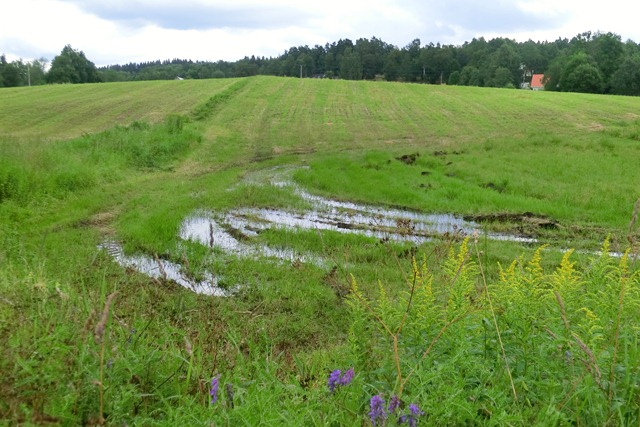 It’s been raining quite a lot lately! 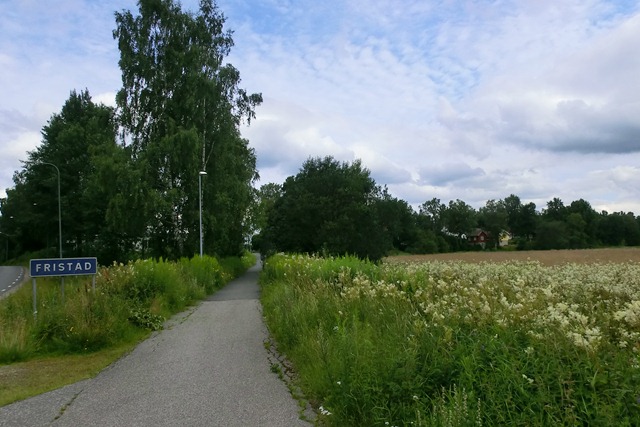 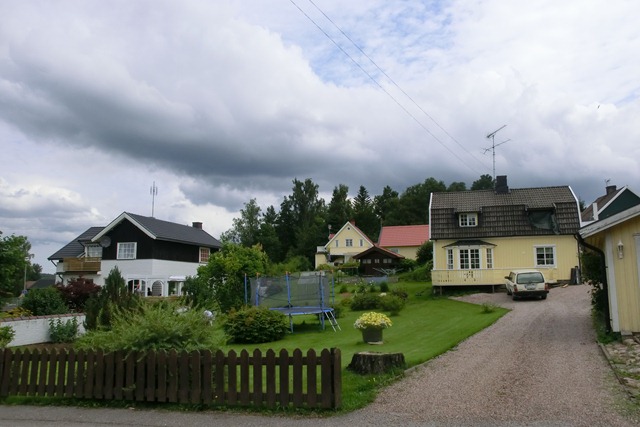 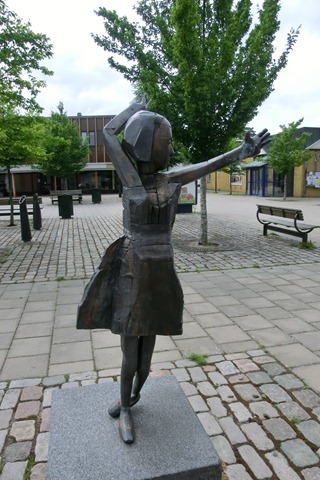 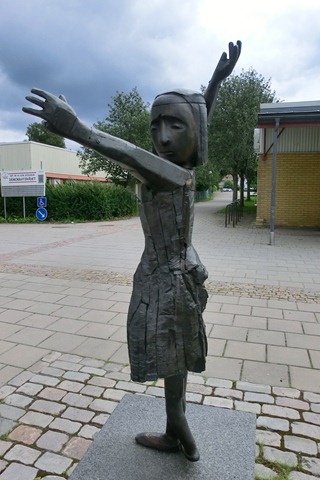 This is how happy you get when you reach the village square after a long walk! (Sculpture called Dancing Girl)

After a tour of the supermarket/grocery store I set out again for the last side of the triangle, back to the House.

My legs were getting tired now so had to sit down and rest a while again here at these old cottages (looked after by the local history society). Passed some other interesting buildings on the way too, but I might get back to those in another blog post. 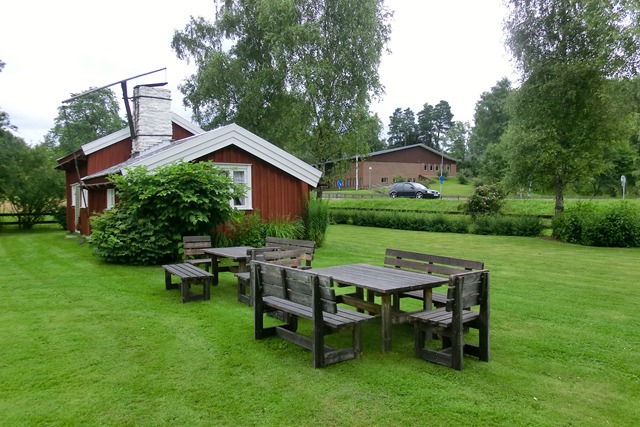 Getting really hungry by now… But not really wanting to eat with my fingers, I got up again after a short rest and continued… 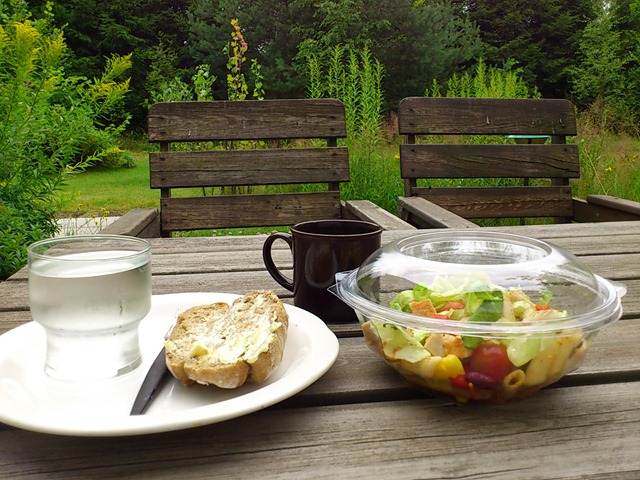 Finally back “home” at the House! Luckily they had a salad bar in the grocery store; perfect for a summer lunch. And at the House I had what else I needed. The last photo here was taken with my mobile phone, by the way! (The previous ones with my camera.)

Posted by DawnTreader at 15:07