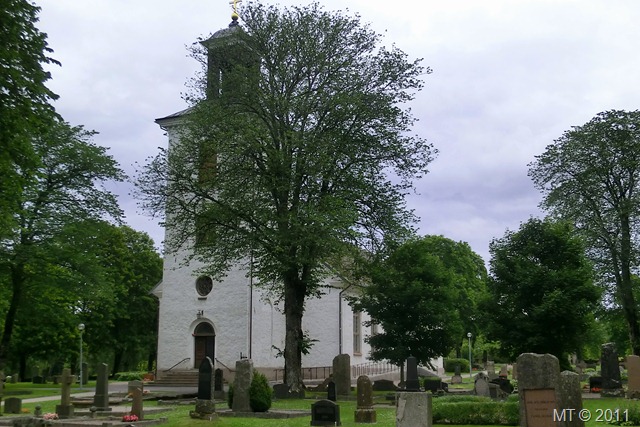 It’s Thursday evening, and the rain has been pouring down since early afternoon. Never mind. I’m thankful that it was not raining yesterday. We had good weather for the funeral  - neither wet nor too hot. And everything else went according to plan as well.

I’ve just been emptying the memory card from my camera into the computer. For now I’ll just share two pictures with you. The first one (above) is of the church where the funeral took place. Several ancestors on my father’s side are buried in the cemetery there, and now also both of my parents. 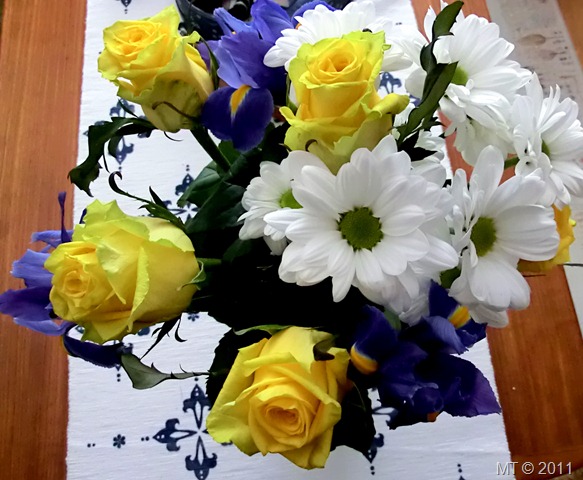 The second photo is of a bouquet of flowers of the same kind that I chose for the coffin and grave decorations. I ordered an extra bouquet for the memorial gathering after the service. Afterwards I took it home with me. I did the same thing at mum’s funeral. Somehow I find it helpful – can’t quite explain why.

Some people find lots of flowers at a funeral to be a bit of a waste. Myself I’m thankful for the flowers making such a bold contrast to sadness and darkness of mind. (For the same reason I’m also thankful that both of my parents’ funerals came to be held in the summer rather than in the winter.)

I’m also thankful for the people who came to pay their last respects by attending the funeral; and for those of my own friends who I know have been “with me” from a distance by sending kind thoughts by cards, emails and blog comments. Three of the cards I received by regular post actually came from far-away friends I’ve made in the blog world and have never met face to face. Isn’t that amazing? You know who you are – a special thanks to each of you. It was very comforting to receive your ‘tangible’ greetings.

Posted by DawnTreader at 22:21