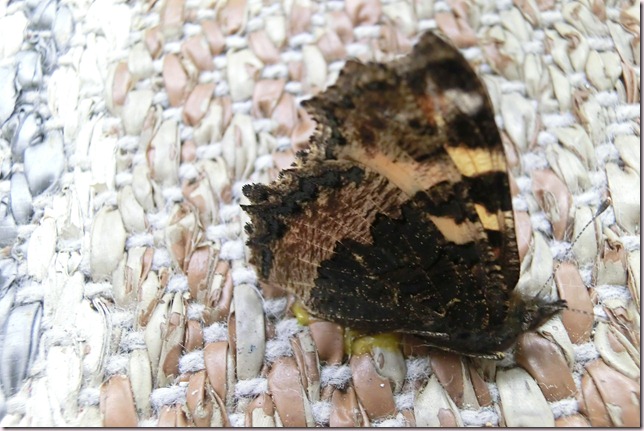 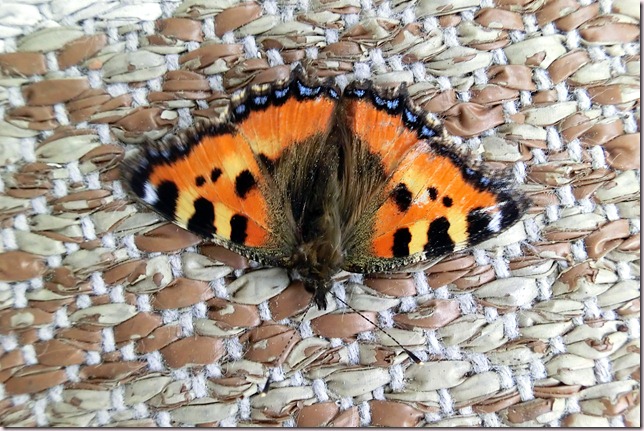 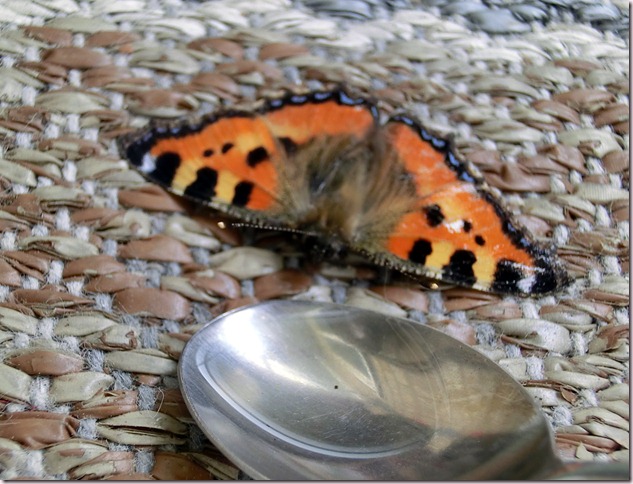 or watch it here: http://youtu.be/3luDNXGiIOE

Last night when I went out on the balcony to take in the cushion from the deck chair for the night, I discovered I had a visitor. A Small Tortoiseshell butterfly had parked itself on the floor. I went in to fetch the camera, and when I came back it was still there. It folded its wings as I got close but didn’t fly off. A while later it spread its wings, and seemed to have decided to stay the night.

It kept its wings spread all evening. It did not seem quite healthy, but it did still twitch a bit and move its antennae now and then. So I let it be. I really have very little idea of butterflies’ sleeping habits, even if (as far as I’ve noticed) none have chosen to stay on my balcony before. If they come to visit in the daytime, they usually don’t stay more than a few seconds on my flowers.

So when I got up this morning, I was curious to see if it was still there. It was – in the exact same position as I last saw it, and not moving. I thought it had probably died. It did not react to me approaching it with the camera again. But I decided to do a bit of internet research before I decided on any drastic burial ritual.

From Wikipedia I learned that

The adult is striking, with its dark body and red and yellow wings, which have a row of blue dots around the rear edge. However the underwings are dull, which helps to conceal stationary or hibernating individuals. When threatened, resting individuals rapidly open their wings, presenting the dramatic display of colours. This can frighten away young or inexperienced birds.

Wiki says nothing, however, about butterflies just lying still on the floor for more than 12 hours with its wings spread.

Then I came upon some stories about people rescuing dying butterflies by feeding them sugar-water.

So to test if there was still life in the butterfly, I made some honey-water, and poured out a teaspoon-full just in front of it. This did activate the butterfly. Although it was still not moving its wings at all, it was definitely not dead. From the movements of head and antennae I would say it appreciated the breakfast. So I’ve kept on feeding it a few drops now and then (not quite knowing how much just disappears down through the plastic carpet, nor how much a butterfly eats!) But it is still not moving its wings.

Help. Any butterfly experts out there??? Now what do I do?

With any smaller insect I’d just put it out of it’s (supposed) misery and think no more about it. But a colourful butterfly just sitting there and thankfully drinking honey-water when I serve it…?

I hope the video works. It’s the first video I’ve ever managed to upload to YouTube!

Posted by DawnTreader at 13:05