A Place of Worship 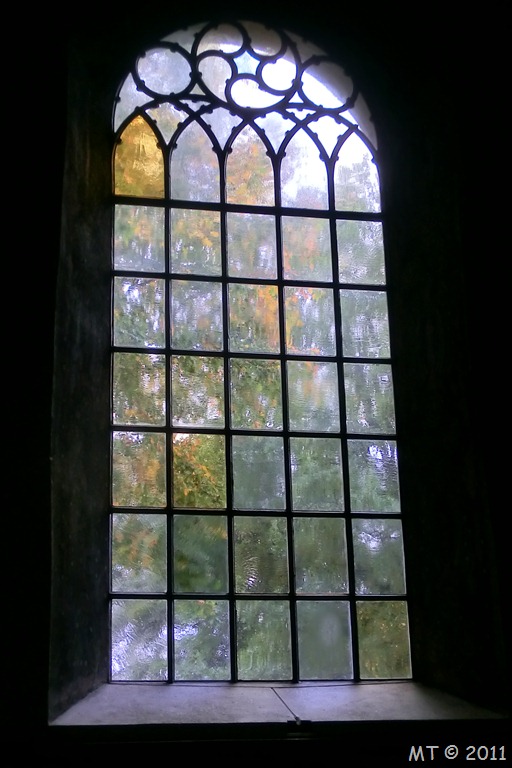 This morning I intended to go to a church service. At least I half intended to. What makes me doubt the full sincerity of my own intention is that I allowed myself to “get lost in the fog” on the way there. When the church bells rang, I was still embarrassingly far away from the church. I should either have started out at least half an hour earlier, or left the camera at home… And really I ought to know that by now! 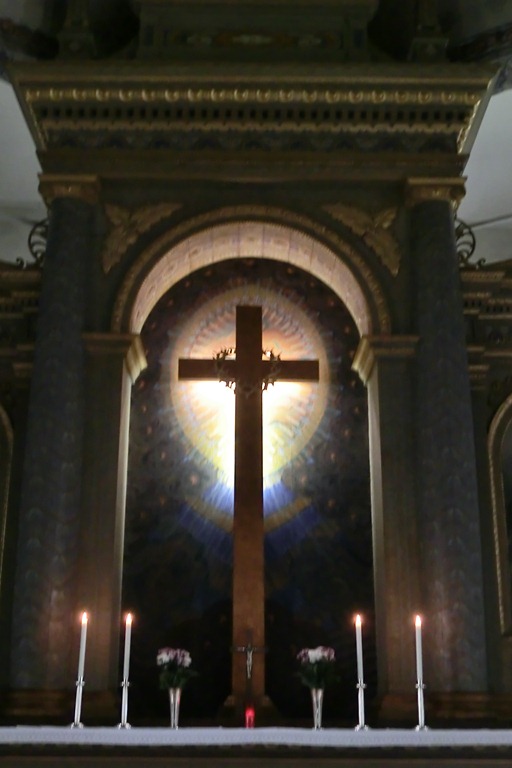 So I did not go to church today. I did, however, look in there yesterday, when I was just passing by on another stroll in the fog, but found the church to be open to visitors (no service going on). 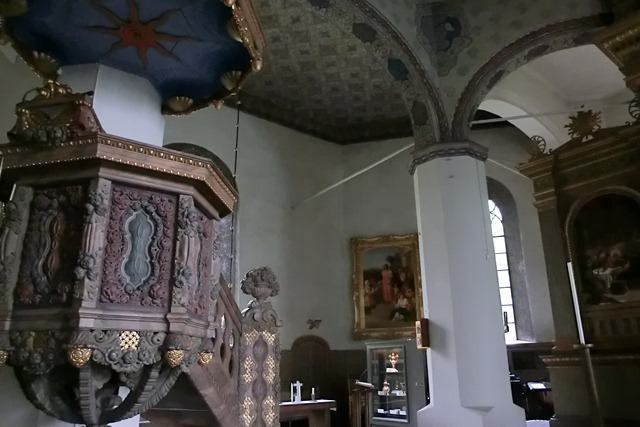 On the spot where this church stands, services have been held “as long as the Lord’s gospels have been known in the region” (quoted from a brochure I picked up on my visit). As early as the 13th century, there was a stone church on this spot, possibly preceded by a wooden one before that. The rapid growth of the town demanded a larger church, which was completed in 1669, with the tower added in 1681. The same year, the church was destroyed in a town fire. It was rebuilt in 1690, devastated again in a second town fire in 1727; again rebuilt, and again damaged in a third fire in 1822. Since then no more big fires, but several restorations – the last one just recently. 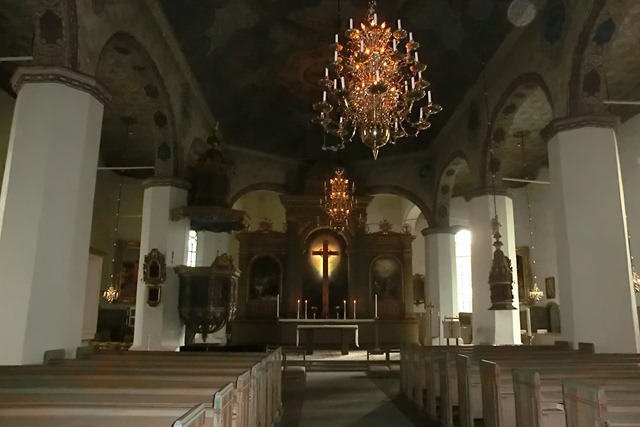 The church is 46 m long, and 26,5 m wide. The roof is supported by fifteen pillars, all somewhat unsymmetrical. 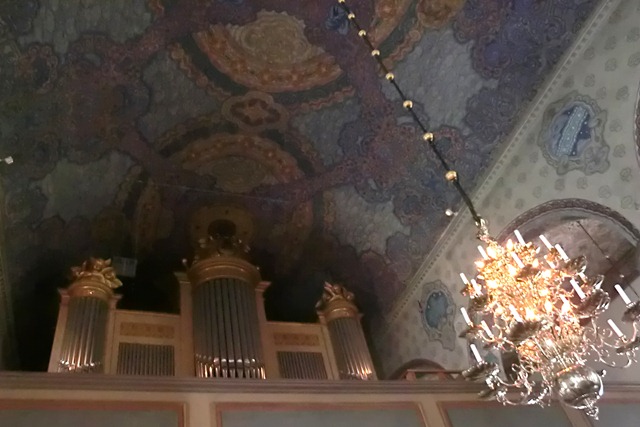 The ceiling is made of wood and beautifully painted. 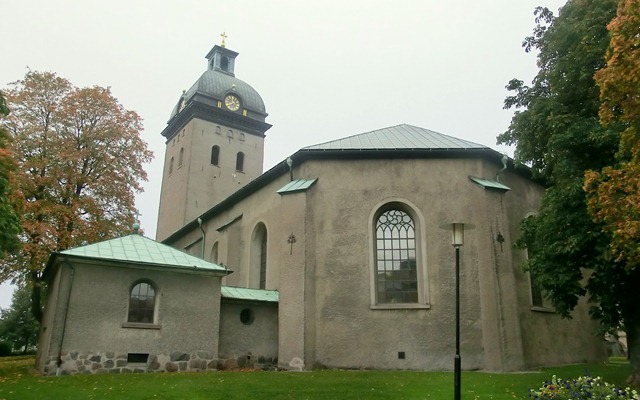 The tower is 35 m high, the tower head not included.
The vestry was added around 1940. 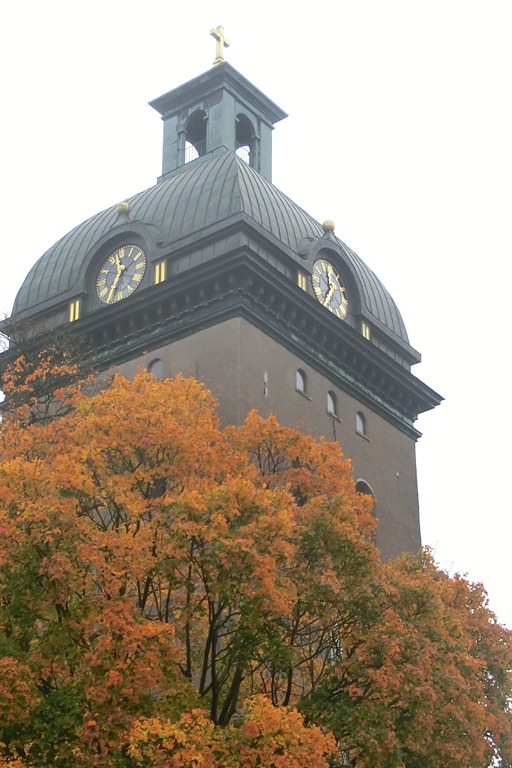 Today, not wanting to slip in a quarter of an hour late, I ended up just paying my general respects in Nature’s cathedral outside. 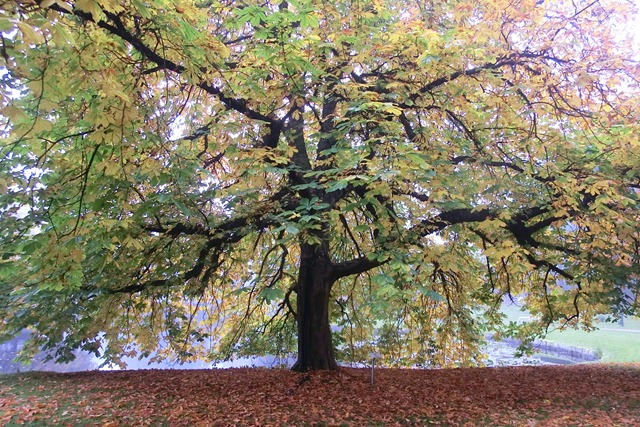 “The God who made the world and everything in it is the Lord of heaven and earth and does not live in temples built by human hands.  And he is not served by human hands, as if he needed anything. Rather, he himself gives everyone life and breath and everything else.”
~ Acts 17:24-25 NIV (Paul speaking to the people of Athens) ~

Posted by DawnTreader at 15:08