In the mail today I received a big envelope with the municipal authorities’ logo, addressed to me. Inside I found two forwarded envelopes from two different sources. No extra note attached.

One was a letter from the bank re my father’s bank accounts, dated back in early July (i.e. a few weeks after his death). For some odd reason this had been sent to the nursing home where he lived the last year of his life, instead of to me. While he lived, all official mail including bank statements were sent directly to my address. Where’s the logic?? And why the delay??

What puzzled me even more was the other letter, though, because this contained a bill and payment forms for the rent for his flat at the nursing home marked October, November and December. But… but… but…? we emptied that flat before the end of July, and no one had been demanding rent for August and September; so why now??

So I got on the phone to try and sort that out. First person could not sort it out, so she transferred me to someone else. This person too was as confused as I was. She said it was impossible. According to their computers, everything was in order, there was no remaining debt or contract in my father’s name.

Then, suddenly, it dawned on me that the bills I held in my hand were dated 2010, not 2011. They were last year’s bills. That means they were also the reason why last autumn (as I now recalled), I had to phone three months in a row and ask why we had not received a bill/payment form for the rent, and each time they had to send me an extra one. Not until the third time was I informed that their policy was to send three bills at a time. (So it was really only one letter that had got “lost” and not three.)

So. I guess someone in an anonymous office at the service center/nursing home just had a bit of an autumn-cleaning… finally getting to the bottom of that pile on their desk that had been building up for a year! (Sigh!) 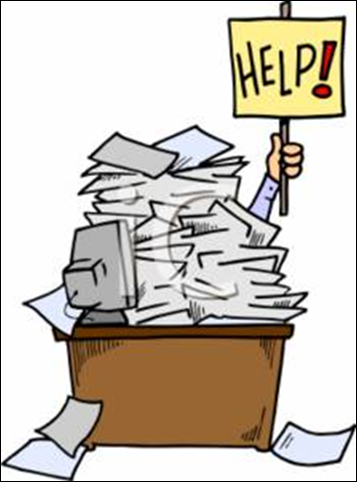 Posted by DawnTreader at 18:10