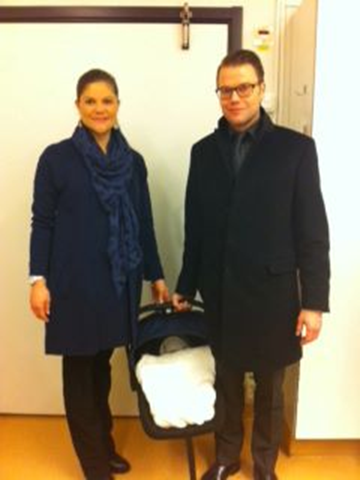 This is the only picture of her made pucblic so far:
Princess Estelle Silvia Ewa Mary, Duchess of Östergötland.
With her parents Crown Princess Victoria and Prince Daniel.
Photo from the Royal Family’s Facebook page.

As soon as the birth was announced (see my news post from yesterday: A Princess Is Born), name speculations started. Today when I got home from my morning grocery shopping, I turned the TV on. The name had just been officially announced, and the TV hosts were obviously a bit surprised and bewildered at first about the choice. It took them a while to get their bearings and find the background for it. I wonder if I was the only one reacting with an “Of course!”  and wishing I’d actually thought of making a serious guess of it…

If you look back to a post of mine from two weeks ago, Postcards from the Past, I think that’s where I first mentioned the fact that my p.grandmother’s half-sister Gerda was employed as chamber maid or similar to Estelle Manville-Bernadotte, American wife of the well-known Swedish diplomat Folke Bernadotte, related to/member of our royal family.

Folke Bernadotte also earned his own place in history as a Swedish diplomat noted for among other things his negotiation of the release of about 31,000 prisoners from German concentration camps during World War II. After the war, Bernadotte was unanimously chosen to be the United Nations Security Council mediator in the Arab–Israeli conflict of 1947–1948. He was assassinated on Friday 17 September 1948 by members of the Jewish nationalist Zionist group Lehi (commonly known as the Stern Gang or Stern Group).

On 1 December 1928 in New York City, Folke Bernadotte married Estelle Romaine Manville (born in Pleasantville, New York, 26 September 1904; died in Stockholm, 28 May 1984), whose family had founded part of the Johns-Manville Corporation. They had four sons, two of whom died in childhood, and seven grandchildren, all born after Bernadotte's death.

I have not yet found out at what point in history my great-aunt Gerda came to work for them. I’m hoping to maybe find some clue among the old postcards as I continue to examine these. If I don’t, I may try and think of some other way to find out, because I’m really getting very curious!

Anyway, my immediate reaction to the royal announcement today was that the name could hardly have been more perfectly chosen. It’s a stylish old name not worn out by recent popularity but not sounding too odd either. It’s got a French ring to it that goes well with the name Bernadotte. It’s got royal connection as pointed out above, but at the same time Estelle Manville was not born royal - just as the new little princess Estelle’s father Daniel was not! And it indirectly commemorates a member of the royal family whose life’s work really deserves to be honoured.

I’m sure my grandmother Sally would have loved it. She was a big fan of the royal family – partly, I suspect, because of her sister working for them! When I was visiting my grandparents in childhood, I used to go through old weekly magazines from the 1940’s and early 50’s that my grandmother had saved. They had lots of articles and photos of the royal family then living at Haga Palace (which Crown Princess Victoria and Prince Daniel have now taken over as their residence). 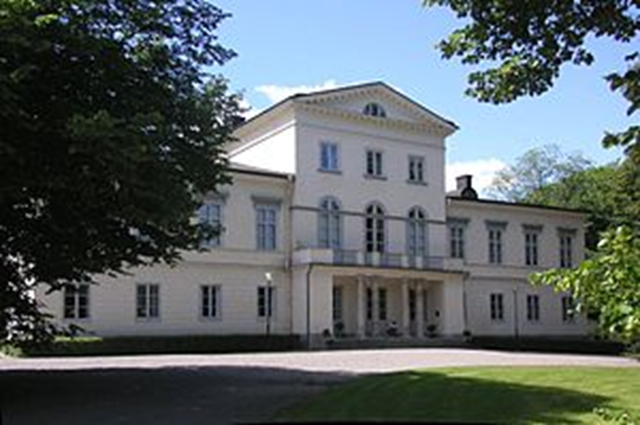 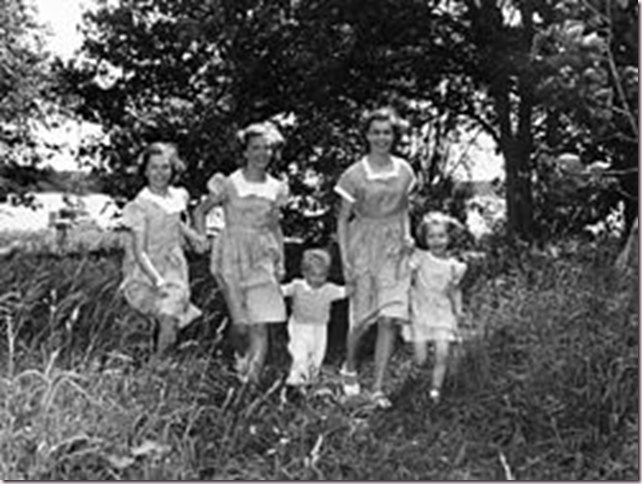 Our present King Carl XVI Gustaf (in the middle), with his four older sisters, at Haga in 1948 (from Wikipedia). Back then, the Swedish constitution did not allow girls to inherit the throne – so the nation kept waiting and waiting for that little prince…!

Flashbacks, flashbacks… They had the royal princesses as paper dolls in those old magazines and I cut them out and played with them, when visiting my grandmother. I think the magazines may still be upstairs beneath a lot of other rubbish in a closet. If I had not cut out the princesses (and other things) back then in the early 60’s, the old magazines might have been valuable today. But I did. So they’re probably not!!!

So the fanatic royalists are deliriously happy now about a new little princess at Haga; while some fanatic anti-royalists grumble and would rather have the family turned out on the street; and one or two feel sorry for the poor little princess who will grow up with no control over her own life as she is Destined to be Queen and will never know what it is to have a Normal life.

As for myself, I can’t say I’m a fanatic royalist – in some ways monarchy does seem a bit outdated – but on the other hand I’m very far from convinced that as a nation we’d really be better off with another system, at least for the near future. So I wish them well. I think as queens go, Victoria seems well qualified to do a good job of it. As for Estelle, she’ll get a better start in life than most, but no doubt her own share of troubles as well.

Posted by DawnTreader at 14:44