A Princess Is Born 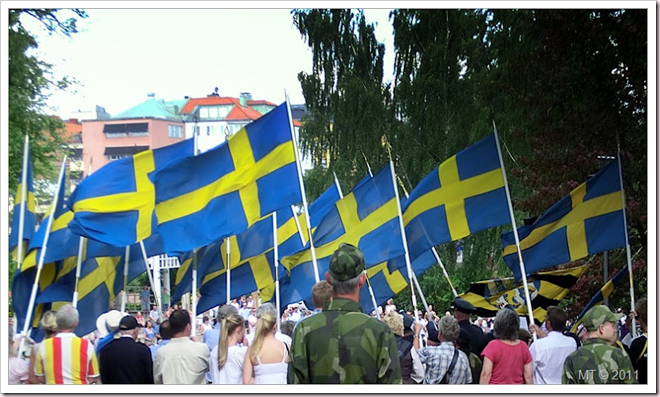 The photo is mine, from Sweden’s National Day 2011

STOCKHOLM — Sweden's Crown Princess Victoria gave birth to her first child Thursday, a baby girl who will one day become queen, prompting banner headlines and 21-gun salutes across the country.

Both the crown princess and the baby are "doing very well," an emotional Daniel told reporters who had waited for the announcement all night at the Karolinska University Hospital in the Stockholm suburb of Solna.

"My feelings are a bit all over the place," he said, switching to English mid-sentence.

"When I left the room, the little princess was sleeping on her mother's chest and they were looking very cozy," he continued in Swedish, folding his arms as if cradling a baby.

Victoria, 34, is next in line to the throne held by her father since 1973. Sweden changed the constitution in 1980, three years after Victoria was born, to allow the eldest heir to inherit the throne regardless of gender. Before that female heirs were excluded. Sweden's last female monarch was Queen Ulrika Eleonora, who ruled for just one year until 1720.

Victoria married Daniel, 38, a commoner and her former personal trainer, in June 2010.

As is custom when an heir to the throne is born, the Swedish Armed Forces celebrated the news with two 21-gun salutes at noon in Stockholm and other cities.