Time for a Semla 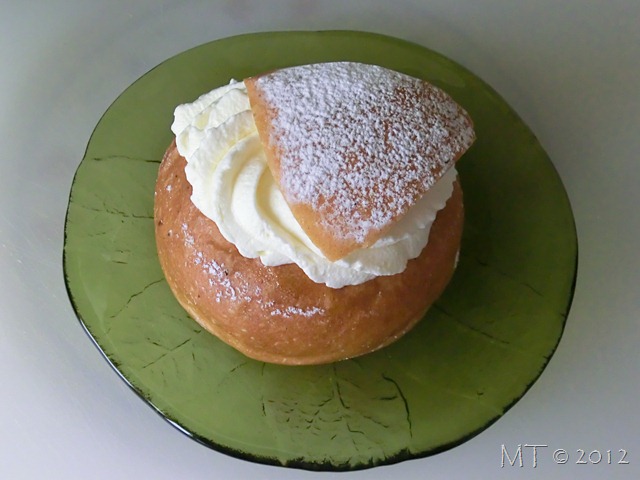 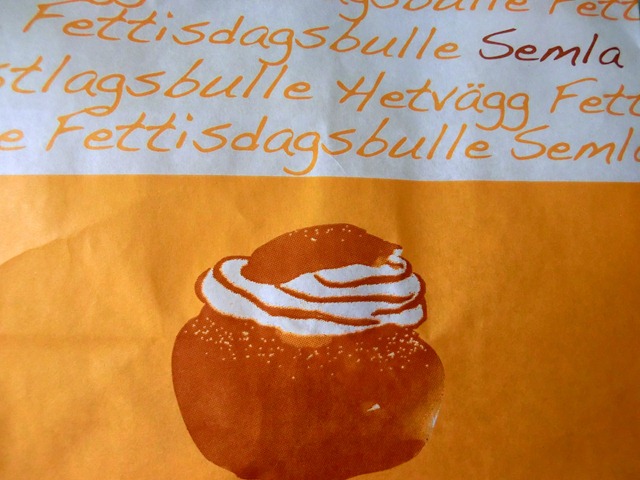 A semla (also known by a few other names in Swedish), is a traditional pastry in Scandinavia, associated with Lent (the period from now until Easter in the Christian liturgial year) and especially Fat Tuesday /Mardi Gras /Shrove Tuesday, which is today.

The name semla (pl. semlor) is a loan word from German Semmel, originally deriving from the Latin semilia, which was the name used for the finest quality wheat flour.

The first version of the semla was a plain bread bun, eaten in a bowl of warm milk. Today, the Swedish semla consists of a cardamom-spiced wheat bun which has its top cut off and insides scooped out, and is then filled with a mix of the scooped-out bread crumbs, milk and almond paste, topped with whipped cream. The cut-off top serves as a lid and is dusted with powdered sugar. Today it is often eaten on its own, with coffee or tea. Some people still eat it in a bowl of hot milk.

Nowadays there are some bakeries and cafés that have them all year round, but they still traditionally primarily belong to the period between February and Easter, and some still consider it ‘cheating’ to start eating them before the first week of Lent, or any other day than Tuesday.

In my childhood, in my family, we had them every Tuesday from Shrove Tuesday until Easter, as dessert after dinner (which we ate when dad got home from work, around 5 pm), and served in the old traditional way in a bowl of hot milk; the milk also sprinkled with cinnamon.

To me they’re still connected with Lent and I don’t eat them any other time of the year. I usually don’t eat a lot of them during Lent either because they’re not all that much of a favourite with me. But I guess I usually have at least one, some time during this period. Sometimes more; depending a bit on company (or lack of), and if I happen to pass by a bakery/café which I know have really good ones.

Yesterday, going home from the hospital/rehab pool, I just missed a bus in town and had to wait 15 min for the next. When that happens, I often pop into a bakery shop/café near the bus square (Lulu’s) to buy bread there – a bit of a change from the brands in the grocery shops and supermarkets. This bakery also happens to make a very good semla. Not that I’ve personally been round to all the bakeries in town tasting their semlor. But the local newspaper does that. Last year Lulu’s won. This year they were out of the competition and instead on the jury!

Anyway. As you might already have guessed, what this ramble is leading up to is that I bought (and ate) my first semla of the year yesterday. I no longer eat them with milk (for one thing I’m lactose intolerant since about 20 years back) so had it with my afternoon cup of tea. I have to say, that bakery does know how to make them. But they’re big, and very filling. After eating it, I was suddenly hit by an overwhelming desire for a rest. So I lay down on my bed to listen to an audio book for a while… and woke up around three hours later!

In my defense – and the semla’s – I did have rather a tiring day before that. First the rehab pool and then lunch and then going out again to buy flowers and then changing the kitchen curtains.