About ten years ago, I got a wrist-rest like this with built-in mouse – called a Rollermouse – as a handicap aid to use with my computer. I got it on ‘permanent loan’ for free and very grateful for that, because back then I had very little money and an uncertain future (this was before I got my handicap pension) and it was a big help since I had (still have) problems using a regular mouse.

I should perhaps add that back then I had an old desktop computer. Now I use it together with a separate keyboard when I use the laptop in the study. 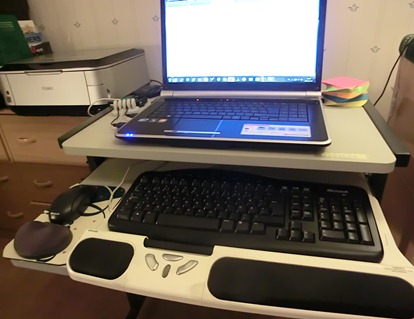 A few years ago, the Rollermouse showed a tendency to sometimes go partly on strike. It was the clicking of the roller-bar that stopped working. It was like that for a while, on and off, with my old laptop. But when I got my new laptop – ‘Bella’ - two years ago, then suddenly the Rollermouse started to work perfectly again with that computer; and has continued to do so, until a few days ago. I’ve connected and disconnected it any number of times during the last two years without problems. Until…

…. the other day it suddenly partly went on strike again, and wouldn’t reconnect whatever I did. When I realized how long I’d had it – really, 10+ years is quite a long time for any computer-related device! – I decided to just buy a new one of my own, since I can now afford it. Last night, I searched and found a web-shop from where I could order and pay by invoice, and on top of all it was on sale just now, and no extra freight cost. So I ordered one.

It’s just that… Guess what I just realized? In the meantime, the old one has once more mysteriously popped back into working order and is again responding as it should! Well, never mind… Actually the gel filled wrist-supports are getting worn too.

Anyway, it struck me that some of you might never have heard of the Rollermouse, and as I also happened last night to come across some YouTube demos of it, I thought I’d introduce it to you.