Until now, my ABC Wednesday posts, apart from following the alphabet, have been about quite random things. It occurred to me last week, that I might try to focus more specifically on Sweden in these posts. And why wait until the next round? Actually the letter T is as good as any to start, because…

Trollhättan is the Swedish town where once-upon-a-time I was born and bred. I lived my first 20 years there or in the vicinity of it.

The town is situated in the province of Västergötland in Sweden (about 100 km north of where I live now). Through the town runs the river Göta Älv (connecting Lake Vänern with Gothenburg [Göteborg] on the west coast).

Trollhättan is famous for its locks and waterfalls, which attract lots of tourists to the area each year.

For centuries, the falls at Trollhättan were an obstacle for boats travelling the river. A first set of locks was completed in 1800 … 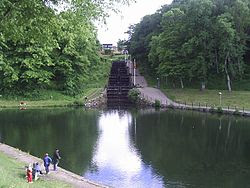 … followed by a bigger set completed in 1916, which are the ones still in use.

The maximum dimensions for a boat to traverse the canal are:

In the late 19th century, hydropower was developed in Trollhättan. The Swedish energy corporation Vattenfall ("waterfall") took its name from the falls in Trollhättan.

The waterfalls are shown to turists during the summer. In May, June and September only on Saturdays, in July and August every afternoon at 3 pm. It’s a spectacular view with 300,000 litres of water per second rushing by.

One weekend in July each year there is also a Waterfall Festival with more frequent showings of the Falls including night shows with lightning (see the first picture above).

Below is a video which shows the water being let on. The name of the town means Troll’s Hat (bonnet). The place is mentioned in literature from 1413. The “hat” is supposed to refer to the rocks at the falls. In local folklore people used to believe they saw trolls and elves dancing in the mist that arose from the falls. (Watch the video closely and you might catch a glimpse of them!)

Historically, Trollhättan housed a lot of industries, like NOHAB that produced railroad locomotives, and the main production site of Saab Automobile. Since the years when I used to live there, several of the old industries have closed down or gone through mergers with foreign companies etc though.

The town now has a new nickname: Trollywood, as it has become a center for Swedish film production. About half of the Swedish full-length films are produced there these days. 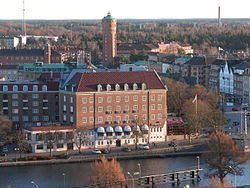 My parents moved to Trollhättan in 1955 shortly before I was born. My father got his first job as an engineer with Vattenfall (then a public utility) and he remained in their employ until his retirement.

We lived in a town flat until I was five, then moved to a village outside town. From 7th grade (junior high) I went by bus to a school on the outskirts of town. For ‘senior high’ I went to school in the town centre. 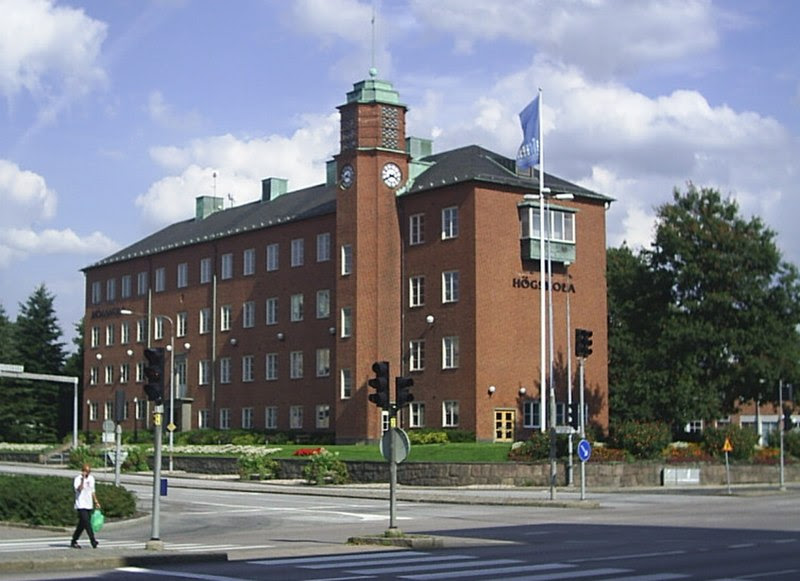 At the age of 20 I moved away from home and went to live and study elsewhere.

When my dad retired from work in the early 90’s, my parents moved back to dad’s childhood home near Borås.

Actually I’ve not been back to Trollhättan after my parents moved away from there – which means not for 20 years. I may have passed through a couple of times, but not properly visited.

The photos above are all copied from official websites. In my own photo albums, I can’t find a single photo that properly shows “the town” (or the falls, or the locks). Back in my teens, I was obviously more interested in people than in landscapes and architecture!

Posted by DawnTreader at 19:24